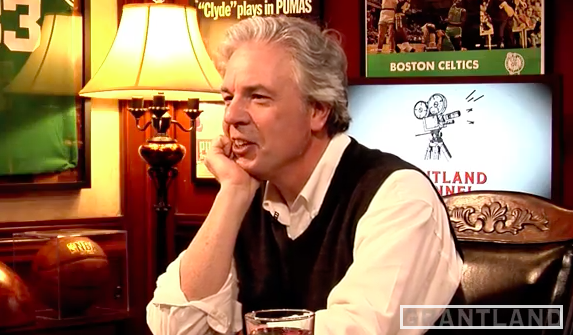 With Bill Simmons and ESPN agreeing to publicly part ways before the end of his contract in September, we’ve been wondering what’s next for Grantland in this period of limbo.  Just over Memorial Day Weekend, we noted that his picture was taken off the ESPN.com homepage as the face of Grantland.  Perhaps that was an omen for the news that would be announced today – Grantland has a new interim Editor-in-Chief.  And it’s Chris Connelly.

The veteran journalist, who has been working with ABC and ESPN for the past 14 years, will lead Grantland on an interim basis.  Here’s the announcement from ESPN:

Chris Connelly, the award-winning reporter and essayist whose work includes contributions to E:60, Outside The Lines, ABC News, Grantland and many other programs and publications, has been named Interim Editor-in-Chief of Grantland.

“We are thrilled to have a journalist of Chris’ caliber join us on an interim basis as we go forward and build on the smart, fun, adventurous, creative, unexpected and vital spirit of Grantland,” said Marie Donoghue, ESPN’s executive vice president, global strategy and original content. “Chris has been an award-winning journalist and storyteller in sports, music and pop culture for over three decades, and as a longtime contributor at Grantland, he appreciates the incredible team we have assembled.”

Added Connelly, “Bill Simmons had the vision to create Grantland, and his leadership, ideas, and inspiration made it singularly great. I’m looking forward to helping the writers, editors, and producers on this amazingly talented staff create more of the outstanding work for which they’ve rightly become known.”

Engaging in multimedia storytelling has been central throughout Connelly’s career. Stories that he has reported and written have won four Sports Emmys and seven Edward R. Murrow Awards, as well as a Prism, a Gracie, and a National Headliner Award. He has also served as a consulting producer for ESPN Films’ 30 for 30 documentary series, was part of the team to prototype ESPN The Magazine prior to its launch and has moderated yearly filmmakers’ panels at the Tribeca/ESPN Sports Film Festival.

Although Connelly’s naming as Grantland Editor-in-Chief initially caught me by surprise, it’s a move that really does make sense when you examine it from all angles.  Connelly may have been a peripheral figure at ESPN over the last several years, but when you look at his resume he might be one of the select few people at ESPN who has the resume necessary in both sports and pop culture to lead Grantland through this transition period.  With his work at ABC/ESPN and his past career at MTV, Rolling Stone, and Premiere, Connelly has enough experience and credibility in both worlds to be able to sustain the work that Simmons has done to build Grantland.

Connelly tweeted this on Wednesday afternoon:

Excited to be joining @grantland33 as interim editor-in-chief. Hoping to continue the great work of Bill Simmons and this superb staff.

Connelly may not have the millions of followers that Simmons does or the buzz associated with all the comings and goings of his predecessor, but he does have the journalistic bonafides.  Additionally, he’s already done plenty of work for Grantland in the past so it’s not like he’s a complete stranger to the staff or the audience there.  And he’s officially replaced Simmons on the masthead.

The future of Grantland might be the biggest question with Bill Simmons gone from ESPN as he drove a good chunk of the traffic associated with the site.  With Chris Connelly now on board, it’s at least a sign that ESPN is still going to try to do everything they can to keep going and growing in the post-Simmons era.