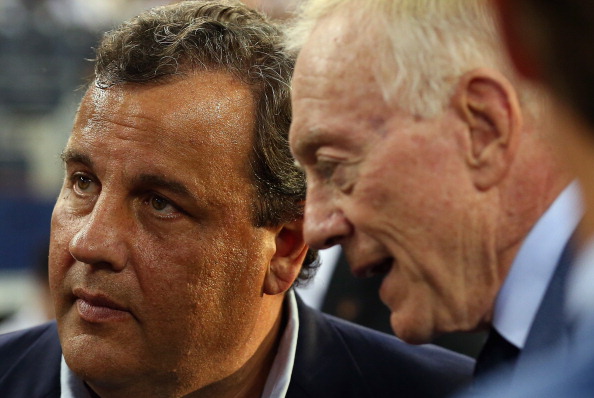 I’ll be honest with you – I could care less about Chris Christie’s Cowboys fandom and his budding bromance with Jerry Jones.  However, it’s been a major narrative during the last few weeks of the NFL season.  Christie is a polarizing figure politically speaking and certainly one of the most notable guests to appear in an NFL owner’s box.  Who the Governor of New Jersey cheers for in his professional sports teams seems like torturous cable news filler, but I guess I’ll have to admit I’ll never understand what classifies as news in this country.

Ever since being spotted alongside Jerry Jones, we’ve been flooded with stories about Christie and the Cowboys.  It all came to a climax when Christie was spotted hugging it out in the Cowboys owner’s suite after their playoff victory over the Lions last week.  Unfortunately, this Vine was shut out at the Golden Globes last night..

After that footage went viral, and with the governor in attendance at Lambeau Field for the Cowboys-Packers Divisional Round game, one would think it’d be a mortal lock that we’d get plenty of Chris Christie reaction shots on Sunday.

In spite of it being a close game throughout with many twists and turns, Fox Sports gave us zero shots of Christie and Jones.  It was an eyebrow-raising 180 from the previous week, but the network says there was no specific directive or request from on high not to show him on television.

Fox: Lack of showing Jerry and Christie didn’t have to do with a request not to show them

It’s hard to imagine Jerry Jones EVER denying any television time, so conspiracy theorists could have a field day assuming that Christie and his handlers didn’t want any more publicity over his Cowboys fandom given the story it had become.

But there could very well be a much simpler and sensical reason – Fox simply couldn’t get a good shot of Christie and Jones.  Even before the game, NFL on Fox director Rich Russo told the New York Daily News that the Lambeau Field setting would probably not allow for a shot into the Cowboys’ suite and that Christie’s presence was an afterthought for the telecast:

“It may very well be impossible to see (what’s happening in the owner’s box) because it’s an afternoon game,” Russo said. “And if it’s sunny there will be a lot of glare. We may not be able to see into those suites.”

“We do things instinctively. Things happen quickly,” Russo said. “If we feel a shot of an owner is pertinent at the time, we may show him. If the governor happens to be there Sunday he’s there, but I’m not even thinking about that. There are more important, much more important, pictures to get and they are all on the field.”

Quite frankly, it was refreshing to see Fox keep the focus completely on the field on Sunday during such an important game.  While Chris Christie might be fodder for cable news and blog posts, it has nothing to do with the game.  It’s a philosophy that would serve other broadcasts well, especially as we prepare for the 10,000 shots of Patriots owner Robert Kraft during next week’s AFC Championship Game.