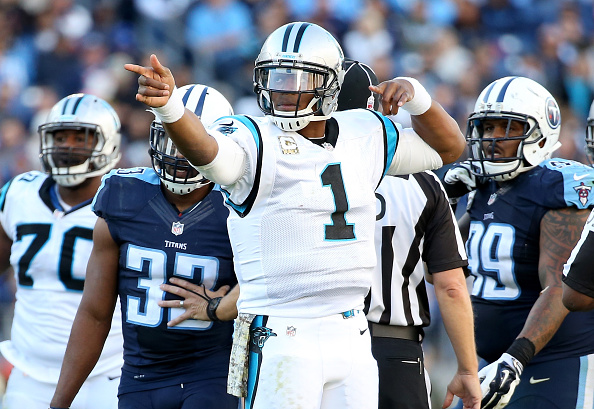 At 9-0, the Carolina Panthers are loose. Footloose.

The Panthers have been tweeting Tuesday morning in response to backlash thrust toward Cam Newton after his touchdown celebration against the Tennessee Titans on Sunday got a little too…gyrating?

That tweet, again, is from the official Panthers feed on Tuesday morning, posted clearly in response to the Charlotte Observer posting a letter from a concerned mother in Tennessee who happened to be in the end zone with her daughter at the time of Netwon’s pelvic gesticulations.

We are all dumber for having read this… https://t.co/e0RVUwEUiH

The letter, penned by Rosemary Plorin of Nashville, attacked Newton for his dance, going so far as to blame Newton for what her daughter was hearing in the stands by Titans fans after also witnessing his dance.

Because of where we sat, we had a close up view of your conduct in the fourth quarter. The chest puffs. The pelvic thrusts. The arrogant struts and the ‘in your face’ taunting of both the Titans’ players and fans. We saw it all.

After falling back on the role model trope for a few graphs, the woman brought her daughter back into the mix, explaining the questions her daughter started asking, like “is he trying to make people mad” and ” do you think he knows he looks like a spoiled brat.”

"But how do I explain this to my kid?" is the best parental cop-out of the 21st century

Clearly the Panthers don’t think Newton looked spoiled—can one look spoiled after carrying his entire team on his back—tweeting out the images they did on Tuesday. They probably got a kick out Plorin’s response as much as the rest of us.

I didn’t have great answers for her, and honestly, in an effort to minimize your negative impact and what was otherwise a really fun day, I redirected her attention to the cheerleaders and mascot.

Yes, sir, Mr. Newton. Your gyrations, chest puffs, pelvic thrusts and arrogant struts were disgusting. They could see it all, so Ms. Plorin had no choice but to direct her daughter’s attention to the Titans cheerleaders.

Let’s get serious for one second. Cam Newton almost died in a horrible car accident less than a year ago and not only did he come back in miraculous fashion to help his team advance in the playoffs, the guy is carrying the Panthers offense on his back—on his recently broken back—this year, accounting for 21 of the team’s 26 touchdowns.

That letter to the editor just screams false flag. Trying2 get inside Cams head to shake his confidents. Has Belichick written all over it.

Role model or not, I’m sure Newton understands how a Titans fan could have been frustrated this past weekend, and has to realize why people might take it out on him. Certainly the Panthers Twitter feed does. Right guys?

Of course, there’s a bigger national conversation from just this one mom, and as Will Brinson of CBS Sports pointed out on Tuesday, there’s an obvious racial component to it.

So the lesson here for your nine year old—or whoever you teach your lessons to—is that dancing is okay when you’re a back-up celebrating like mad on the sideline, but wrong when you do all the work on the field and want to celebrate in the end zone. Or maybe it depends on the gyrations.