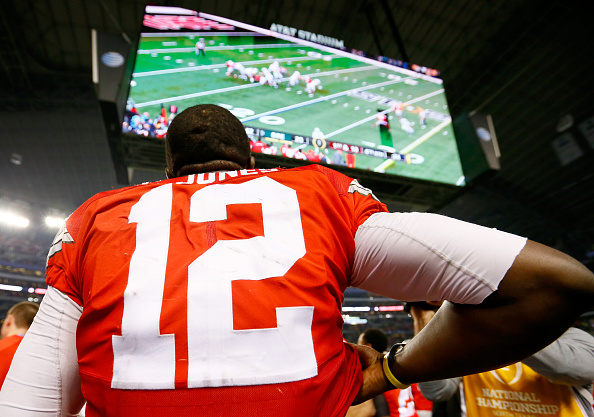 The Legend of Cardale Jones is the best story in sports at the moment.  It’s the story of a third string quarterback coming out of nowhere to come off the bench to lead his team to victory in three straight trophy games, including conquering the unconquerable SEC and then winning a national championship.

Jones called a press conference yesterday in his native Cleveland to announce his decision on turning pro and going to the NFL or staying in school.  The existence and location of the announcement at the Ginn Academy seemed to be a sign Jones was coming out.  Instead, Cardale surprised us all over again and announced he was staying in school because of the importance of his education and not quite being ready for the NFL.

Jones’ story remains too good to be true.  A college athlete who not only stepped up when his number was called, but one who has been completely transformed on the national stage from the days of his infamous “play school” tweet.  Now he’s promoting the idea of getting his degree and valuing his education above being a first round pick to his community.

And yet, there were voices in the media wagging their finger at Jones and shaming him for doing so.  Shocker.

And then there’s Mike Florio, who thinks Jones holding this press conference will be a decision that will apparently haunt him for the rest of his life…

If it was simple, why a press conference? Why the hubbub? Why the pomp and/or circumstance?

“I don’t know why you guys made this such a big deal,” Jones said.

So why call it a “life-changing decision”?

Yes. He’s now going to be viewed as a guy who indulged in a goofy publicity stunt when all he had to do to stay in school was to do nothing.

Why did Jones hold the press conference?  To set an example for the people of his hometown.  WHAT A MONSTER!!!

Ted Ginn Sr. said Cardale wanted to hold press conference to be an example for city he loves

As many sensible people have pointed out, Cardale Jones holding this press conference is not unique in the history of college football.  Peyton Manning did it at Tennessee without offending the sensibilities of the sportswriting elite.  Mississippi State QB Dak Prescott held a press conference announcing his return to school JUST THE DAY BEFORE and didn’t receive one percent of the seriously concerned media scolding.  Even a Scout writer covering Mississippi State criticized Jones as “#pretentious” while defending Prescott’s decision to do the exact same thing.  It’s literally unbelievable to compute how this is possible.

I don't get this whole need to have a press conference at your high school to announce you're staying in college. #Pretentious

@thetreyschenzel Seriously? Dak was one of the top players in America most of the season and there was talk of him coming out this year.

While this seems absurd, it does shine a light on something that rings very true: by and large players can’t win when it comes to the media.  Unless you play exactly by their rules and ask “how high” when they say “jump” there’s always going to be something to take umbrage over.  Cardale Jones got built up enough.  Now it’s time to tear him down.

Jones got raked over the coals for his infamous tweet a couple years ago and making a mockery of the “student-athlete.”  Now Jones talks about valuing his education and staying in school and he also gets ripped.

Marshawn Lynch follows one of the greatest runs with one of the worst press conferences. NFL should note, "thank you" isn't an answer.

Do we want our athletes to just shut up and do as they’re told?  If they have something to say, should they just do it on Twitter or in a carefully crafted PR statement so they aren’t drawing any unnecessary attention?

Or do we want our athletes to be an open book and give us the access and the quotes and the material we desire?  Do we want them to stop answering questions by repeating “I’m thankful” 100 times no matter what the question might be?

Because right now the media wants it both ways and the lesson right now for athletes across sports is that they just can’t win.