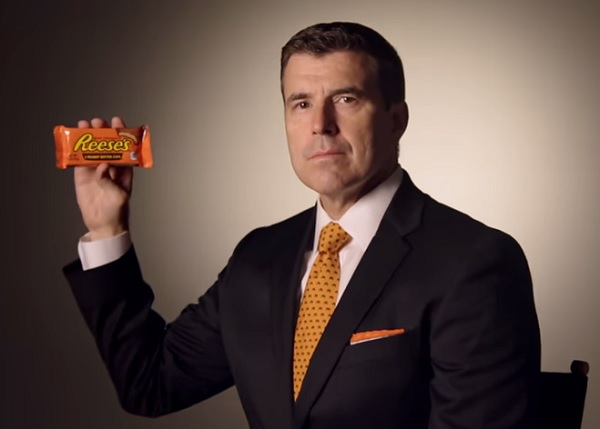 With two shows under his belt as the new host of ESPN’s College Gameday, big things are happening for Rece Davis.

Many of us have done something special to signify a new job getting off to a successful start, something that shows the world that you are doing well. Some of us might buy new clothes or whiten our teeth. (Or color our hair, in the case of Colin Cowherd.) Others might buy a new TV or even a car. Rece Davis is changing his name.

More specifically, the ESPN personality is changing the spelling of his first name. From now on, Rece Davis will be known as Reese Davis. Hey, that’s just like the peanut butter cup, you might be thinking. And you would be correct. (If you were wondering if Davis was a huge fan of actress Reese Witherspoon, well, maybe he is. But that’s not why he’s doing this.) It’s exactly like the peanut butter cup. And it’s not a coincidence.

Davis is changing his name as part of ESPN’s partnership with Reese’s, which is the official candy sponsor of College Gameday, if you didn’t already know. (And really, how many of us did?) But we surely will know and probably won’t forget every time we see Davis on screen or his name is shown.

This is really happening. Just in case you needed confirmation, here is an official video of Davis holding up and eventually enjoying his favorite candy and new namesake.

If one minute of Davis holding up a package of Reese’s Peanut Butter Cups, glaring at the camera, unwrapping a cup, taking a bite and letting the ecstasy/sugar rush wash over him is a bit too much (or you’re a busy person and prefer something shorter to watch on your phone), there are also 30-second and 15-second versions of the big moment available online.

What exactly was Davis thinking (besides the obvious financial benefits or perhaps lifetime supply of candy for him and his family coming his way)? He shared that decision-making process with For the Win’s Nate Scott:

“I do have a great affinity for sweets, desserts, and probably from the time when I was a little kid and saw those old commercials with the stuffy English dude gets peanut butter on his chocolate, and the other guy gets chocolate on his peanut butter, I became fixated on Reese’s. One thing I thought when I was presented with this opportunity is why can’t they change their name to my spelling, but it turns out they’re a little bit bigger deal than me.”

Davis went on to explain that with his new name, he could let his hair down, be more “out there,” and perhaps be more adventurous. That’s probably not a bad thing when hosting a weekly live three-hour program from a college campus surrounded by wild, sleep-deprived, surely over-caffeinated students and college football fans.

By the way, there’s no word yet on whether or not Lee Corso is attempting to change his name to “Lee” in a partnership with Lee jeans. Who’s the official jeans of College Gameday, anyway?