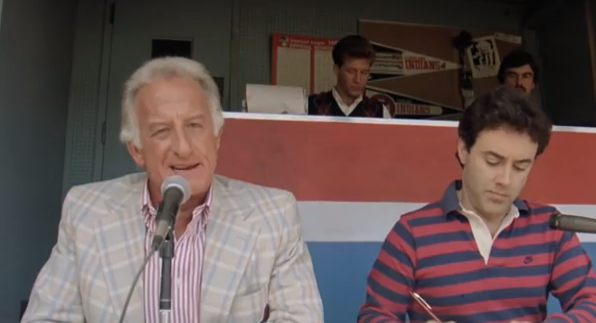 When it comes to great performances by real life announcers in sports movies, there’s only one clear choice for the best ever – Bob Uecker as Cleveland Indians announcer Harry Doyle in the Major League movies.  (Bob Costas telling Al Michaels to feel his nipples in BASEketball is a close second.)

Uecker was so good as Doyle in the Major League movies that it’s almost too easy to forget his actual career behind the mic.  Uecker was inducted into the Baseball Hall of Fame in 2003 as a broadcaster and has been calling games for the Milwaukee Brewers for over 40 years.

But this season, the Brewers will honor both the real and fictional version of Uecker with a Harry Doyle bobblehead night when Milwaukee hosts, you guessed it, the Cleveland Indians:

The one and only Harry Doyle (aka Bob Uecker) is immortalized in bobblehead form, Tuesday, July 21 as the Brewers host the Cleveland Indians during Major League™ Night at Miller Park. Fans who purchase this special Major League Night ticket package will receive a limited-edition talking Harry Doyle bobblehead with famous quotes including: “This guy threw at his own kid in a father-son game”, “Personally, I think we got hosed on that call” and “Juuust a bit outside.”

Somehow, some way, I’ve got to find my way to Milwaukee to get me one of these.  Also: they have talking bobbleheads now?  When did that happen!

The only way this could be better is if Uecker calls the game as Harry Doyle.  If that happens, we might as well shut it down because that would be the zenith of sports broadcasting.