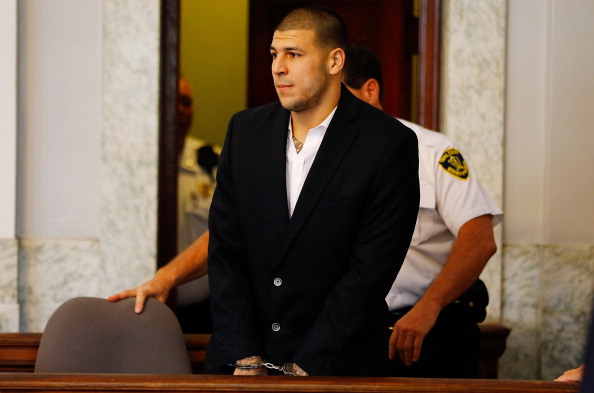 Aaron Hernandez’s ongoing murder trial appears to have led to one of the worst newspaper columns in quite some time, written by Peter Gelzinis of The Boston Herald. In a piece published this week (but sadly, not on April Fool’s Day), Gelzinis manages to hit the jackpot of combining racially charged and misogynistic tropes with his comments about Hernandez’s fiancée, Shayanna Jenkins. Here’s how he starts it off:

To be honest, Shayanna Jenkins was not at all what I expected. From those icy stares Aaron Hernandez’s fiancee has flashed in her previous appearances at the Fall River courthouse, I braced myself for Lil’ Kim.

But what I got Friday from Shayanna’s first appearance in the witness chair was a lot closer to Halle Berry.

I was not prepared for her composure, or the graceful way she kept deflecting so many of Bristol County prosecutor William McCauley’s questions with, “I don’t recall.”

Not a grunt. Not a snarl. No curses mumbled under her breath that would force the judge to remind her she was in a court of law.

In short, Shayanna Jenkins betrayed no echo of the mean streets and dance joints that her $40 million tattooed fiance liked to haunt in those evil hours before the dawn.

There are a whole lot of problematic assumptions and stereotypes in there, but Gelzinis somehow manages to make things even worse as he continues:

When the police showed up one night at the Hernandez McMansion and the beams from their flashlights pierced the blinds of the couple’s bedroom, Shayanna told McCauley how she was able to peer down at the nosey cops “… with our Smart Home (camera) System.”

Spoken like a woman who should have married someone like Julian Edelman or Malcolm Butler, instead of the thug who texted pathetic notes like this after an all-night blowout: “Too (expletive) up an O (Lloyd) took care of me. … I jus woke up buggin im sorry and on way home.”

When McCauley asked Jenkins what she thought “buggin ” meant, this woman wrinkled her beautiful face into a frown and said, “Out of your element.”

If this whole column-writing thing doesn’t work out for Gelzinis, it sounds like he wants to start a business matchmaking NFL players with attractive women. While discussing who Jenkins “should have married” is bad enough, he still manages to top it later on:

She appears to know she’s trapped in a cesspool. It’s too bad, because Shayanna might well have made some NFL stud a very nice trophy wife.

So, to recap, Peter, you know so little about this woman that you were “expecting Lil’ Kim” based on her appearance and facial expressions, but because she appears attractive to you and talks eloquently, you’re not only willing to suggest other NFL players she should have married, but also to proclaim that her life goal is to be a “very nice trophy wife?” That’s more than just a little bit troubling.

Readers are rightfully taking Gelzinis and the Herald to task for this latest piece of drivel, as they should:

The tabloid Herald doesn’t have the greatest reputation in many circles (although Editor and Publisher named it one of 10 newspapers that demonstrate “flexibility, creativity, sound judgment, and a commitment to high-quality journalism in some unique manner” in 2012); consider their highly-questionable role in the 2008 Spygate saga, for one thing. It’s also the place that hired Bill Simmons as a high school reporter, then gave him a host of menial tasks that drove him out of print journalism. So, we’re not exactly talking about a universally-respected bastion of journalism here.

Still, having a newspaper of any sort publish such a misogynistic and racist piece is another indication of the sports media landscape’s widespread problems with objectifying women, something we discussed last week thanks to a pair of Chicago radio hosts. The Herald deserves all the criticism it gets for publishing this particular piece, but the wider landscape has to change too, and it has to get to a point where this kind of material is clearly unacceptable. We’re obviously not there yet.