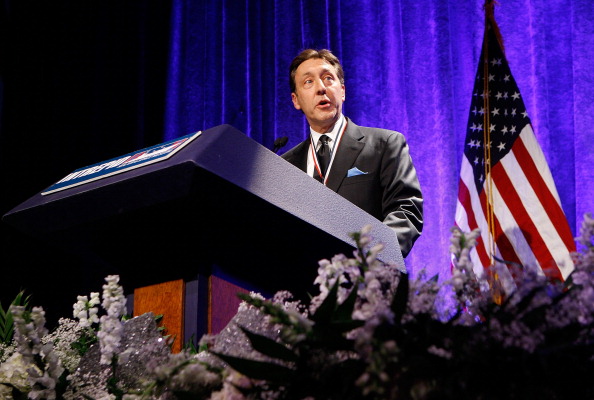 It seems to be an unofficial mandate. Every story about George Bodenheimer has to begin with the fact that he started in the mailroom at ESPN. The mailroom reference is used so often, it almost feels as if it is his middle name.

Bodenheimer himself even referred to his humble beginnings in the title of his new autobiography: “Every Town is a Sports Town: Business Leadership at ESPN from the Mailroom to the Boardroom.”

From 1998-2011, Bodenheimer oversaw an unprecedented period of growth, change and innovation in ESPN’s history.

“He is the guy who built ESPN from the great idea it was into the most significant, most influential multi-platform company in the world,” said his successor as president, John Skipper.

I recently had a chance to talk to Bodenheimer. Here’s my Q/A:

What do you remember about your first day at ESPN?

Bodenheimer: One of my recollections was I had to carry a small tree over to another building for one of the lawyers’ offices. The tree wasn’t particularly heavy but it was tall. I’m kind of walking through the legal department, the new kid the first day carrying a tree to a lawyer to decorate his office.  That was certainly a vivid memory of the first day.

In the book, you write you were struck by ESPN’s mentality of trying anything in those early days. How did that impact you?

I don’t think I ended up putting this in the book, but I talked about it a lot over the years.  When you’re president of ESPN, people want to know all about what the strategy is, what’s your strategy for going forward? Those are legitimate questions to ask the boss.  But I would say, ‘Here’s our strategy:  We’d try things, we’d try many things. Those that work we keep doing and try to make better all the time, and those things that don’t work, we stop doing.  That’s our strategy.’

I use that answer a lot. I know it’s an oversimplified answer to what’s the company strategy, but it’s kind of the culture of ESPN, and it was informed in those early days when we were just making it up as we go along. Let’s try the NFL draft, let’s try the early rounds of the NCAA college basketball tournament, etc. That’s really what got the company going.

How would you define the culture at ESPN?

I would say certainly optimism, like we can do it, passion, we love sports, risk‑taking, gee, if it doesn’t work, we’ll go on to something else, integrity, and I would say family.  It felt like a family out there, and I think those words, family, optimism, passion, integrity, hard work. I think that’s what defines the ESPN culture, and I believe it’s the company’s strategic advantage.

How would you describe the landscape when you took over as president? What did you see as the challenges at the time?

Well, surprisingly I had people telling me, ‘My gosh, you’re not going to be able to grow the company beyond where it is today. It’s already a success. It’s already big.  Good luck.’ And of course that didn’t turn out to be true, and it’s still not true today.  ESPN literally never stopped growing, 35 years later.

HD is a perfect example. I think it was ’03, there was no business model, and there were competing technologies. Everybody was kind of like saying, ‘Yeah, we know it’s a better picture, but what’s the model and what’s the technology?’ The ESPN company in following its mission knew that, ‘my God, the picture is that much better, we have to move in this direction.’ We launched first and established a wide lead in HD that was really beneficial to the company.

In the book, you describe a memorable meeting with Steve Jobs after ESPN launched its mobile phone.

Oh, I remember it vividly.  The first words out of his mouth after I introduced myself was “I hate your phone.”  I’m like, oh, my God.  We just launched the thing with much fanfare, we were trying to make it work, and my first meeting with Steve Jobs, these are the words out of his mouth.  It was certainly a reality check.  It turned out that, of course, he was right in terms of the business model we were on, that we were going to own the inventory ourselves, which was the wrong model.  But yeah, there you go. We shifted quickly and now have our mobile business is one of the fastest growing businesses at ESPN, and that’s only less than 10 years later.

During your tenure, ESPN greatly expanded its portfolio with expensive properties. What was your thinking there?

You can never go wrong acquiring world class programming. We went on quite a run there in the 2000s: Monday Night Football, the Masters, British Open, Wimbledon, BCS. We were very focused as the company’s strength grew to continue to acquire the very best product we could.

At the same time, stay focused on SportsCenter, the flagship of ESPN. That combination of sports news, journalism and events, those are the pillars.

What was your reaction when you learned about the Sports Emmys honoring you with the Lifetime Achievement Award?

I was very happy. The Emmy Award is the pinnacle award in our business, and I’m really proud to accept the award on behalf of the ESPN people and all the people that have worked there over the years.  I really think that I share this award with them. I think it’s a very nice recognition of what the company has accomplished over 35 years.  That’s how I view it.  That’s why I’m very happy about it.

Looking back, what stands out for you during your tenure?

If someone said, what were the highlights of your long tenure as president of the network, I know my answer to this question. You are going to laugh, but I’m saying it sincerely to you. The best part of the job for me was watching the ESPN people work together. I was at plenty of 50‑yard lines, plenty of courtside seats, plenty of everything in that job, and I loved that all, but the best part was working with the ESPN people and seeing them work together. That is how I feel.

What do you see for ESPN going forward now? Are we going to be watching, consuming sports completely differently in the 2020s than we do now?

Well, I’ll give you my favorite answer. I’ve given this answer for 15 years. I don’t know. But what I do know is that the ESPN people know their mission, and they’re going to collectively figure it out together because that’s what they do, and they’re passionate about sports. I don’t know if we’re going to be watching sports from the inside of a coffee cup or on clouds when we’re sitting on the beach. I don’t know the answer to that. But I do know that ESPN will be working very hard to be there and be there first because that’s what the culture of the company demands.