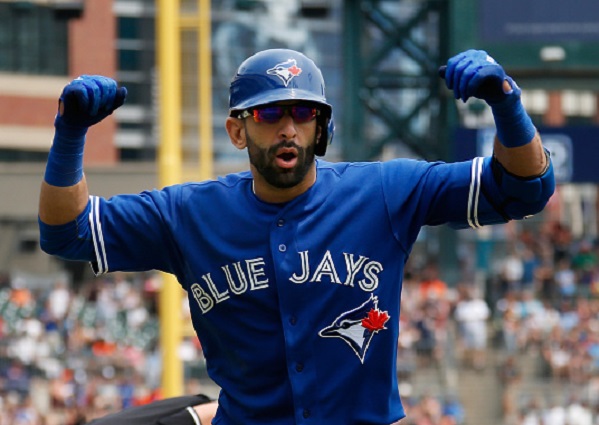 Sportsnet is the official regional broadcaster of the Toronto Blue Jays, and has been enjoying record ratings as the team is surging through August with a 17-4 record. Yet one of the Jays’ best players has been refusing to do interviews with the network.

As reported by the Toronto Star‘s Brendan Kennedy, Jose Bautista has been boycotting Sportsnet for the past three months to protest the network’s declining to pay for a designer suit rookie Devon Travis purchased as part of an on-air segment aired in May.

The outfielder has made it clear to Sportsnet executives that he won’t do any interviews with the broadcaster until it reimburses Travis for the cost of the suit (or given an equivalent gift certificate from the clothier). He believes the network took advantage of the rookie (who makes the major league minimum salary of $507,500), since it proposed the idea for the suit-buying segment. Bautista also apparently feels it’s necessary to make a stand for a rookie ballplayer who doesn’t have enough standing with the team and in the majors to speak up for himself.

According to Kennedy, Bautista has not done an on-field or postgame interview on the air with Sportsnet since May 12. Any interviews that with him that have appeared on the air were either part of group interviews with media or taken from other outlets, such as MLB Network Radio. However, Bautista has appeared on Sportsnet 590 The Fan, so this appears to be a dispute with the TV side of the network.

The question is whether or not Sportsnet paying for Travis’ suit would have constituted a conflict of interest. In his report, Kennedy talked to a journalism professor who thinks the network buying a suit for a player it covers would create a bad perception, that Sportsnet and the Blue Jays are too close. Yet both the network and baseball team are owned by Rogers Communications, so they’re already underneath the same corporate umbrella. Under such circumstances, is there really a breach of journalistic ethics?

And really, does journalism come into play during a softer, entertainment-type of feature? Yes, there was presumably a story in a MLB rookie buying some nice clothes with his new salary, perhaps for the purpose of wearing on road trips. Regardless of human interest, this isn’t exactly hard-hitting stuff.

Yet Bautista does have the right to decide whether or not he talks to Sportsnet. If he was refusing to speak to the media entirely, then perhaps the Blue Jays or MLB would have to step in and say being available to reporters and broadcasters is part of his job as a ballplayer. The journalism professor consulted in Kennedy’s article raises an interesting point in that it would be unethical if Rogers forced Bautista to do interviews on a network it owns. But that’s clearly not happening.

Travis is currently rehabbing a shoulder injury at the Blue Jays’ spring training complex in Dunedin, Fla. and didn’t provide a comment for Kennedy’s story. But it would be interesting to know if he believed he would be reimbursed for doing the TV segment or if Sportsnet gave such an impression in any way. Otherwise, Bautista is speaking up for what he sees as an exploitive situation, though it’s a curious stand to take.