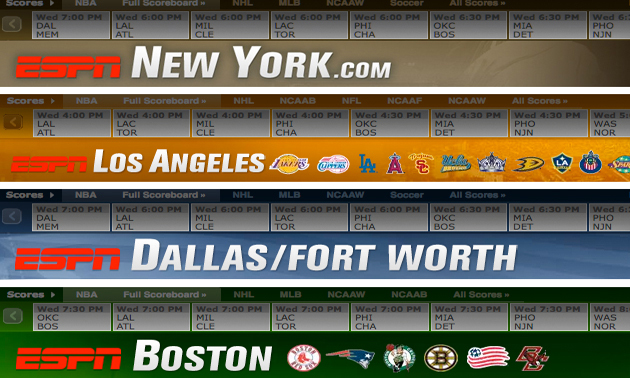 Last week we learned that that Fox Sports Regional websites were in the process of making heavy editorial layoffs. This week came word that the layoffs weren’t just a trimming of writers on Fox’s expansive network of regional channels, but rather the elimination of all of their writers. Below is a graphic of Fox’s network of channels if you’re unfamiliar. It’s hard to gauge how many writers were shed from each channel (likely dependent on market size and amount of teams the channel covered), but it seems likely a lot sites laid off a handful to a dozen writers each. Not good at all. 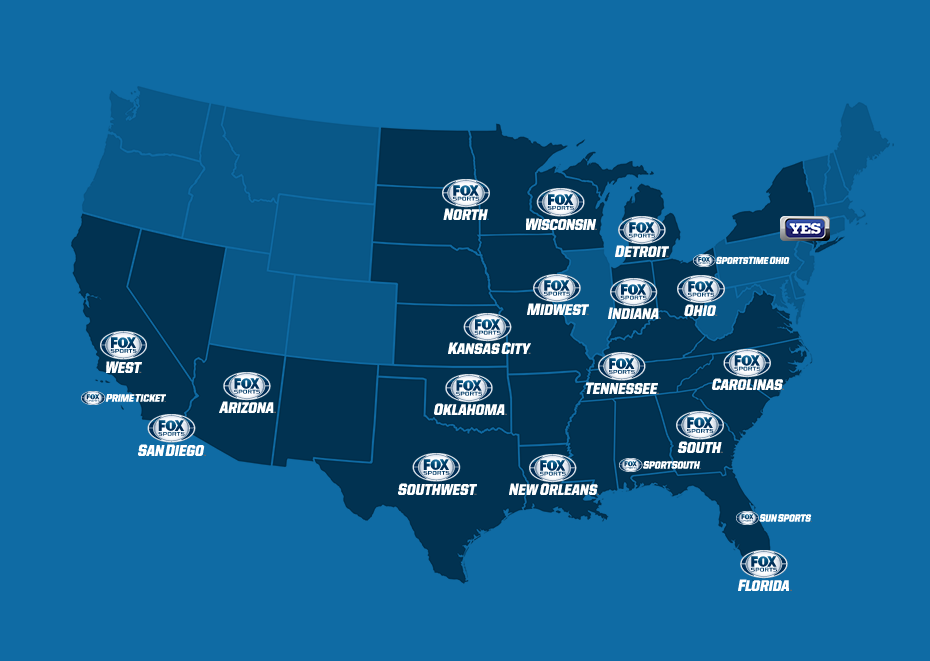 We’re not here to beat up on Fox for the layoffs although one questions if the carte blanche move across the board was necessary. Surely some writers had enough of a following where it made financial sense to keep them on. Regardless, they’ve been set adrift as Fox looks to focus on video and AP stories to fill in the gaps. Certainly a blow to these websites, but if they were losing money on their content operations, it’s hard to argue that a change wasn’t needed – although again, maybe not such a sharp change of course.

Hearing this unfortunate news led me to a bit of epiphany – The mainstream media local sports portal concept is dying with many players hovering around thinking of pulling the plug.

Rewind back a handful of years ago when this idea suddenly was a new exciting frontier in sports media. Some highlights: 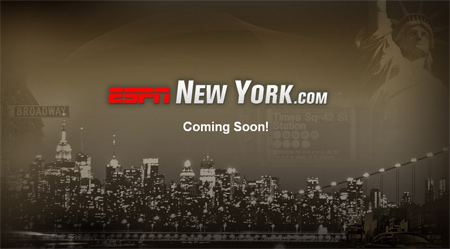 – Comcast bought The 700 Level and bolted it onto its Philadelphia regional site.

– Sports talk radio stations were getting into digital content, albeit with mixed results

– Fox, Comcast, and other sports regional channels and networks were adding more multi platform talent with an aim on digital content as well.

Perceived as a land-grab, everyone was mobilizing. Open up shop, raise the flag, get the content operation moving, and rake in the money. Claim your territory before someone else came into it and harvested sports fans in a local market.  If you were the incumbent local sports talk radio leader, you had to worry about the local sports regional channel. The regional channels had to worry about ESPN, who suddenly seemed interested in extending their fiefdom and drinking local media’s milkshake. SBN and others weren’t going to let the dust settle and jumped in as well.

Fast forward to now and SBN’s local portals are long gone, ESPN hasn’t launched any additional local sites beyond their initial batch and those still up are essentially shells that the Fox sites will likely soon mirror. The 700 Level is still doing quite well, but more importantly, Comcast and others haven’t opted to absorb high caliber local sports blogs despite the success they’ve experienced there.

While the regional network websites for Comcast, NESN, Fox, and so many others have had some level of success, an overly broad assessment would be regardless of their financial success or failing, the general feeling is there is very little of a cultural connection or habitual and addictive browsing. The ones I am familiar with seem to have a wide scope of content (video, podcast, blogs, photos covering different teams) and have substantial traffic, but just can’t seem to achieve that loyal readership and the social sharing and word of mouth that comes with it. I’m not sure they ever strived to be successful on that level, but then again why hire writers, why acquire a local blog, and why hire big names if that’s not what you’re going for? It’s good to want ALL OF IT.

The idea of the local portal certainly has some merit. I once told a friend how Comcast’s acquisition of NBC put them in good position to compete with ESPN. He didn’t agree but given he watched the majority of Sharks, Warriors, and Giants games on CSN Bay Area, this in total was more than all the ESPN he consumed all year, and by a wide margin. But when it came to digital consumption, he and others both here and in other markets just never really latched onto the various localized digital offerings put forth by traditional media companies. So what went wrong?

To some degree, execution was and is an issue for a lot of these sites. Sometimes it’s the content where a handful of writers have been put into a mixing bowl and haven’t blended well together to form a cohesive voice that fans identify with. Some of these local sites (looking at you radio) just look like crap. Even the better ones largely scream “Hello 45-65 males, unable to find the real good shit tucked away on other corners of the web. We’re here, you’ve found us and we’ll always be here for your convenience serving a mediocre product similar to your local KFC.”

But maybe the concept itself was flawed. Our own Joe Lucia offered this insight:

“Because of the internet and how fans can follow teams from anywhere in the country, regional identification isn’t nearly as strong as it was. As a Braves fan, I don’t want to wade through Falcons and Hawks coverage. I don’t want to dig through articles about the dozen or so Chicago-area teams for a tidbit about Northwestern (ED note: Joe did not go to Northwestern. We still don’t know why he roots for them). Maybe for some fans, they’re totally immersed in their city’s teams, and that’s awesome. But I’m meeting more and more fans who cheer for teams in various cities, and don’t even bat an eye at it anymore”

“Would I rather go to a top blog that’s 100% dedicated to a single team or to a regional site where I’m getting some original content mixed with wire stories and I’m not sure what I’m going to get?”

But it’s more than just the concept and execution of these sites and the rise of high quality team specific sites.

Bleacher Report and other newsletter services from traditional companies can curate or automate delivery of team specific links so you don’t have to go find them. Bleacher Report and ESPN also offer ridiculously easy processes to customize your favorite teams as well (screenshots below). 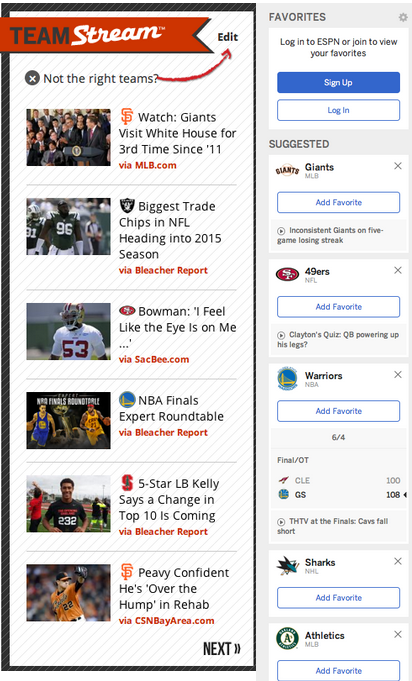 Using geo targeting, they’re able to take a good stab at what teams you or I like, thus potentially removing the need for a local site for some. I hate the Giants (please join me) so at the very least, I feel compelled to X out those atrocious colors and logo whenever these prompts come up and by then I’m maybe halfway there to customizing my feeds.

The other main thing is that very few people go and find content anymore. Think about it. How many content websites (daily fantasy, etrade, farmersonly.com, and brazzers don’t count) do you daily or 2-3x a week actually type into your browser (or via bookmark or favorite) to go to their homepage? I’m guessing for many non content addicts it’s 3-7 sites. Going to a site regularly almost becomes a habit you can’t break after awhile. Regardles it’s the ultimate compliment you can give to a website. “I’m here again, what you got for me? That sounds fun, I’ll click and give you another page view and will back later today to do this again.”

But portal websites never seem to achieve that on the local level. Instead so many fans are comfortable knowing, “I have 100 friends on Facebook who like the same teams as me. I follow many people on Twitter who like the same team as me. I can draft off of their curation abilities and recommendations rather than wander around the web like a drunk guy waking up in an unknown dark home in the middle of the night looking for a bathroom.”

After a while of seeing links to the same sites, maybe they’ll take the simple step of liking and following a particular site directly. This social distribution has been amazing at the local level and can be somewhat of a kingmaker for local content.

I think if you took a localized lay of the land at this point, the lion’s share of traffic covering a specific team in most cases would be team specific blogs and not the local newspaper, regional channel, radio station, etc. In the case of my teams, I’m pretty confident SBN’s Athletics Nation outperforms all other team sections covering the A’s on various websites. For Ohio State, Eleven Warriors reaches half a million readers a month per Quantcast and has lapped the field of all the subscription sites, something I didn’t even think was feasible given these sites were bringing in reoccurring subscription revenue.

The reality of all of this is the big boys even with their money and television and radio rights, just can’t hang with the cool kids and smart kids who have built localized audiences post by post and tweet by tweet with a specific audience in mind while the big boys flailed around trying to serve an overly broad audience. The emerging reality is that if they want to be culturally relevant locally on the web, they’re going to have to buy their way in as we’ve seen with Time buying Fansided and rumors of Comcast kicking the tires on SBN’s parent company, Vox (Just do it already).

Time will tell if mainstream media will take this plunge in earnest but for now, I’m somewhat fond of the status quo. We have some team sites in our network that do quite well and that give us ambitious, smart, and savvy site owners and editors the ability to try to build out their own mini empires while Goliath runs vanilla AP stories and auto-plays stale video from last night’s wrap-up show. As long as that’s the case, the balance of influence between corporate behemoths and independent fan voices will continue to tilt towards the latter and more focused and more authentic content and site experiences. It may unfortunately come at the cost of some mainstream jobs as we’ve seen, but there is still a sea of opportunity still out there and to me, that’s pretty cool.