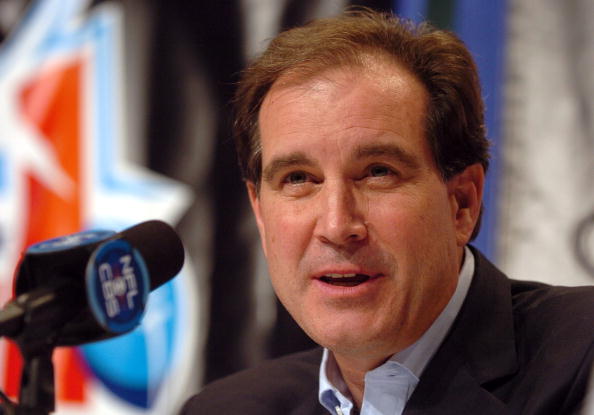 In 1986, a 26-year-old Jim Nantz sat down and readied for one of the biggest moments of his career. Nantz, only in his second year with CBS, was getting his first crack at a burgeoning new sports dynamo in the NCAA Tournament. The game was expected to be a blowout, featuring the powerhouse Duke Blue Devils and upstart Old Dominion Monarchs. For the evening, Nantz was paired with Bill Raftery.

Duke won 89-61 but ultimately, the larger story was behind the press table. Nantz began his run of 30 consecutive NCAA March Madness tournaments which stretches to the present day. In 2015, Nantz will be reunited with Raftery behind the mic, not having called any games together since that first year.

“He truly was a huge help to me that first year, 1986,” Nantz said. “… We would work together a couple more years in the studio during the tournament but the friendship never disappeared. We played golf together, we stayed in touch. I’m just happy he is getting the opportunity to call a game on television. He’s done a lot of radio broadcasts of the Final Four and he probably thinks ‘Well I’ve called a Final Four,’ but people love him. He really broadcasts the game with a smile on his face. You can hear his smile I like to say and it is just neat to see it all come full circle.”

For any college basketball fan, Raftery has become a staple for his enthusiasm during games and trademark “ONIONS!” call after a huge shot. His style is unmistakable, making for one of the better broadcasters of this generation. Raftery allows you to believe you know him through the television, the man you could sit at a bar with and talk shop. It’s a rare gift.

Raftery enters the tourney unsure how to compare his radio experience on the final weekend to going on television with Nantz, and partner Grant Hill, who is also calling his first Final Four.

“I can’t answer that until the Friday of the tournament (leading up to Final Four), because I’ve always done radio,” Raftery said. “Going in there is going to be different, watching practice. I’m sure on Saturday, the excitement and euphoria, the anticipation will set in. Once the ball goes up, it will all be fine. It’s the lead-up that gets the senses moving.”

Since 2000, Raftery had been working the tournament for CBS with partner Verne Lundquist. Lundquist, who has called every tournament since CBS acquired the rights in 1982, will have a new partner in Jim Spanarkel this year while Raftery goes to the top team. Despite losing a familiar face next to him, Lundquist is confident his new partnership will be terrific while sharing joy for his old one.

“I am thrilled for him, thrilled for him,” Lundquist said. “I don’t know anybody in college basketball who doesn’t love the man. He’s admired, he’s adored, and he is great as a broadcaster. He brings uniqueness to his craft that is enviable. To have waited this long, probably enhances the pleasure for him. He is anything but self-aggrandizing and that is not true of all people who do this for a living. He’s not going to brag about his new role, but I have had dinner with him a couple of times and I know how thrilled he is, and he should be.”

This is the fifth year that CBS Sports and Turner Sports have partnered on the broadcasting of March Madness, giving every game full exposure. All of the contests can be seen on either CBS, TruTV, TNT or TBS.

Raftery and Nantz will be joined by Hill, giving them the former player dynamic which CBS has used over the past decade with Clark Kellogg and Greg Anthony. However, with Kellogg in the studio and Anthony suspended indefinitely following his solicitation of a prostitute in January, Hill is getting a promotion. After broadcasting his first NCAA Tournament in 2014 as a studio analyst, Hill gets the ultimate call.

“The ties that my first partner is now my partner 30 seasons later,” Nantz said. “That Grant Hill was in the first championship game that I called in 1991, it is a very special mix. I’ve been around a long time. I can tell when something is going to be good. This is going to be great.”