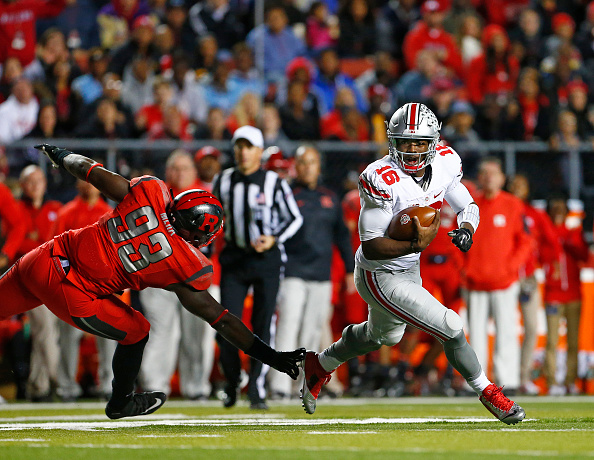 The top ranked Ohio State Buckeyes traveled as far east for a conference game as they have this weekend as they made the 510 mile journey to Piscataway to face Rutgers.  While the historic visit was much hyped, the game turned into a rout as the Buckeyes trounced the Scarlet Knights 49-7 in a game that was never in doubt from the opening whistle.

In many ways, it was symbolic of Rutgers’ brief tenure in the Big Ten – little competition on the field, but plenty of attention (and generated revenue) off the field.

In spite of a predicted blowout coming to fruition, Rutgers-Ohio State was played in primetime within a stone’s throw of the largest media market in the country. (For now, let’s continue with the Big Ten’s theory that the Empire State Building is catching hold of Scarlet Knights and Big Ten fever.)  And to this point, that’s Rutgers’ biggest contribution to the Big Ten – television eyeballs.

Well, scratch that.  It’s not even necessarily television eyeballs.  It’s just televisions… whether they’re actually being watched or not.

The biggest victories Rutgers and Maryland have provided the Big Ten since east coast expansion have not been in football or basketball, but in television revenue.  BTN has upped their subscriber base and their advertising revenue thanks to getting clearance on cable systems back east.  Keep in mind that just one carriage agreement in New York is going to net about $50 million annually to the conference.

Even their Big Ten compatriots are aware of the real reasons why Rutgers and Maryland are in the conference.  Just check out this Urban Meyer quote via the New York Times:

The reasoning has a lot to do with geography. Ohio State Coach Urban Meyer, who will lead his top-ranked Buckeyes into Piscataway on Saturday night for a nationally televised game, said that New Jersey had “as good high school football as anywhere in the country, and obviously a ridiculous amount of TV sets.”

Those TV sets may help the Big Ten negotiate a blockbuster new television deal in the next year, and they have already helped the Big Ten Network, according to its president, Mark Silverman. The network, which is now in more than 60 million homes nationally, added eight million subscribers in the New York metropolitan area in the past year, a period that coincided with Rutgers’s first year as an associate member of the Big Ten. It also experienced a 20 percent year-over-year rise in advertising revenue — more than twice what would have been expected without conference growth.

Just how much will those “ridiculous amount of TV sets” help the Big Ten and its member institutions?  We all know Big Ten TV rights are one of the last fishes out there to catch in the sports media landscape with most of the other major properties well locked up into the next decade.  With rights fees still exponentially increasing across sports, and with an expanded Big Ten looking to cash in thanks to their eastward expansion into more homes and more markets, the conference is setting up for a huge payday.

Just how huge?  Payouts to each school could well exceed $40 million dollars:

But Rutgers will fully vest as a Big Ten member in 2022, and will then start receiving a conference and N.C.A.A. payout estimated at $35.5 million a year. But that figure, too, is conservative: The Big Ten is set to sign a new deal for national broadcast rights next year, which, combined with continued growth at the Big Ten Network, is expected to establish annual payouts exceeding $40 million for each program.

Barchi, echoing a criticism he himself has made, said, “Right now, at Rutgers, athletics is siphoning dollars away from the academic mission.” He added: “That is why we have a plan to eradicate that imbalance. I am fully convinced that if we stay the course, that is what’s going to happen.”

Traditionalists might still cringe at the thought of Ohio State visiting Rutgers or Michigan visiting Maryland.  With the conference superiority debate at such a premium these days, the two east coast schools aren’t exactly helping the Big Ten’s reputation and winning any extra bragging rights.  One school suspended their coach while the other was fired just this season.  It’s going to take an awful lot for longtime Big Ten fans to ever get excited about the on-field prospects of the two schools and what they might contribute to the conference.

But this is what makes Jim Delany the mad genius that he is – the addition of Rutgers and Maryland was never about increasing the Big Ten’s New Year’s Day bowl victories or odds at a national championship.  They were about the increase in dollars that would come by expanding east.  At least in that category, Rutgers and Maryland have provided one victory that is worth its weight in gold.