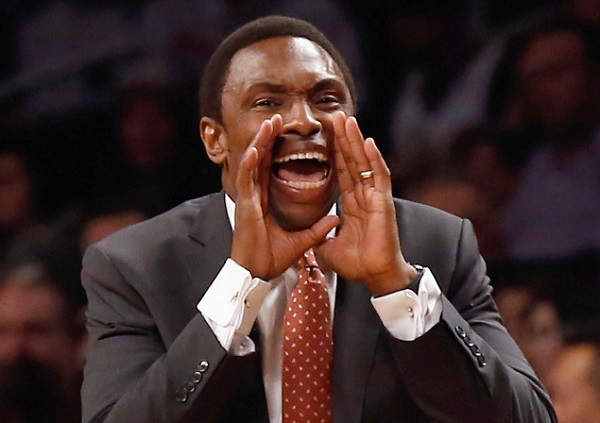 In one of the more curious moves in college basketball’s annual coaching shuffle, Alabama has hired ESPN NBA analyst Avery Johnson for its head coaching position.

The news was initially reported by the network’s Jeff Goodman. Johnson had appeared regularly on the network’s programming, including NBA Coast 2 Coast, NBA Tonight and SportsCenter.

What makes this one a head-scratcher is that the Crimson Tide was aiming high after firing Anthony Grant in mid-March. Reports had Alabama athletic director Bill Battle heavily pursuing Wichita State coach Gregg Marshall, armed with an offer that would have paid more than $3 million per year. But the Shockers appear to have matched that offer, convincing Marshall to stick around with a seven-year deal worth $3.3 million a season.

Alabama was then reportedly interested in Minnesota coach Richard Pitino, but quickly took himself out of consideration, saying he wanted to stay in Minneapolis.

But if you listen to pundits such as Paul Finebaum, maybe this worked out well for the Tide. Despite his last name, Pitino likely wouldn’t have been a needle-moving hire and Alabama needed to make a splash. We have no idea how successful a college coach Johnson may be, but this certainly was a headline-grabbing move — even if it also raised eyebrows and turned heads askew.

“At this point Alabama needed to take a chance,” Finebaum told AL.com’s Matt Zenitz, “and I give Battle credit for taking his time, not rushing into it just to have a hire, and getting someone that I think puts Alabama in a position to move forward and progress.”

Really? Because “rushing into a hire” is exactly what this looks like. Johnson hasn’t coached since the Brooklyn Nets fired him at the end of 2012. And though he’s coached seven seasons in the NBA, Johnson has never coached in college, coaching in the pros as an assistant with the Dallas Mavericks under Don Nelson immediately after his playing days were finished.

However, maybe Johnson has been scouting the SEC since his son, Avery Johnson Jr., is a freshman at Texas A&M. Perhaps he brought something more to an interview with Battle than name recognition and professional pedigree. But as a young, energetic coach with 16 years of NBA experience as a player, Johnson might be able to make a quick impression on his players and recruiting. “Hey, I know that guy from TV” is a solid entry point into prospective recruits’ awareness.

Still, when Tennessee hires Rick Barnes and Mississippi State gets Ben Howland, Alabama hiring Johnson looks kind of desperate. Obviously, it’s up to him to show that he’s not just a flashy name.