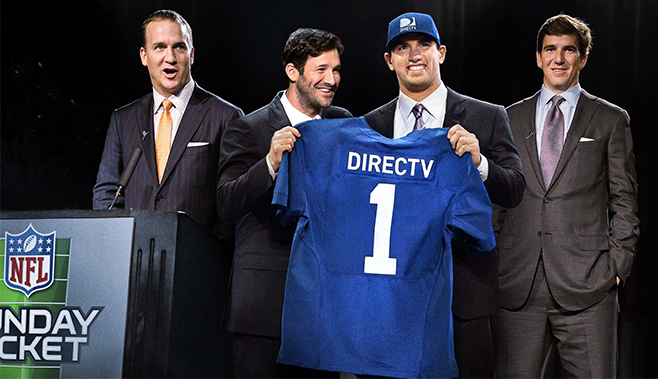 Since 2010, DirecTV has been slowly expanding the reach of its NFL Sunday Ticket to those without a subscription. It first allowed those in certain cities in apartments and condos who couldn’t get DirecTV to subscribe. Then it started a program in ten colleges and universities for students to access Sunday Ticket.

Now that AT&T’s purchase of DirecTV has been approved by the Feds, the wireless carrier is working on bringing the out-of-market pay package to more Americans and a satellite TV subscription is not required.

AT&T has announced it is expanding the apartment and condo program to more cities plus a special program for college students:

The exclusive, live streaming version of the popular NFL SUNDAY TICKET subscription service is available to consumers living in an apartment, condominium or townhome who are not now receiving DIRECTV service.  NFLSUNDAYTICKET.TV is also available to consumers who were not able to install a DIRECTV dish at their home due to an obstruction or other restriction. Active students at four-year universities nationwide can buy NFLSUNDAYTICKET.TV U at an exclusive student price.

For people living in apartment buildings and condominiums, prices start at $49.99 a month ($199 total) for the season to watch on mobiles, tablets and computers; $64.99 a month ($259 total) to be able to watch on TV’s through Xbox, Playstation, and Roku set tops; and then the Max package at $89.99 a month ($359) which allows for access on any device.

Students at over 300 institutions will be able to subscribe for $99 or payments spread out at $24.99 over four months and this will bring features from the regular Max package to students.

Of course, the Max package might be pricey to some consumers, but for the ability to watch Sunday Ticket on mobile devices at $49.99/month might be enough to attract fans who hadn’t been able or want to get DirecTV.

The satellite provider also posted a video on the new packages:

For more information on eligibility requirements, you can go to the Sunday Ticket web page.