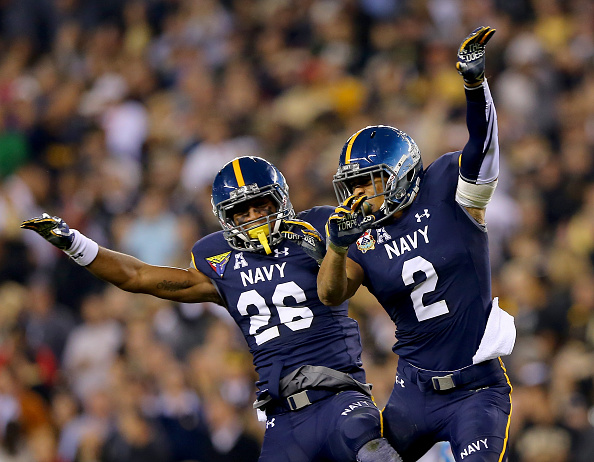 This century isn’t exactly old, but it has featured 16 Army-Navy Game broadcasts.

This past Saturday’s CBS telecast scored the highest rating of the century.

The 5.1 overnight number is the highest rating for this game since 1996. Surprised? You shouldn’t be.

A close game; Army putting up a very good fight; and Navy receiving a surprisingly stiff challenge as a (roughly) three-touchdown favorite all fed the big number. Yet, this rating was the product of so much more than the close game itself. Instructively, it shattered one particular present-day belief about the ratings-based viability of this event.

A few components of this college football season made Army-Navy more visible. They also spiced the latest edition of this venerable rivalry with the drama and poignancy which create compelling television.

For one thing, Navy enjoyed a higher season-long profile in 2015, compared to previous years. Navy was a factor in the race for the Group of Five’s New Year’s Six bowl bid all the way through the season schedule. The Midshipmen’s move to the American Athletic Conference — marking the first time the Naval Academy played football under the banner of a conference — injected the team into the bloodstreams of multiple national conversations. Would Navy win the AAC West? Would Navy play Temple for the AAC championship? Would Navy play in the Peach or Fiesta Bowl?

These issues were blogged about at The Student Section and various other outlets. The Army-Navy Game didn’t merely arrive in the middle of December as a pleasant bit of entertainment between Conference Championship Saturday (Dec. 5) and the start of the bowl season (Saturday, Dec. 19). This game entered a lot of discussions in November for various reasons.

The Annapolis signal caller is the most decorated Navy quarterback since a man named Roger Staubach. Reynolds made constant headlines this season for all of his NCAA scoring and touchdown records. Saturday night, it was revealed that Reynolds finished fifth in the Heisman Trophy voting, something which only reaffirmed the idea that he should have been invited to the New York ceremony. He wasn’t, leading many to suggest that Heisman invitation policies should be amended.

This drumbeat of protest — that Reynolds should have gained an invitation to the Downtown Athletic Club — existed throughout the week leading up to the Army-Navy kickoff. Plenty of people wanted to see Reynolds’s last Army-Navy Game and his next-to-last college game. The depth and breadth of admiration college football fans have for an accomplished service-academy quarterback certainly gave a boost to this game’s national profile.

Army-Navy, as you can see, became a conversational centerpiece for many reasons that didn’t exist (or didn’t exist to the same degree) in previous years.

As a result of all this, one idea about the current drawing power of Army-Navy was smashed.

Navy entered Saturday’s game as a hefty favorite, and as the owner of a 13-game winning streak in the series. Army’s last win over Navy came in 2001. When a rivalry is this lopsided, it’s very easy for a lot of fans to tune out an event instead of giving it a chance. However, the big number for this game would suggest that this is a neutral issue at worst, and that quite possibly, Army’s bid to stop the streak added even more intrigue to the CBS broadcast.

Army-Navy was a ratings success for all the reasons you’d expect; for added reasons which entered the picture this season; and for a few reasons which are counterintuitive.

That’s how you get a very high overnight number for a game with no College Football Playoff implications.