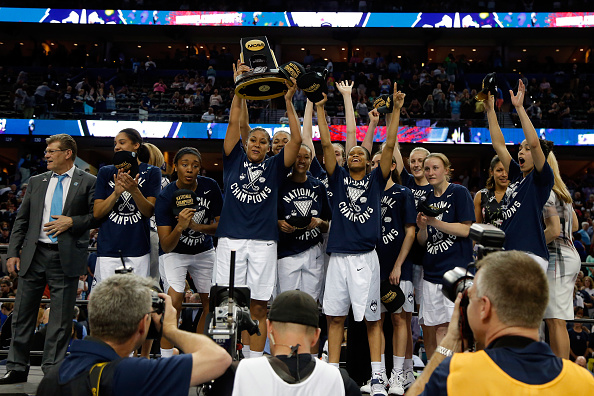 The 2015 NCAA Tournament was a ratings monster for CBS Sports and Turner Sports.  Nearly every round of the tournament saw its best ratings in decades.  And even though we didn’t get to see Kentucky’s attempt at a perfect 40-0 season come to fruition, the Wisconsin-Duke title game still drew massive numbers.  The Blue Devils’ win was the most watched championship game in 18 years and the tourney overall was the most watched in 22 years.

But it was a different story for the women’s tournament… at least for the championship game.

The sport’s preeminent power, UConn, was there once again.  The Huskies faced Notre Dame for the second consecutive year as the Irish were only making their fourth title game appearance in the last five years.  Unfortunately for Notre Dame, they’ve now lost all four.  UConn won their fifth title in seven years with a 63-53 victory.

Nevertheless, viewership was well down from last year and the lowest since 2009 for the title game according to Sports Media Watch.  The 3.1 million viewers for the UConn-ND rematch was down 28% from last year and also ranks as the third lowest total for the championship game in 20 years on ESPN.  It wasn’t all bad for the women’s tournament ratings-wise as the semifinals were slightly up from last year – 4% and 12% respectively.

Nevertheless, it’s worth asking at this point though whether or not the UConn dynasty is drawing viewers in or causing them to turn away.

While we often think that dynasties are great for sports and viewership numbers (the prevailing theory that people want to see greatness) that’s not always the case.  Although Tiger Woods took golf to incredible heights, Jimmie Johnson’s sustained run of success saw NASCAR ratings fall off a cliff.  For as much as Jordan’s Bulls were always must-see-TV and a cultural phenomenon, Duncan’s Spurs have always been plagued by a lack of national popularity.

The viewership data tells a story that UConn might be swinging more towards the glass-half-empty dynasty theory.  Three of the five lowest rated title games have involved the Huskies in the last six years according to SMW’s data – 2015, 2013, and 2009 respectively.  On the flip side, the early days of the UConn dynasty brought big ratings to ESPN.  The 2002 (UConn-Oklahoma) and 2004 (UConn-Tennessee) championship games were the most watched of the last 20 years.

Could we be experiencing a case of UConn fatigue?  The 2014 championship game is a bit of an outlier as it was in the top half of title games on ESPN, but that matchup featured the special attraction of both UConn and Notre Dame being undefeated.  But aside from that game, UConn’s sustained success hasn’t been enough to really break through.  If you’re not a UConn fan, there’s only so many times you can watch Geno Auriemma cut down the nets.

UConn just might be too dominant for the sport’s own good at this point.  If there’s no drama or intrigue regarding the outcome of the championship, then how are casual fans going to be drawn in?  The Huskies’ march to the Final Four this year included victories of 56 points, 36 points, 51 points, and 21 points.  That’s 1992 Dream Team numbers.  UConn is 78-1 the last two seasons.  78-1!

It is a bit of a Catch-22 situation.  Without UConn in the title game, perhaps casual fans aren’t reached because the name recognition wouldn’t be as strong.  (Unless there’s a star player like Brittany Griner, of course.)  But the recent numbers show that fans might be ready to at least embrace some challengers to the throne.  UConn’s dynasty hasn’t necessarily been bad for women’s college basketball, but there’s no doubt it would be great for the sport to see some more legitimate challengers arise.