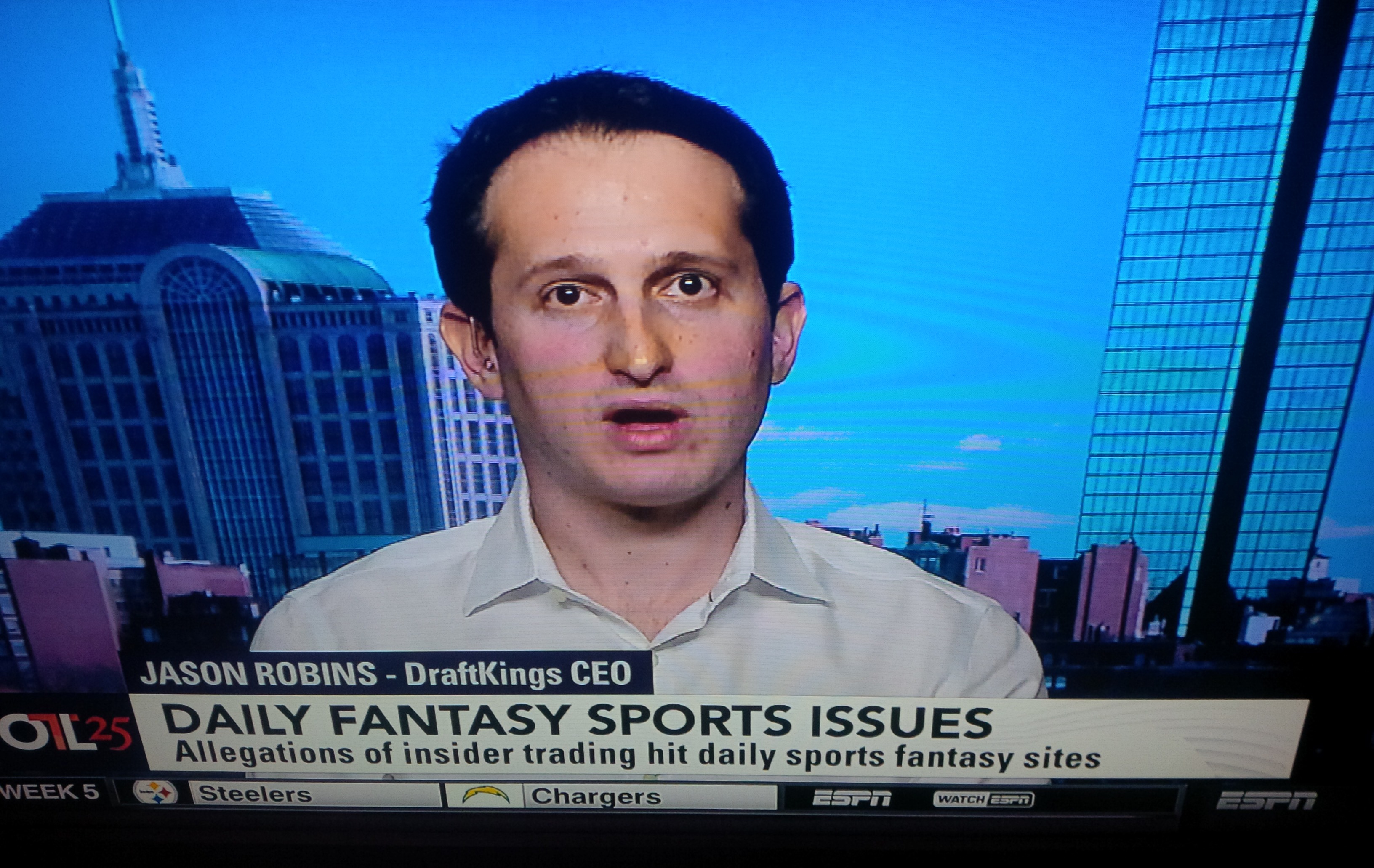 The questions about daily fantasy sites such as DraftKings and FanDuel continue to grow in the wake of this week’s data leak and insider trading allegations, particularly with the New York attorney general’s office beginning an inquiry into those allegations Tuesday, ESPN airing an Outside The Lines investigation into daily fantasy Tuesday, ESPN no longer airing daily-fantasy-sponsored segments, and DraftKings pulling its ads from ESPN. However, while both sites are changing their policies (including announcing bans on employees playing daily fantasy elsewhere, which was at the core of the insider trading allegations) and announcing an independent review of those policies, DraftKings CEO Jason Robins was largely defensive in an interview with Bob Ley on Outside The Lines Wednesday. Ley opened the interview by asking Robins “What have the past 36 hours meant not just to your company, but to the daily fantasy sports industry?” and Robins responded with comments on how DraftKings is moving towards greater transparency and is now open to the idea of governmental regulation but also comments on the “bad reporting” he feels started all this.

“It’s been a whirlwind the last 36 hours,” Robins said. “I think the two most important things here is one, that this is a very real and important issue, and we are committed to having an open and transparent environment where we can have absolute trust from the people playing the game that it is fair. Secondly, the particular incident that sparked this discussion, and this is not in any way to take away from the importance of this discussion, but this particular incident was based on a complete misrepresentation. Bad reporting, frankly. We have finished our internal investigation, we’ve also hired an independent law firm to conduct their own investigation, and what we found is that there’s absolutely no evidence of unethical wrongdoing. The employee made a mistake, he posted data he shouldn’t have, but after lineups had already locked on the competitor’s site, FanDuel, he was playing on, and we have records that prove that. So nothing here happened that damages the integrity of the game. But that doesn’t mean that the commitment that we and all the companies in our industry need to make isn’t real. It absolutely is.”

That strong defensiveness of the employee in question, Ethan Haskell, is in line with what Robins said in another segment on Fox News Wednesday (transcription via Legal Sports Report‘s Dustin Gouker):

First, I want to make it clear to everyone that we are completely committed to creating an open and transparent environment, Having the trust of our customers that the game is fair is everything to us. We have done everything I think to investigate this incident and have very clearly found through evidence that we pulled, records of when data was sent to this employee that there was absolutely no wrongdoing here.

It was a little disappointing the reports that come out did not account for those facts and unfortunately dragged this individual’s name through the mud. He’s a good kid, his name is Ethan he works really hard and I find it very disappointing in order to have a very important discussion that we are very open to having and very committed to having about how we an do a better job creating a trusted and open environment for everyone, it’s just unfortunate for me that somebody who was innocent had to be smeared in order to have that discussion.

This isn’t the first time DraftKings has bashed media coverage of this story, as they also did that in a statement issued to Fortune‘s Daniel Roberts Monday:

There has been some confusion regarding a recent piece of data that was inadvertently posted on DraftKings’ blog containing information about players and fantasy games. Some reports are mischaracterizing the situation and implying that there was wrongdoing. We want to set the record straight. For the last several days, DraftKings has been conducting a thorough investigation, including examining records of internal communications and access to our database, interviewing our employees, and sharing information regarding the incident with FanDuel. The evidence clearly shows that the employee in question did not receive the data on player utilization until 1:40 p.m. ET on Sunday, September 27. Lineups on FanDuel locked at 1:00 p.m. that day, at which point this employee (along with every other person playing in a FanDuel contest) could no longer edit his player selections. This clearly demonstrates that this employee could not possibly have used the information in question to make decisions about his FanDuel lineup. Again, there is no evidence that any information was used to create an unfair advantage, and any insinuations to the contrary are factually incorrect.

This defense isn’t going over well with everyone, though. In particular, Legal Sports Report noted on Twitter that while Haskell accessed that data after FanDuel lineups locked, he got it (and published it on DraftKings’ blog) before the DraftKings lineups were fully locked. He couldn’t have played in a DraftKings contest himself, but that information could have made a big difference for others.

Haskell had access before the DK MM closed (but AFTER FanDuel contest close). That's a fact and that's the problem https://t.co/kgCpuYcizY

Not saying Ethan did this. But fact that he was in position where he could have points to lax fraud controls at DK. https://t.co/3bIP28rxJH

Robins admitted to Ley Wednesday that this kind of information on percentages who own particular players could provide a significant advantage for those who have it:

“Oh, of course. Any information like that could give people an advantage. It’s not going to be enough to ensure absolute victory, but if it’s information that others don’t have and it pertains to the game, then absolutely.”

Another interesting element of the Outside The Lines interview was Robins saying he doesn’t know how many DraftKings employees play on FanDuel and how much money they’ve won, notable considering that FanDuel was able to come up with an estimate (under $10 million) in a short timeframe Tuesday.

Beyond that, towards the end of the interview, Robins said he’s “open to” government regulation of daily fantasy, which, as Chris Grove points out, is a major shift. Ley asked “Do you believe regulation is inevitable for your industry?” and Robins replied “You know, I don’t know if it’s inevitable, but if that’s the decision the government makes, we’re open to that. Anything that will help provide an environment that people feel comfortable and safe in, I’m happy to partake in. Right now, I think all we can do is continue to try to put the best possible policies and procedures in place. Whether or not there’s official regulation, that’s what we’re going to try to do. If the government decides regulation is the best way of ensuring that we’re doing that, we’ll accept that and we’ll do every bit of our best to comply with that.”

We’ll see how the next days and weeks play out in terms of investigations and regulation, but it seems like a reasonable bet that the whirlwind for daily fantasy has only just begun.