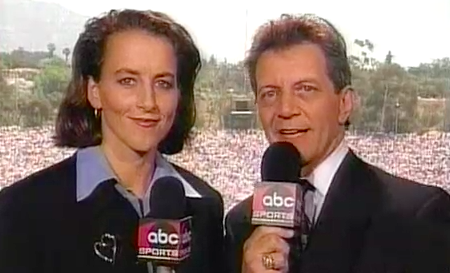 It’s the most famous moment in the history of American soccer.  Brandi Chastain’s successfully converted penalty kick to win the 1999 Women’s World Cup for the US Women’s National Team.  Almost 18 million people watched that game on ABC, which is still one of the biggest soccer audiences in American history and the most watched Women’s World Cup game of all-time by far.

At the mic for ABC Sports was JP Dellacamera, or as he was introduced by Robin Roberts in the pregame, John Paul Dellacamera.

Dellacamera, now 63, was the voice for soccer on American television at the turn of the century calling World Cups, Olympics, and Champions League games.  But in an ironic twist of fate, the man who called that most iconic moment in American soccer history has largely been relegated to the sidelines during the great American soccer boom.

Dellacamera and US Soccer will finally come full circle in 2015, though.  After working the 2003 and 2007 Women’s World Cup Finals on television and the Men’s World Cup for ESPN Radio from 2010-2014, Fox Sports announced Monday that Dellacamera would call the 2015 Women’s World Cup Final alongside Cat Whitehill and Tony DiCicco – the same position he was in 16 years ago.  The trio led by Dellacamera has been Fox’s de facto lead announce team for the Women’s World Cup, calling every USWNT game of the tournament.  They’ll also call the USA-Germany semifinal while Jenn Hildreth and Kyndra de St. Aubin will call the Japan-England semifinal.

First ESPN tried converting announcers from other sports into soccer voices.  Dave O’Brien’s run at the 2006 World Cup was a failed experiment widely criticized, and led ESPN to go to the exact opposite end of the soccer announcing spectrum.

For the next two World Cup cycles, American soccer experienced their own version of the British Invasion.  British heavyweight commentators such as Ian Darke, Martin Tyler, Andy Gray, Jon Champion, Stewart Robson, and Steve McManaman became ESPN’s choices for lead announcers.  The moves were met with critical acclaim and Darke has stayed on as ESPN’s lead voice after establishing quite the connection with the stateside audience.

When Fox took over World Cup rights, they turned back the clock to 2006 and tried to convert Gus Johnson into their lead soccer voice, hoping to bring back the American voice.  Like O’Brien in 2006, the experiment did not succeed.  And Johnson’s tenure may have been an even bigger failure as Gus didn’t even make it past a year in the soccer booth to reach the 2015 World Cup.

Say what you want about Fox’s coverage, but they have stayed true to their commitment to feature American soccer announcers for their World Cup coverage.  All seven of the announcers who will call the semifinals, final, and third-place game (Justin Kutcher and Aly Wagner) are Americans.  And that list doesn’t even include Fox’s lead MLS voice John Strong and Danielle Slaton, who did admirable work throughout the tournament as well.  In fact, it’s something of a surprise to not see Strong’s name among the Fox announcers for the home stretch of the 2015 World Cup as he could very well be the face of the network’s soccer coverage in the long-term.

But for 2015, it’s appropriate that Dellacamera should lead the renaissance of the American soccer announcer and call the World Cup Final.  It’s never been quite right that someone who has been such a great servant of American soccer over the years has been left on the margins while the sport reached the mainstream.  If anyone deserves the opportunity, he does.  Because even as televised soccer in America went every which way in the last 16 years, JP Dellacamera was always there for American soccer.  It’s just taken a while for the sport to come back to him.