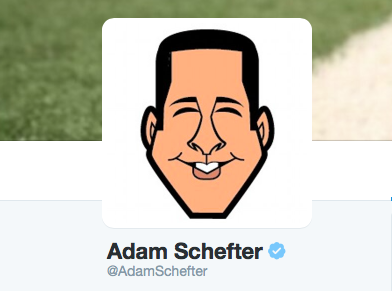 NFL insiders have reproduced at an alarming rate over the past few years, seemingly reproducing by budding like a sponge.  Major sports networks and media outlets have multiple people working for them whose sole job is to report every single drop of NFL news that is in existence.  Newspapers and blogs are trying to get in on the action.  Even people who have no business reporting on the NFL are trying to get their name out there.  (Did you hear about the college football recruiting guy who broke the news that the Saints were open to trading Drew Brees?  Didn’t think so.)

More demand from fans for information leads to more media resources dedicated to fulfilling said demand, which leads to a deluge of football news on a 24/7/365 basis, no matter how big or small, no matter the source.

But with all this increased competition and flooding of the marketplace, there’s still one NFL insider who reigns supreme above the rest – ESPN’s Adam Schefter.  The opening day of free agency is the annual Hunger Games for NFL insiders and Schefter is always the winner.  2015 was no different.

It started with Schefter’s announcement about an ESPN special at 3 PM ET when the green flag was dropped.

Wall-to-wall free agency coverage on ESPN from 3-6. All hands on deck…

Schefter then produced a tour de force performance of insiderdom, even while he was simulatenously appearing on ESPN television.

He also tweeted information about the following players, either sharing deals that were done or visits that were scheduled or forwarding reports from others.

The total breakdown in numbers in just over 8 hours of reporting on the first day of free agency:

The most amazing thing about Schefter is that this seems like a normal day for him whereas the other 6 billion people on planet earth would be floored over all the activity and breaking news on his Twitter page.  Amazingly enough, these numbers are down from the 62 players Schefter reported on for the first day of free agency last year, although the weird timing for the opening of free agency this year probably had something to do with that.

After all that, Schefter finally allowed himself to breathe in the late evening hours after a full day of reporting news.

Well, that was quite the New Year's Day….

Naturally, he’s already back at it this morning breaking news on DeAngelo Williams, Brandon Browner, and Clint Boling.  I just hope he has his phone charger with him in Bristol.