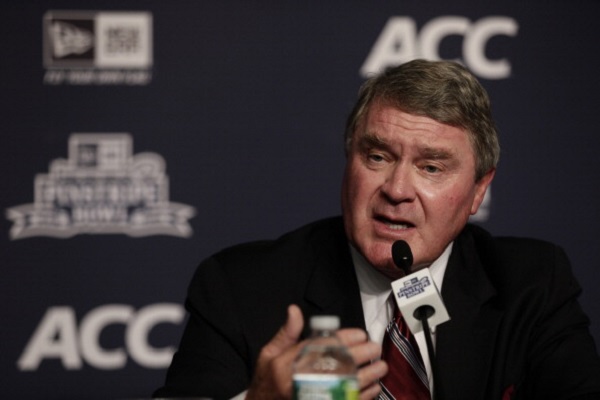 Despite the success that the Big Ten Network and SEC Network have both yielded for their respective conferences, the ACC is still exploring whether or not creating its own television network is in its best interests.

According to the Associated Press, the conference and ESPN are in ongoing talks to figure out what makes the most financial sense for both sides. Is it more profitable for the ACC to create its own network, likely tied to ESPN, or would maintaining the status quo work out best? The conference’s current rights deal with ESPN runs through the 2026-27 season, with each school receiving $20 million annually. But compare that to the $455 million the SEC split among its 14 members after creating its own network with ESPN.

ACC commissioner John Swofford insists there’s no timetable for making a decision on starting up its own network, though the topic has been an increasingly pertinent one for the past few years and speculation is that the earliest a network could launch is 2017. Coaches and athletic directors have been vocal about the exposure and revenue that a cable channel could provide to the conference.

“I think every league’s going to have it,” North Carolina football coach Larry Fedora told the AP. “The ones that don’t right now, they’re going to have it eventually. So you might as well get in there and get going.”

But as you might expect, athletic directors who have to keep an eye on their schools’ financial bottom lines are in favor of a more cautious approach and endorse Swofford’s philosophy.

Recent expansion by the ACC appears to work toward a broader base of subscribers that could help a fledgling network. The addition of Pitt brings in the western Pennsylvania market, while Syracuse covers New York and Louisville attracts the Kentucky market. Notre Dame is also a national brand that helps the conference’s profile and recognition throughout a broader segment of the country.

The difficulties that the Pac-12 Network has had in finding distribution and teaming up with a partner such as the Big Ten has with Fox and the SEC with ESPN is surely giving the ACC some pause as it tries to determine which direction to pursue. Additionally, the prospects of creating any network carry some uncertainty as an increasing number of consumers cut the cord with cable and satellite providers in favor of viewing content through streaming and mobile outlets.