This year has been a roller-coaster ride in sports media with a rare number of big name personalities either on the move already or faced with speculation about their future.  More specifically, ESPN is faced with the huge task of deciding which of their big name on-air talent they want to re-sign to new contracts and which they’re resigned to seeing exit Bristol.  With ESPN cutting costs left and right, the decisions are more important and pressure-packed than ever.

Already, we know that two of ESPN’s most notable commentators will be working elsewhere soon.  ESPN President John Skipper announced earlier this year that the network would not renew Bill Simmons’ contract after years of conflict between the Sports Guy and upper management.  Just yesterday, it was reported that ESPN and Keith Olbermann would also be parting ways.  While ESPN called it a “business decision” there’s a lot more beneath the surface.

Could Colin Cowherd be next with his contract also known to be up soon?

We pulled together our staff to predict where these three lighting rods of sports media – Simmons, Olbermann, and Cowherd – will eventually land. 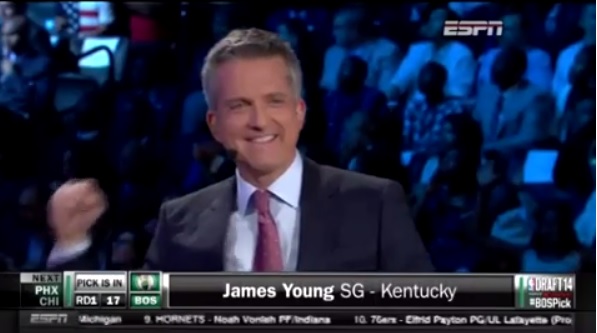 HBO has been reportedly going after Simmons‎, which elevates them above many of the other contenders so far (we can speculate about how others might want Simmons, but we know HBO actually wants him). He’s given his own regular talk showish thing, but more like a video podcast, which will play big on HBO Go. He also gets involved with their sports docs. On the side, he recreates Grantland 2.0 with venture capital backing: he hires smart people and smart people to oversee them, but his main day-to-day involvement is columns and podcasts.

I’m thinking outside the box here. Vice has a lot of money. It has solid infrastructure for an online site for Simmons. It’s also going to be taking over A&E’s H2 channel airing documentaries which is a perfect vehicle for Simmons. The interesting thing is that Vice has sold ads two years in advance for H2. No one does that. It means that Vice has attracted advertisers that buyers crave and Simmons might be perfect for it. In addition, Vice News will produce a nightly program for HBO Now and I can see Simmons participating in that venture if he signs with them. Now will Vice be interested in Simmons? That’s the main question. To me this is a good fit, but both sides have to come together.

When we published a list of rankings for landing spots for Simmons earlier this year, I put Turner at the top, leading Turner to put out a disclaimer that I don’t speak for the company on those matters (a personal highlight for me in my tenure with the company). Given how loud the HBO rumors were a few weeks ago and how nothing else has come up at all from the Simmons camp, I’m going to assume he already has a deal in place with HBO and is waiting for the clock to strike midnight on his ESPN contract before showing up in promotional photos with Bryant Gumbel, Bill Maher,  John Oliver and the bloody corpse of Jon Snow. I’ve never understood the draw of Simmons as a television personality, but he would be great behind-the-scenes for HBO — imagine if he got his hands on a Hard Knocks like project for the NBA — and I eventually see him going back into entertainment, maybe as a writer and producer for an Entourage like show about the NFL. Maybe they could even get a big star like The Rock to star in it. Nah, that sounds ridiculous.

This seems like the safest pick to me. Turner is one of two outlets with NBA rights, has a vast web outlet with Bleacher Report, and isn’t taking a bath on other rights fees like we’ve seen reports of other networks doing lately. Simmons to Turner simply makes sense.

It is interesting to note that the BS Report podcasts still are being featured on his Grantland site. Wherever he goes, I don’t think he ever will have the level of reach ESPN gave him with its many platforms. However, the Simmons brand does carry considerable weight, and he will have followers at his ultimate landing spot. Best bet would seem to be Turner and Bleacher Report creating a site for him. The Turner connection would allow him to stay connected with his first love, the NBA.

I’m in complete agreement with Andrew on this one.  HBO makes perfect sense as a television outlet with Simmons attempting to become the sports version of Bill Maher or John Oliver.  (Whether he’d be successful or it’d be Joe Buck Live 2.0 is another debate entirely.)  He could also help reboot HBO’s fledging documentary department.  However, that still leaves his online empire to be addressed.  I have a hard time seeing HBO suddenly creating a mega sports portal to house Simmons and all his sports and Hollywood buddies.  Perhaps they’ll be an investor, but my bet is Simmons going the Glenn Beck model and creating an independent venture where he’ll finally have what he never did at ESPN – complete editorial freedom.