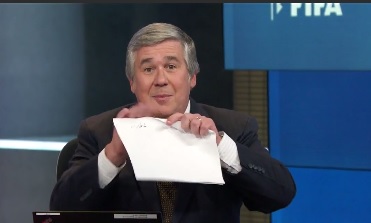 After 35-plus years at ESPN, it was announced on Tuesday that Bob Ley had signed a new contract extension with the company.  At the time, Ley was back in the anchor’s chair conducting live coverage of the ongoing FIFA corruption crisis, this time delivering the news of Sepp Blatter’s shock resignation.

The last week has represented ESPN at its very best – delivering meaningful and relevant live coverage from its collection of soccer analysts and experts from around the globe. The network has owned the Blatter story and flexed its muscles, showing how far the gap is between themselves and their respective cable sports competition when it comes to live breaking news. Ley’s presence is a major reason why ESPN has stayed ahead of the curve, as it has been for the last three decades and more.

AA spoke with Ley after he left Bristol on Tuesday evening about Blatter’s resignation, how ESPN pulled together live coverage on the fly talking with their analysts from all around the world, the separation of church and state in Bristol, and just how much longer he sees himself working at ESPN.

AA: We have to start with the most important thing: why shave the beard?

Bob Ley: The beard was birthed July 13, 2014 in Rio. What happened Matt, was Swiss prosecutors began to show a lot of interest in the beard and I just felt it was prudent that it disappeared for a while.

AA: Once you get the Swiss on the case, you know things are serious… how shocked were you by Blatter’s resignation, especially considering four days ago he’s at the FIFA congress taking the victory lap after his re-election, chanting “Let’s go FIFA, let’s go FIFA” and declaring himself the president of everybody? Now he’s the president of nobody.

Ley: Absolutely shocking. When I heard the press conference was called I figured it was something serious and they would have to address this letter that had been produced by the South African Broadcasting Company from the South African federation with [Jerome] Valcke’s name on it showing that despite what FIFA had said to the contrary Valcke knew $10 million was going to be given over to Jack Warner so they had to address that.

If you want to make the Watergate analogy, maybe Valcke is Haldeman. So they’ve got John Dean and Ehrlichman and now they’ve come for Haldeman. Could the big guy be next with the chopper warming up on the South Lawn?

AA: Take us behind the scenes of how the live coverage unfolded in Bristol once you heard there would be an impromptu FIFA press conference and how you and your producers were able to create such captivating live television with so many different soccer contributors providing analysis and insight on the fly.

Ley: This is the only day I’m in the office this week because I have out of town obligations the next three days. We were going to replay our Sunday program about the renovation of Wrigley Field and we’re sittting there at our group of computers for a low key day when we hear there’s going to be a FIFA press conference. So I said, “I better go down to my office, put on my tie, grab my earpiece and my suit, and go back upstairs.” When they started delaying it, they said get over to Studio X, the SportsCenter studio. Not having a Segway I had to catch a ride because it’s all the way over on the other side of campus. That’s a joke, Matt, [laughs] but it’s actually .4 miles across campus.

AA: Did you pick up something in the ESPN cafeteria and say hi to Mike & Mike on the way over?

Ley: Funny you say that as it’s 6:35 PM as you and I are talking and I haven’t eaten since 5:15 AM this morning. I was about to get lunch when the FIFA hit the fan.

When I got down there the press conference just started and SportsCenter took it on a slight time shift. By the time it’s over it’s clear what had happened. He had resigned and walked off, no questions. I’m on the SportsCenter set with Chris and Jay and we’re breaking it down. I’m told in my ear Shaka was on his way out as he was in the house for ESPN FC. He was fantastic for us last week. Basically we just start recapping it. I grabbed my notes from Friday that just happened to be the one in the newsroom with me at the time.

We moved over to the other set during the commercial break. Next in was Julie [Foudy] who I worked with Saturday in New Jersey. While I’ll this is happening I’ve got the easy job. I’m out there talking international football and politics and Sepp Blatter and scandal but the bookers and producers are calling Steve McManaman in Mallorca, Ian Darke in London who I just had lunch with on Saturday, Jeremy [Schaap] driving up from downstate who’s done tremendous work on Blatter. Then we’ve got Gab Marcotti in Berlin for the Champions League Final and Craig Burley, who was with us in studio last Friday just off his flight over there, and Roger Bennett from Men in Blazers. After you’ve done this a couple times whether you’re on the air or in the control room it’s a very familiar dance – you just want to make sure you get all your facts right and you keep a proper tone.

AA: You list off all those contributors that were brought in to the coverage. For you is this one of those days that represents everything ESPN can be as the self-proclaimed worldwide leader where you can go to Mallorca and Berlin and London to bring in world-renowned former players and commentators and journalists and put all those resources to their best use?

Ley: Once we’re done, and we’re never done because we’re taping things once we’re done live, but once you’re done yes you’re very proud that you were able to put 40 years of love for this sport and the contacts and the knowledge in that time and work on the fly and share that. The US soccer community has grown, but it’s still not very large. But all the people we had on today I would consider a friend. We all know each other and we’ve all had these conversations about FIFA off the air in airports and bars around the world and now we get a chance to put it out there. What you guard against is going too inside football and down into the politics of the federations of FIFA to lose people. You want to keep it as relevant as you can.

I was talking to Jay Harris as I left the office trying to remember the last off-the-field sports story that captivated the world like this. The last two, and maybe I’m missing something as I’m deprived of sustenance on the way home for dinner, would have been Ben Johnson testing positive for doping at the Olympics or Magic Johnson testing positive for HIV. This story with Blatter matters to every country in the world because soccer is the world’s game. If problems were to crop up in MLB, NBA, or the NFL there’d be a lot of people in South Asia that wouldn’t give a rat’s behind. They do about this.

AA: Imagine how big it would be if the feds went after Roger Goodell. Multiply that by 209 FIFA national assocaiations and that’s what you have here. There’s always a recency bias with the story du jour, but I don’t think we in America can really understand the global nature of this story, even though our government is the one leading the charge. But now with the FBI perhaps looking to take this to the top this could be Rome crumbling before our eyes.

Ley: This matters. This matters to Brazil a lot where corruption is a constant political dynamic in their society. This matters in the third world and developing nations where that check from FIFA for their football association meant a great deal. Now, what happened when that money arrived is another story, but that money made a difference and bought Blatter’s loyalty. Now countries must be wondering what’s going to happen with a new administration. Putin has called this a CIA plot…. there are reasonable people believing him.

AA: Where do we go now from here with FIFA and Blatter? I thought Taylor Twellman made some good points that removing Blatter from power won’t neceassrily be the fix-all because corruption is so inherent and drips from head to toe in the body of FIFA. With Blatter’s removal/resignation what is next to further clean up world soccer? What additional steps need to take place?

Ley: Actually Blatter made a valid point, he’s had 16 years to do this so better late than never, he made a valid point about the ExCo being too large and criteria for putting people on there. But a lot of leadership is appearances and Blatter’s appearance doesn’t engender confidence in people. That’s the difference in the way you see some political leaders recently deal with crises in their cities. Some mayors look assertive and hands-on, others look feckless and lost in space. In a moment of crisis, leadership is to a large extent an intangible. Having someone in there who will give an appearance of knowing what they’re doing will make a difference. In Prince Ali’s speeches last week he said “reform isn’t a moment, reform isn’t a process.” He’s right. We say FIFA and throw that prhase around but it’s the confederations and people on the ExCo.

It’s going to take more than a few years for word to get out that a contract is what a contract is and there’s no extra money in it for you. Are you going to get rid of it all? No. But I think people would say to a large extent the Olympic movement is more transparent than what it was 20 years ago because of what happened in Salt Lake City. It is possible.