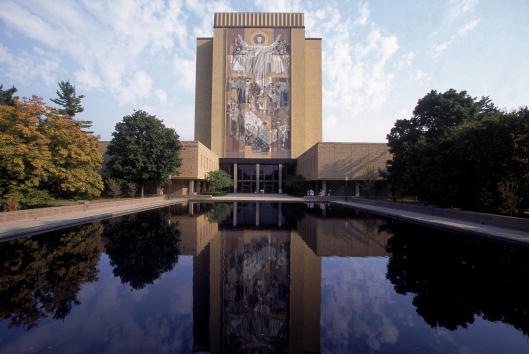 If you mention “1988” to Notre Dame fans, you’ll get a smile in return. It’s the year when the Notre Dame football team coached by Lou Holtz won the college football national championship. That year, the Fighting Irish went 12-0 defeating Miami in the famous “Catholics vs. Convicts” game, traditional rival USC and culminating with its win over West Virginia in the Fiesta Bowl.

It was quite an interesting season for Notre Dame and ESPN has commissioned a 30 for 30 documentary to be produced by renowned director Patrick Creadon who is a Notre Dame alum and lived through the 1988 season as a senior on campus. Not only did he watch the games, but he was also friends with quarterback Tony Rice.

For Creadon, this project will be a labor of love:

“My wife (Christine O’Malley) and I are a film-making team,” said Creadon, a Riverside, Ill., native and Southern California resident. “We had wanted to work with 30 for 30 before, and they had pitched us stories in the past, but none of them seemed like a great fit.

“But (in May), two months after my father passed away, they sent us an e-mail out of the blue. They said, ‘You went to Notre Dame, right? What do you know about the Catholics vs. Convicts football game?’

Filming has already begun. Creadon will interview Holtz for the documentary later this week and then former Miami Hurricanes quarterback Steve Walsh. While the work has started, there’s no affirmed air date or title for the project. All we know is that there will be a 30 for 30 on Notre Dame.

And the Catholics vs. Convicts game will be a big part of the film. While the two schools have met sparingly since 1990, once in the 2010 Sun Bowl and again in 2012, Creadon said the 1988 game transcended sports:

“This is an incredibly powerful and inspiring story on both sides of the football,” Creadon said. “The main story happened on the football field, but the secondary stories around it are unbelievable.

“(Miami coach) Jimmy Johnson and Lou Holtz had a very, very deep history before that game. There’s one involving former president Ronald Reagan. Everyone we’ve asked to be in the film has said ‘absolutely.’”

So as this year’s Notre Dame team fights its way through the 2015 season, fans will have an opportunity to look back rather fondly at the 1988 National Championship when the 30 for 30 hits the air.