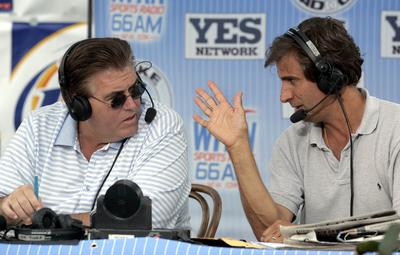 Jimmy Fallon gave us the television event of the millennium this week by bringing back the original cast of Saved By the Bell for a real, actual, non-Lifetime reunion.  Ok, so it wasn’t the full ensemble because Screech stabbed a guy or something, but close enough.

The wistful reunion at Bayside High got us thinking – what are some reunions we’d give anything to see in the sports media world?  From rights deals, to long-time partners, to announcing tandems that clicked just right, here’s our list of the bands we wish would get back together…

8) Paul Azinger & Nick Faldo – Although the two longtime rivals were paired together for a short time at ABC, they (along with play by play man Mike Tirico) formed a strangely compelling analyst partnership from 2004-2006.  It’s very rare that an announcing team in the tranquility of a golf telecast will give you reason to watch, but the sparks between Azinger and Faldo were something totally unique.  With ABC/ESPN’s exit from regular PGA Tour coverage, Faldo went to be the lead analyst at CBS while Azinger remained with ESPN’s coverage of the majors.

7) Crowd Goes Wild – The quirky, wonky daily show was the one thing Fox Sports 1 has produced that has been a true alternative to ESPN.  And although it was canceled due to low ratings less than a year into its run and you’d never consider this a contender for a Sports Emmy, we have to admit that we miss CGW.  Graduate Katie Nolan has succeeded on the web, but the mix of the cast of characters including Trevor Pryce, Georgie Thompson, Jason Gay, and Michael Kosta (and even that Regis guy) represented something different and at times, entertaining.  Fox Sports 1 has struggled to find an original voice since.

6) The NBA & NBC – Only for the sole purpose of hearing once again the best theme in all of sports television.  Bless you, John Tesh.

5) Vin Scully & The World Series – What better way to honor the venerable voice of the Dodgers by having him call one last World Series?  The 87 year old is still working at a high level and hasn’t called a game on the national stage for decades.  There’s a whole population of younger baseball fans that have never had the privilege of listening to Scully call a game.  A few years ago a petition to have Scully join the World Series booth gained national headlines that even Joe Buck supported.  Unfortunately, Scully’s return to the Fall Classic never went beyond that.

4) ESPN & The World Cup – ESPN handed the World Cup baton to Fox after signing off from Brazil last summer.  But if many soccer fans had their way, ESPN would be able to keep the tournament.  The jury is still out on Fox’s capabilities to professionally broadcast a major international soccer tournament.  ESPN’s World Cup coverage, and the way they lifted the event into a cultural phenomenon, may be one of the best things the network has ever done in its 35+ year history.  In fact, their World Cup presentation was as close to perfect as you can get.

3) Gus Johnson & The NCAA Tournament – Gus Johnson became a cult favorite for losing his mind during March Madness.  There was no better marriage between sporting event and announcer than Johnson and the NCAA Tournament.  The two were made for each other.  The “Rise and Fire” montage may be the seminal broadcast mashup.

But sensing he was never going to be “the guy” at CBS for the tournament, Gus moved on to Fox Sports.  And although Fox has pushed his popularity and featured him as a star attraction, Johnson’s tenure at the network is most notable for his failed experiment calling soccer.  Furthermore, his role as a college football and basketball announcer throughout the season has never quite found the same magic as during March.

2) Dan Patrick & Keith Olbermann – The Big Show redefined what a sportscast could and should be. The combo of Patrick and Olbermann lifted SportsCenter to a perch in the sports world it has never fallen from.  Over the years ESPN has tried to duplicate the chemistry and the cultural impact of Olbermann & Patrick and they’ve even tried to make sure it never happened again so nobody would become more popular than the brand.  Regardless, there has yet been anything like the original.  There were hopes a reunion could be in the works for one special episode of SportsCenter, but sadly Patrick shot them down.

1) Mike & The Mad Dog – Batman & Robin, Butch Cassidy & The Sundance Kid, Mike & The Mad Dog – these are partnerships that are supposed to be eternal.  Mike Francesa & Chris Russo made the industry of sports talk radio what it was.  This was a true sum that was greater than the parts of its whole.  Ever since their high-profile divorce, the two have never been able to capture the dynamic apart as they did together.  Yes, we all enjoy our Mike Francesa prank calls and the pope falling asleep, or Chris Russo ranting and raving a million miles an hour on MLB Network, but it’s just not the same.