Deadspin’s Greg Howard delivered quite the birthday present to Jason Whitlock on Monday – a 10,000 word magnum opus that effectively buries Whitlock’s planned ESPN vertical The Undefeated before it even officially launches.

Howard has chronicled the inside story of Whitlock’s ESPN venture before with intense questions for the vision and execution of the site, but his latest piece presented something much more detailed with the launch date of The Undefeated rapidly approaching.  The narrative that comes to light is a site, backed by the full resources of the self-proclaimed worldwide leader in sports, that is in major trouble thanks in large part to the man ESPN pegged to be its public face.

Emerging from the massive report by Howard is the picture of Whitlock as more of a detached despot than Editor-in-Chief.  Various sources detailed Whitlock’s compulsive and contradictory behavior, the inner turmoil facing The Undefeated thanks to Whitlock’s leadership, and signs of a true megalomaniac.

In something that seems to be just too detached from reality to be true, Whitlock reportedly peppers his staff with inspirational quotes from some of the great writers and leaders who have ever lived, most notably Jason Whitlock.

Over the last several weeks, Deadspin has, in addition to interviewing a number of people close to the site, acquired more than 100 documents extensively outlining the inner workings of The Undefeated as it prepared for its initial launch: emails, transcripts of staff meetings and phone calls, several versions of the lengthy playbook in which Whitlock outlines his vision for the site, breaking up the text with inspirational quotes from such figures such as Martin Luther King Jr., Maya Angelou, and Jason Whitlock; and more.

“There were 16 inspiring quotes in all, under a request for staffers to send along their own favorite journalism quotes. His old heroes Ralph Wiley, Mike Royko, and David Simon were represented, as was his new one, Michelle Alexander. There were quotes from Maya Angelou and Calvin Hill, and from Mike Krzyzewski and Katharine Graham and Margaret Mead. They accounted for nine quotes. The remaining seven, mixed in with the rest, were from Whitlock himself.”

Here’s a picture of one of Whitlock’s nuggets of motivation from his own manifesto also published in full by Deadspin: 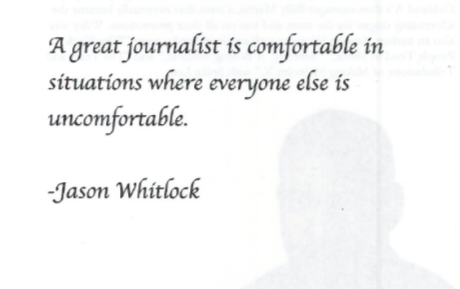 This really isn’t a surprise given how Whitlock has dedicated entire columns to how he deserved to win a Pulitzer.  Surely history will remember Whitlock alongside the likes of King and Angelou… right?  Right?

Perhaps the most alarming revelation from Howard concerning The Undefeated’s impending launch is the dysfunctionality of Whitlock’s relationship with his top editors before The Undefeated even launches.  The hiring of Ebony’s Amy DuBois Barnett as the site’s Executive Editor was hailed by ESPN as a huge step forward for the site.  And yet, a simple e-mail pitch about a pop culture story caused Whitlock to question Barnett’s loyalty to him personally.

Given her refusal to fall in line and given Whitlock’s reaction, it isn’t surprising that Barnett, according to sources, now finds herself on the margins of the site.

Whitlock’s relationship with Barnett, one of the key leaders at the site and ESPN’s second announced hire after only Whitlock, can be best described as fractured and may even be non-existent at this point.

3) Whitlock is trying out for the next Horrible Bosses sequel

The personality traits of Whitlock’s leadership depicted by Howard were, well, not good:

Thus far, The Undefeated has produced vastly more inward-facing copy than outward-facing copy. Whitlock is big on having detailed notes taken on phone calls and meetings; they are often routed to one of his private email accounts in ways that bypass ESPN servers. But the portrait of Whitlock that emerges from these notes is not flattering. He comes across as a catastrophe as a manager—paranoid, demeaning, oblivious, vindictive, unbelievably self-regarding, and, in some cases, truly destructive.

In addition to obsessive micro-management and anecdotes about Whitlock bullying staffers, there was this tidbit about Whitlock firing someone for reasons that included “speaking without being spoken to.”

Whitlock later hired this friend, Erin Buker, as his assistant. She was fired on March 26, about a month after he asked her to resign for, among other things, speaking aloud without first being spoken to in a meeting he didn’t even attend.

Whitlock firing a woman for daring to speak out of turn is going to really lead his site forward into the 19th century.

In a series of mind-blowing revelations, one of the most mind-blowingest of them all was Whitlock planning to fabricate some kind of mythical narrative revolving around Muhammad Ali and LeBron James as a central pillar of The Undefeated.  Whitlock’s thesis is that James has somehow moved on from mere basketball towards becoming a “global role model” and was now challenging Ali’s status as the most influential athlete ever through his business and charitable interests.

How does this make sense to anyone?  It doesn’t unless you were somehow working directly as a mouthpiece of LeBron’s business associates.  Naturally, in Whitlock’s declaration he cites his close relationships with James’ inner circle including Maverick Carter and Rich Paul.  The conflict of interest here makes Stephen A. Smith’s recent series with Floyd Mayweather look like Frost/Nixon.

The nightmarish stories forwarded by Howard’s sources at The Undefeated are like reading a longform Upworthy article.  As you’re reading along, you keep telling yourself, “YOU WON’T BELIEVE WHAT HAPPENS NEXT” and yet somehow Whitlock continues to top himself with his unbelievable antics.

Another in a series of shocking disclosures is Whitlock misrepresenting a conversation with a friend in one of his recent columns and coming awfully close to plagiarizing her words.

On top of all that, Whitlock hired and fired the friend who he misrepresented (the same one who also dared to gasp! speak before being spoken to) and had to be reprimanded by ESPN management over the audacious series of events:

ESPN HR investigated and found, according to a letter from employee relations director Robert Gallo, that Whitlock “did not behave at all times in accordance with ESPN’s Conduct Policy, which includes an expectation to treat coworkers in a professional, courteous, and respectful manner.”

Gallo promised to take “appropriate action.” In response to an inquiry on the nature of this action, an ESPN spokesperson simply said, “We are not going to comment on this personnel matter.”

All this coincided with Whitlock telling his staff they needed to avoid “coasting and cheating.”  How ironic…  WHAT WERE YOU THINKING, JOHN SKIPPER?!?!

6) The mutiny to overthrow Jason Whitlock is already well underway

For Deadspin and Greg Howard to get so much delicate information from inside The Undefeated is truly astounding.  We’re not just talking anonymous quotes ripping Whitlock from individuals working closely with Whitlock at the site and at ESPN, although there were plenty of those:

“This might as well be black McCarthyism,” this person says, incredulously. “Of all the corrosive cynicism that exists in the racial dynamics of this era, the n-word? It’s a tragic forfeiture.”

“His views,” says one person close to the site, “put him firmly within the circumference of white comfort.”

“He realizes,” one person at The Undefeated said, “he hasn’t done anything to deserve this site.”

In addition to that, we’re talking about leaked documents in full as well as e-mail conversations and leaked audio from a staff meeting.  This was not just a couple anonymous sources looking to merely diss Whitlock and question his plans for The Undefeated.  This was a concerted effort to bring him down.  There’s no way this much sensitive, detailed, behind the scenes info leaks out into the public without serious motivation to bring about serious change behind it.

Whitlock’s site had been plagued by uncertainty and delays for months.  Finally it had been gaining momentum with staffing hires and even a sneak peek at the site’s content.  Now, all of that momentum has been halted dead in its tracks with serious questions of Whitlock’s leadership, management, and vision for the site.  It’s going to be fascinating to see how Whitlock, The Undefeated, and ESPN can respond and rebound from such a damning condemnation of where things stand at the present moment.