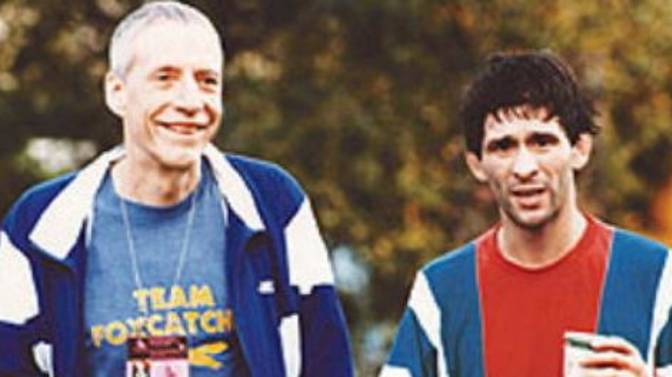 Most Similar To – King’s Ransom, The Marinovich Project

Review –  I spent a lot of time since watching The Prince Of Pennsylvania mulling where to rank this week’s 30 for 30 Installment. Top Ten? Certainly. Top Five? Hmmm….. maybe? Top Three? Potentially. What I settled on is this:

The Prince Of Pennsylvania is the best hour long 30 for 30 in the series. If it were 90 minutes or two hours, I think I’d be a bit more confident placing it higher in my rankings.

I had some reservations about the length of The Prince Of Pennsylvania given most of the hour long installments have not been of the highest quality. The cynical side of me thought this may have just been thrown together to piggyback off of the interest and success in Bennett Miller’s highly acclaimed Foxcatcher. The director’s name also didn’t ring a bell so my expectations going in were middle of the road. I also worried, “Well I watched Foxcatcher and I read some articles after so is there really going to be much here I don’t know?” which was an assumption that couldn’t have been more off-base.

The film is nothing short of compelling wire to wire with plenty of riveting moments along the way. I think for some it maybe too tinged with sadness to stomach and it’s possible some may not enjoy the film because of the lack of focus on an actual sporting event (there is no buildup to a big showdown, underdog narrative, or footage from a memorable game). Nevertheless, I suspect many will be highly engrossed in the documentary as it earns very high marks from me on the two criteria I use to grade these films: 1) How good of a story is it and 2) How well did you tell it.

A huge amount of credit goes to director Jesse Vile as he was able to get a tremendous amount of participation in the film, something that is probably a lot harder when dealing with a tragic story like this opposed to “Wow, that game 20 years ago was crazy right?!?”

The participation from other wrestlers who lived at Foxcatcher including Mark Schultz as well as many members of the Schultz family, John du Pont’s ex-wife, and some close to du Pont adds a lot of additional (and at times conflicting) insight to the simplified narrative featured in Foxcatcher. More importantly though, this support and participation in the film allowed Vile access to an absolute treasure trove of home video footage taken by wrestlers in the many years spent on the farm. Without this footage, which in aggregate is a pretty big chunk of the film, The Prince of Pennsylvania would likely languish as many sports documentaries do when there is just not enough visual storytelling and the rotating cast of interviews begins to grow stale. But instead, through grainy footage we get a very real glimpse of life on Foxcatcher Farms and the dynamics of what transpired there. For instance, this photo below is from a clip in which we ominously see du Pont firing this weapon from his mansion into the woods. 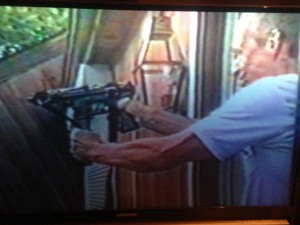 If you liked Foxcatcher, The Prince Of Pennsylvania isn’t just a nice companion piece but it’s rather the authoritative retelling of what exactly happened. Despite being a 50 minute film, the 30 for 30 version goes much deeper in documenting things like du Pont’s growing paranoia, the shift of the training compound and grounds from a serene place to a “militarized zone” where guns and gunshots became an accepted norm, as well as du Pont’s struggles with addiction and mental health.

Packed into one hour, the film is bursting with compelling stories and footage to the point where I twice double-checked the length of it as it seemed much longer (in a good way).  The pace of the film is superb in that viewers won’t find it a challenge to stay away from reading e-mails on their phone or changing the channel. There are no lulls and the film starts and ends with two very powerful and emotional bookends.

Ultimately, The Prince of Pennsylvania is a homerun as it thrives as a vivid retelling of a story so transfixing that you can’t believe it and you can’t turn your head away. If the culminating event in this film occurred today, the web, cable, and social media would be fixated on the story.

ESPN and director Jesse Vile deserve a lot of credit for this installment. Vile for pushing all the right buttons, and ESPN for trusting a director with 90 Twitter followers, no Wikipedia page, and only one other directing credit among very few other credits. Documentary filmmaking is not known to be a lucrative and fast-paced career path and even with that in mind, ESPN has typically fielded a pretty established group of filmmakers and Hollywood veterans to direct and produce the bulk of the 30 for 30 installments. Vile certainly doesn’t fit into either bucket, but churned out a great finished product to the point where I hope ESPN or another network keeps him in mind for future projects.

Given I wasn’t a big fan of of last week’s Trojan War and this week’s scheduled 30 for 30 now finds its airing in limbo, I was encouraged to see the documentary series hit a high point with this installment. I’m confident those who tune in will be rewarded with some very high quality storytelling covering one of the more somber stories the documentary series has ever covered.