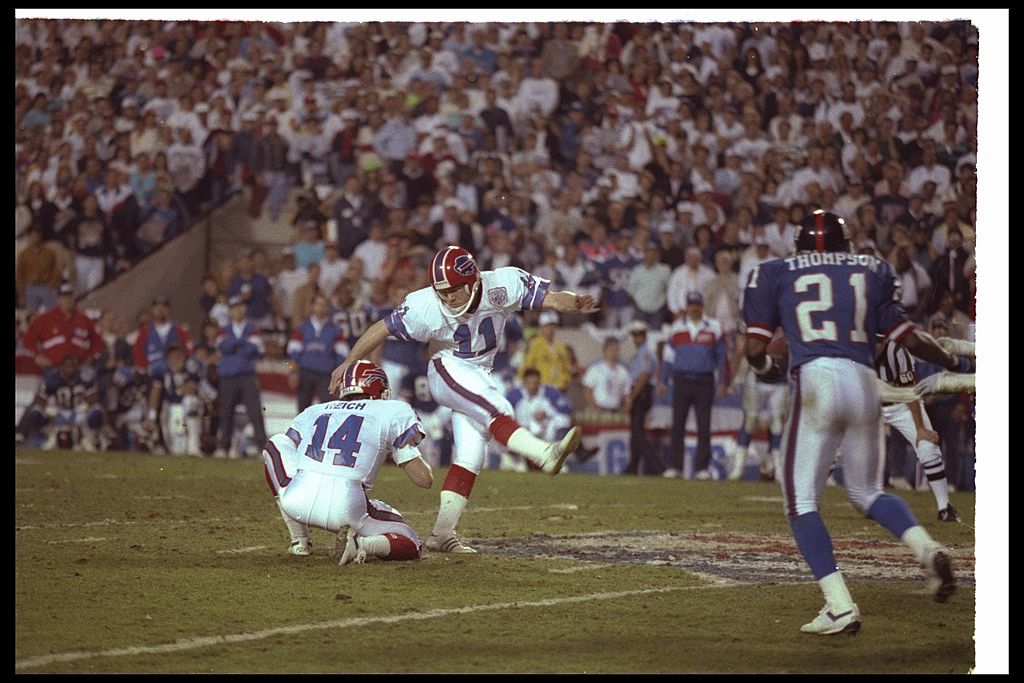 Most Similar To – Elway To Marino, The Fab Five

Review –  Selected for the coveted post-Heisman ceremony slot which juices up ratings compared to other 30 for 30’s, The Four Falls of Buffalo mirrors the team it covers in that it never delivers a thundering climax during its consistently good to great run.

A dozen minutes in, it was pretty evident the film was produced by NFL Films (directed by the highly regarded yet mostly unknown outside of media circles, Ken Rodgers, who has his fingerprints on just about everything from NFL Films you’ve enjoyed over the years).

This was both good and bad depending on your viewpoint. Known for its consistent quality and creative style, and depending on your familiarity with these Bills teams and NFL Films, early on you may be like me in saying “I have a strong sense of how this will play out.” It’s like taking a long-term friend out on a date – you’re excited that it’s different (NFL Films doing a two hour documentary on ESPN), but for the most part you know what to expect.

This isn’t the first 30 for 30 NFL Films has produced with Elway To Marino being the other collaboration within the documentary series. That film was 90 minutes without commercials and revealed a ton of new info about that infamous draft day utilizing the diary of Elway and Marino’s agent, which had previously not been shared publicly. With the shorter length, a more distant story, and littered with mind-blowing insights (The 49ers almost traded Montana for Elway!), Elway To Marino graded out a bit higher for me although the creative quality of the storytelling was at the same very high level as is everything NFL Films does.

Having a pretty good feel for the Bills run as NFL bridesmaid, the idea of a two hour refresher on a team I had little attachment to felt like too much of an ask, regardless of my reverence for NFL Films. For Bills fans and for those who aren’t familiar with those Bills teams, I’d imagine this won’t be an issue.

Despite the familiarity with the narrative, a solid amount of new context and interesting previously unknown morsels of insight were delivered throughout. Given NFL Films was given an expanded runtime rather than some of the one hour windows for A Football Life, The Timeline, Hard Knocks, and Turning Point, it’s nice to see them take a more ambitious crack at telling this story rather than condensing it to one hour. It’s possible the most optimal run time though may have been in 90 minutes as the agony of the Bills’ four straight Super Bowl losses over two hours is a lengthy time to lament the many “what ifs” that prevented the Bills from bringing a championship to Buffalo.

There weren’t many individuals missing from the film in terms of participation and as always NFL Films peppers their work with tremendous archival footage, music, narration, news clips, and on-field footage. The film does drill down a bit deeper into Buffalo’s embracing of Scott Norwood (God bless him and the fans as I’m not confident many fan-bases would go that route) as well as Jim Kelly’s battle with cancer. The playoff comeback versus the Oilers and Leon Lett’s goalline blunder also get some level of focus, but similar to a lot of the work of NFL Films, Four Falls of Buffalo covers so much ground and personalities that no particular moment, storyline, or game gets a deep dive.

Ultimately, the film is quite good and thus the grade right outside the top twenty 30 for 30’s, but that’s with my personal level of intrigue and knowledge on the topic not taken into consideration. At the end of the day, this really comes down to your interest in the topic. Do you want to watch two hours on the Bills’ almost dynasty? If so, this will be quite enjoyable. If not, you may not find enough surprises, revelations, or innovative creative storytelling techniques that warrant the time to rehash it all over two hours.