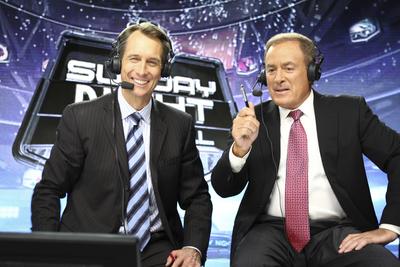 Awful Announcing has always considered itself to be a voice for the fan, so what better way to continue that tradition then by giving the readers the chance to generate the announcing grades for the 2014 NFL season.  Last week our readers graded all 15 of the NFL broadcast booths that called at least 4 games together during the season at Fox, CBS, ESPN, and NBC.  This excludes the likes of Chris Berman and Mike Goldberg who called just one game on national television this season.  That’s probably a good thing for these rankings.

Those votes were tabulated and each team was given a requisite Grade Point Average for our rankings.  Here now are those rankings, along with which letter grade was the most popular choice, and some analysis about the grade and the performance of each broadcast booth this season.  Thanks to everyone who voted.

Analysis: Stockton called most of the NFL schedule this year splitting time with two up and coming analysts at the network in Quinn (5 games) and Morrison (4 games).  There was also 1 game with Donovan McNabb, but we won’t go there.

If you list the most successful announcers in American sports history, Dick Stockton is making the Top 20.  He’s called the World Series and the NBA Finals and been a mainstay for decades.  With all that said though, in 2014 he should not be calling NFL games on national television based on merit.  And that’s been true for multiple years now.  It’s not an age issue as plenty of other announcers with Stockton’s experience are working at a high level.  It’s just that Stockton’s work has not been up to par.  He’ll flash a good call here and there, but there are far too many elementary mistakes that are made routinely.  It’s probably the main reason why this group received the lowest percentage of “A” grades and the highest percentage of “D” and “F” grades in our rankings.

As far as Quinn and Morrison go, both seem to have decent futures in television and deserve more reps in 2015.  Both former players are significant upgrades from the likes of past analysts at the bottom of Fox’s rotation like Torry Holt and Mike Martz. 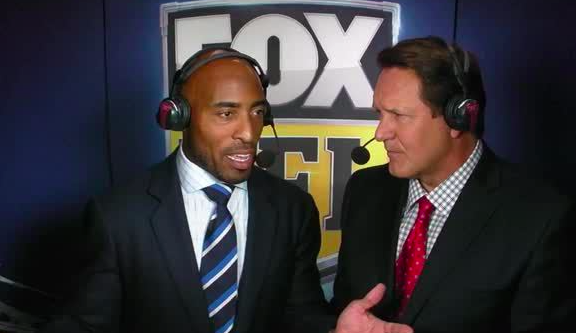 Analysis: Among the broadcast teams that worked every week, Myers and Barber were by far the lowest ranked.  If it weren’t for the previous grouping mentioned (also from Fox), they would have drawn the most “D” and “F” votes from AA readers and the fewest “A” votes.  73.1% of respondents gave Myers & Barber a “C” grade or worse, which isn’t acceptable for a full-time announcing team.

Myers has a unique cadence that has always sounded a bit awkward in the broadcast booth.  He’s much better suited in a hosting or sideline reporting capacity.  Ronde Barber has had a better career behind the microphone than his brother Tiki… but that’s not saying much.

Analysis: CBS experimented with their first three man booth in years near the bottom of their NFL pecking order.  NFL on CBS debutant Catalon was joined by two veteran announcers with the same first name.  The feedback from AA readers about this group was that they were decisively average.  The trio drew the most “C” votes by far and only 15% of voters gave them either an “A” or an “F.”

Catalon is still one of the rising broadcast stars at CBS and has rebounded from an unfortunate episode during the NCAA Tournament.  At this point in their careers, Beuerlein and Tasker are what they are.  I wouldn’t be surprised to see CBS tinker with this group next year as it never really sounded like the two analysts developed the necessary chemistry throughout the season to make the 3 man booth truly work.  An interesting experiment, but one met with a “meh” from fans.

Analysis: The second highest percentage in “C” votes goes to the new pairing of Dedes and Wilcots.  Dedes is one of the youngest play by play men calling NFL games on a full-time basis, but has been on the job for a few years now.  And in that time, perhaps he hasn’t quite made the leap that one would expect given he was one of the real fast risers in the industry a couple years ago.

Wilcots has always been one of the more talkative NFL analysts throughout his career.  This year he made some notable gaffes that went viral, and that habit has been observed by metrics used elsewhere in the past as well.

Analysis: McCarthy and Archuleta were the most consistent of CBS’s part-time NFL announcing brigade that also included the likes of Brian Anderson, Brad Johansen, and Chris Simms.  Ironically enough, McCarthy faired better in this poll than he did in the MLB Local Announcer Rankings as the play by play man for the Phillies where that crew ranked 26th.  McCarthy and Archuleta actually beat out two of CBS’s full-time announcing crews, so it’ll be interesting to see if we see more of them next year.