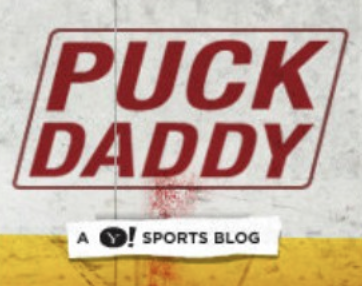 Yahoo Sports’ blog network is a model that has been wildly successful and imitated all across the sports blogosphere.  It’s been one of the leading lights in the coming together of the mainstream sports media and the blogosphere.  Leading the line for Yahoo is their popular Puck Daddy NHL blog edited by Greg Wyshynski.

On Friday Wyshynski announced the firing of writer Harrison Mooney over social media impropriety.  Two weeks ago, Mooney was embroiled in controversy over claims of sexual harassment over texts and Twitter DMs.  Sharks blogger Jen Ramos published an unwelcome advance from Mooney on Twitter and also wrote extensively about the very real difficulties faced by females in the online hockey world.  It’s certainly worth the read to understand this story and its importance.

I didn't intend to drop this info on a Friday night of a holiday weekend, but it's important and we owe it to the PD readership (1/4)

Harrison Mooney is no longer with Yahoo Sports. It’s a decision I supported from start to finish. (2/4)

While I can’t discuss internal details, I hope this action represents my feelings about the gravity of this matter. (3/4)

Thanks for reading, and your patience. (4/4)

In the wake of his public dismissal, Mooney wrote this on his Tumblr page…

As you likely know by now, I no longer work for Yahoo Sports. I’m saddened and disappointed, just as I was when this ordeal began two weeks ago. But as difficult as it was, and is, it’s led me to a even more difficult realization: I did it to myself.

At times in the past year, I’ve used social media as a way to meet women. Clearly, in my attempts to be funny or interesting during conversations, there have been instances where I made unwelcome comments. I did not intend to be malicious, to harass, or even to give anyone pause, and in each case I was foolish and wrong to assume these interactions would be met with anything besides discomfort. But I know that how things are intended is not as important as how they are received. I would like to apologize to those directly involved.

I’ve always wanted to find ways to make hockey more inclusive — whether of race, sexual orientation, or gender — and I recognize that through my actions, I was working against that cause, and paving the way to be seen as a hypocrite.

To that end, I would also like to publicly and sincerely apologize to the hockey community as a whole. I set a poor example of how to make this an inclusive and safe space for everyone.

It’s an unfortunate story all the way around, but hopefully an important lesson for anyone working in sports about the need to act with integrity online and off.