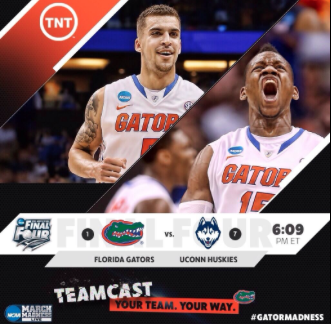 Despite heavy promotion before and during the NCAA Tournament for the CBS/Turner Teamcast concept, there was still massive confusion over the team-centric telecasts on TNT in particular. Despite press releases and stories on how Turner would provide three separate feeds of the NCAA Men’s Final Four and two would be produced for each game, fans and viewers were still perplexed over “bias.”

There were tweets from viewers wondering why the Florida and then Kentucky-based TNT productions were biased towards the teams. And despite scolding from Charles Barkley during halftime of Kentucky-Wisconsin on TBS, those watching the teamcasts on TNT and truTV didn’t see Chuckster’s ripping because each channel produced their own halftime show.

And even with both TNT and truTV clearly having graphics that covered the top right corner of the screen with  “Badgers Teamcast” and the like, viewers still complained about “bias.”

It’s not as if CBS/Turner did not anticipate this. CBS Sports Chairman Sean McManus told the Chicago Tribune prior to the Final Four that he could see the viewers complaints coming. McManus said:

“We have to figure out a way to remind people that these are separate telecasts. I can see Twitter lighting up. ‘Why are they rooting for (that team)?”

And that is exactly what happened. So let’s examine why there was confusion over the Teamcasts and what CBS/Turner can do to prevent this same situation next year.

Yes, CBS and Turner did their best to promote the Teamcasts this year, but with this being the first year of a new concept, you would think both entities would go out of their way to get the message out. After last Sunday’s regional finals, CBS had an opportunity to promote the Final Four before signing off, but chose to go to 60 Minutes immediately. There was no mention of the Teamcast, just a quick sign off before CBS went to black.

Turner has used creative marketing like a New York subway car to promote the MLB Postseason. The Teamcast could have used something similar to reach fans in each of the markets participating in the Final Four.

When viewers were searching for the Final Four on their cable or satellite guides, the listings for TBS, TNT and truTV were all the same “NCAA Men’s Final Four,” or at least that is the way it looked on DirecTV to which I subscribe. With TNT, truTV and TBS all grouped together from Channels 245-247 on the satellite provider, viewers did not know if these were separate feeds or a simulcast. And with TNT listed first and known for its NBA coverage, it’s natural for viewers to flip there before the other networks. If Turner plans to do the Teamcast again in 2015 and 2016, it might be best to make separate listings for each channel so fans will know TNT and truTV are team channels.

3. Move the Final Four to TNT

This is related to #2. Viewers know TNT as their NBA destination so why not have the Final Four main national feed on TNT and use TBS and truTV for the Teamcasts? It’s understood that Turner wants to make TBS its destination for the NCAA Tournament, but it still can be home for the Regional Finals. TNT is so well known among NBA fans that it was not surprising to see them flip there first before realizing it was Florida and Kentucky-centric for the night.

4. Put the National Halftime Shows on All Feeds

Turner produced separate halftime shows for TNT and truTV and they missed out on hearing the analysis from Charles and his scolding during Kentucky-Wisconsin. Why not allow the local viewers to see the halftime show and perhaps an explanation of the Teamcast for viewers just joining the game? As we know, not everyone watches from the beginning.

The Teamcast concept still has some kinks to work out for next year. CBS and Turner will tweak it so fans get the message and understand what they’re doing. Turner will air the Final Four again in 2015 and 2016 so they have time to make sure this works completely.