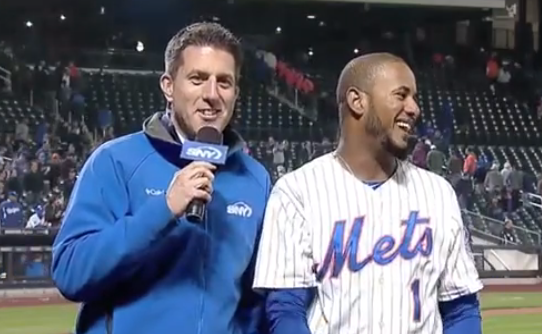 This Saturday you couldn't help but notice the diametrically opposed CBS and Fox announcing teams for the NFL Divisional Playoffs.  In the early game, Fox rewarded the team of rookie play by play man Kevin Burkhardt and John Lynch with their first playoff assignment.  In the late game, Hall of Famer Dan Dierdorf announced his last game alongside Greg Gumbel for the eighth consecutive year.  Dierdorf had called a playoff game for CBS every year since joining the network for the 1999 season and Gumbel has been either the #1 or #2 announcer at the network save for two seasons when he hosted The NFL Today.

Only one of the broadcast teams were there based on merit – the Fox duo of Burkhardt and Lynch.  The pair received positive reviews for their work on Fox throughout the season and the network has made it known their second playoff assignment is no longer set in stone as it had been for several years.  Last year Thom Brennaman and Brian Billick replaced Kenny Albert, Daryl Johnston, and Tony Siragusa for the Divisional Round game.  This year it was Burkhardt and Lynch.  Fox has shown they are willing to give deserving announcers a chance on the big stage instead of depending solely on entrenched boardroom hierarchy.  While Billick had some notable gaffes in the final minutes of the Seahawks-Falcons playoff game last season, Burkhardt and Lynch delivered a typically solid performance in their debut on the national stage.  If you can win over Stone Cold Steve Austin, you can win over America.

Compare that to CBS, who delivered a broadcast that could best be described as business as usual.  Dierdorf has given much of his life to the game of football as a player and a broadcaster and should be commended for that career, but it's quite the leap to say that he's the second best NFL analyst working at CBS in 2014.  The team of Gumbel and Dierdorf weren't calling Patriots-Colts based on merit or how good a job they did during the regular season.  They were there because they've always been there.

Announcing jobs in sports is one of the few professions in society that isn't continually based on merit.  Imagine if your productivity or quality of work dropped at your day job.  You would be demoted or even fired if your work suffered a great deal.  What about the sports that these networks cover?  The Super Bowl and World Series aren't contested between the same two teams every year, so why should networks assign the same announcers week after week, year after year to their biggest sporting events?  Fans should ask themselves – is it really the birthright of Jim Nantz, Phil Simms, Joe Buck, Tim McCarver, Al Michaels, Bob Costas, Chris Berman and others to be in their positions as lifetime appointments?  Instead of a merit based system, once announcers climb the ladder to the top they stay there until they decide to walk away no matter how much criticism or praise their work may receive.

All over the sports world are examples of deserving announcers being held back from great opportunities because of the holiness of the status quo.  In fact, there's almost too many to list in this space.  It's the central reason why Gus Johnson left CBS for Fox Sports – he couldn't break the March Madness glass ceiling that was Jim Nantz.  How many years has Trey Wingo deserved to be the lead studio anchor for ESPN's NFL coverage for his excellent work?  It's a subjective business, but consider how many younger announcers have been passed over by multiple networks that have decided to stick with older announcers who are bigger names, but well past their prime.

For multiple seasons now, media analysts and fans alike have been calling for Ian Eagle and Dan Fouts to receive a promotion from CBS, much like Fox gave Kevin Burkhardt and John Lynch.  Eagle and Fouts have proven to be the best NFL announcing team at CBS over the past few seasons.  In a merit based system, they should be the ones who deserve an opportunity to call the AFC Championship Game this weekend.  They are informative, entertaining, and have great chemistry together.  However, Eagle and Fouts will never sniff that kind of opportunity as long as Nantz and Simms have working vocal cords, let alone a chance to move to #2.  CBS has refused to budge from their predetermined hierarchy, no matter how deserving younger and yes, better, announcers may be.

Only now that there's a break in that hierarchy is there a realistic chance that Eagle and Fouts will move up the pecking order.  Will it happen?  Who knows.  It's likely CBS could find someone else to pair with Greg Gumbel as their #2 broadcast team because, again, Gumbel has always been there.

Imagine how much different it would be if announcing assignments were based solely on merit and not longevity or name recognition.  What if networks rotated who got to call the Super Bowl or host the Olympics?  We got a window into that realm with Fox's NFL Playoffs assignments this weekend and the universe shockingly did not collapse on itself.  In fact, it turned out to be a victory for everyone involved.  Fans were given a higher quality broadcast for Saints-Seahawks and Fox now has a legitimate top NFL announcing team in Burkhardt and Lynch.  If more announcers were given more opportunities across sports, it would do wonders in giving a new, fresh perspective to broadcasts and build new stars across the industry.  And isn't that more beneficial than seeing the same ol' same ol' year after year?

Perhaps another Kevin Burkhardt is out there waiting to be the next breakout star in broadcasting.  All he or she needs is an opportunity and a network brave enough to break away from their status quo.