This weekend a lot of noise was made over shots being fired between ESPN and Fox Sports 1.  During Disney Investor Day in Bristol, Connecticut several ESPN executives puffed out their chests and turned their noses up at their current competition, particularly newest upstart Fox Sports 1.  Most notably, ESPN executive Artie Bulgrin told shareholders, “Nobody’s naming their kid Fox Sports One.”

Fox Sports 1 didn’t take those slings and arrows lying down as Jay Onrait made fun of the quote on an episode of Fox Sports Live.

Ever since FS1 launched, the two sides have traded barbs in public as analysts and observers view Rupert Murdoch’s empire as the biggest long-term threat to ESPN’s kingdom.  FS1 has done everything possible to present themselves as a viable alternative to ESPN, whether that be a Tebow Swear Jar to mock Bristol, showing hockey highlights, or even emphasizing Vegas spreads.  Murdoch has recently gone on record as stating that even though FS1 might lose money initially, the network would gradually be built into a major alternative to ESPN.  That’s smart to lower expectations because early returns have shown that Fox Sports 1 is light years away from directly competing with ESPN at the moment, although the network has had their moments with FS Live beating SportsCenter head-to-head at least once in Year 1 being a significant achievement.

The truth is that while ESPN vs Fox Sports 1 has gotten all the headlines, the real battle in the cable sports world is Fox Sports 1 vs NBCSN for the #2 slot.  The peacock’s sports outfit has been content to sit in the shadows quietly and let FS1 target ESPN when they are the real competition for FS1 at the moment.  NBCSN has slowly built a sports network targeted towards niche audiences while not ruffling feathers.  While FS1 has pursued direct competition with ESPN (to unimpressive results) NBCSN has stayed away from mirroring the ESPN schedule and instead played to their strengths – relationships with the NHL, EPL, MLS, F1, and the Olympics.

So just who is #2 at the moment behind ESPN?  Thanks to the ratings database that is Son of the Bronx, we have public access to viewership data for these channels.  And when one looks across the first quarter of 2014, the race between FS1 and NBCSN behind ESPN is very close.  FS1 has a slight lead in primetime, but thanks to the power of the Olympics, NBCSN has had a much higher total day viewership than Fox Sports 1 so far in 2014.  All numbers are for January 6th – April 13th. 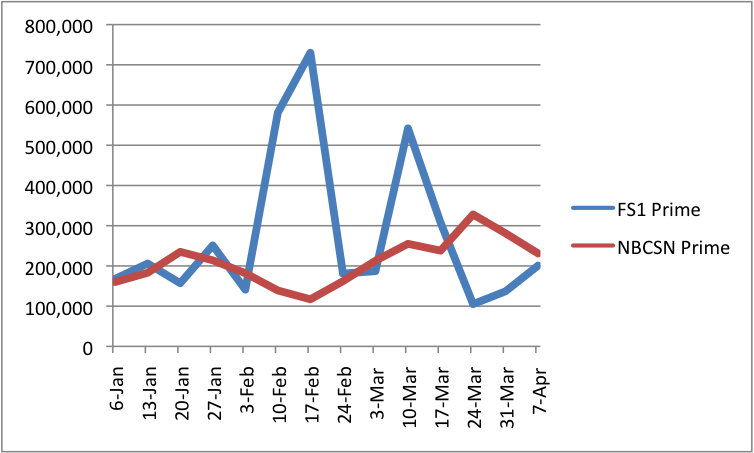 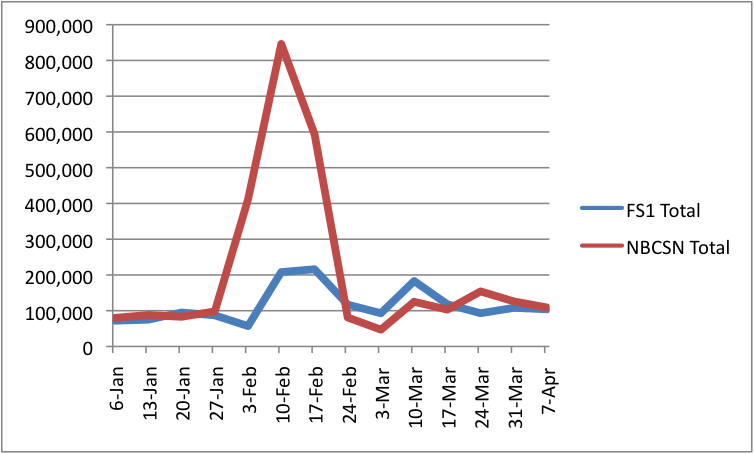 Although primetime audiences are traditionally much larger than total day, NBCSN averaged more than 6 times the audience for total day than primetime during their peak Olympic coverage.  During the week of February 10th, the peacock averaged 846,000 viewers for total day and beat FS1 by a margin of 4-1.  Additionally, live Premier League matches during the day has given NBCSN a real boost in ratings as well.  There’s a reason why the network is celebrating its most watched quarter in network history.  However, if you take out the three weeks when NBCSN was bolstered by the Winter Olympics thanks to live events in daytime, the network’s total day average dips below FS1 to 99,455 viewers.

Fox Sports 1’s strongest weeks thus far in 2014 also came during February, but their ratings were boosted thanks to NASCAR.  The Sprint Unlimited and Duel at Daytona are FS1’s most watched programs in network history.  The network has also been lifted by live UFC fight cards that have rated well.

So who’s #2 at the moment?  You would be well within your rights to give that nod to NBCSN thanks to the Olympic bump during February and the consistency of the EPL and NHL so far in 2014.  Fox Sports 1 may have more long-term potential and may be more willing to get big live event packages, but they’re not seeing those fruits right now.  Futhermore, FS1’s biggest ratings winner at the moment, NASCAR, will soon join NBCSN as well.  And the reality for both these networks is that no package will be as big as the Olympics in the near future.  Even though they haven’t made as much bluster as their cable sports rivals, NBCSN may just have their nose in front of FS1 right now.

However, neither NBCSN or FS1 is the #2 cable sports network in the land.  You see, that is a bit of a trick question.

The title of #2 cable sports network belongs to ESPN2.

Thanks to the numbers and the chart below, you can see just how far behind ESPN these prospective challengers are and the fact that they still rate behind ESPN2 in total average viewership.  So far in 2014, ESPN is beating NBCSN by an average ration of 3.6-1 and FS1 by an average ratio of 6.5-1. 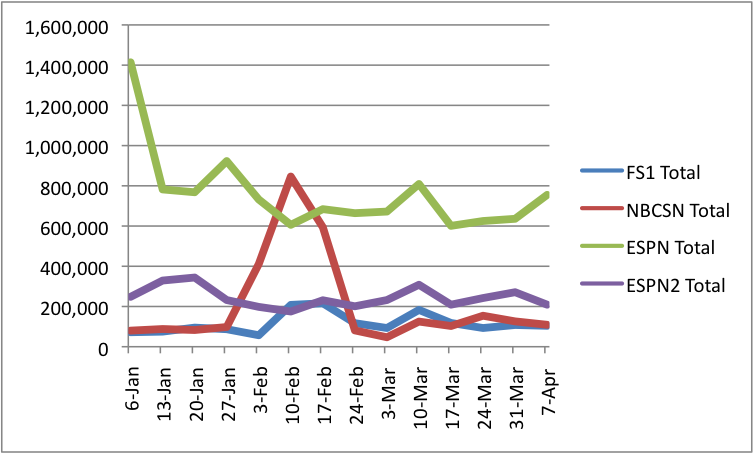 So while Fox Sports 1 may have their sights set on ESPN, they first need to pass NBCSN and ESPN2 before they can begin to do battle with the self-proclaimed worldwide leader.  At least we can hope no parents have named any of their children “Espn2.”  Yet.

(NOTE: ESPN and ESPN2 are distributed in 97 million homes while FS1 is in 88 million and NBCSN is in 78 million at last check.)

Ratings data via Son of the Bronx