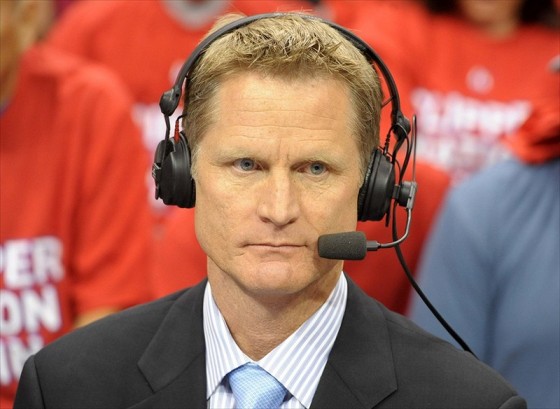 Rumors have been flying across the New York area and the NBA that TNT analyst Steve Kerr will be Phil Jackson’s pick to coach the New York Knicks next season. It could be the rare example of a lead analyst at a network actually giving in to the rumors flying around him for various head coaching jobs. Eat your heart out, Jon Gruden.

The loss of Kerr would force Turner to reevaluate their lead analyst position at what will be a key time for them. This person would likely lead TNT into the next television deal. It’s also worth noting that should this replacement be needed, they would likely be Marv Albert’s final partner for the NBA, though you never know, he seems capable of going on forever.

Here are some ideas for new candidates, based on who we think will get a look, and who really should get the gig:

Currently number two at the network, and obviously someone with high name recognition, particularly in New York (don’t you grumble at me, Knicks fans!). That said, the internet (including us, a couple times) isn’t necessarily a big fan, and he’ll often get called out on his stuff on Twitter. Does that matter? Should it matter? Miller’s obviously held in good graces at Turner and would have the inside track.

He’s only recently begun his television career, but has been gaining reps on the revival of NBA Inside Stuff and some studio work. He’s in the Turner family with NBATV, and has said on our podcast that he would be interested in stepping into the broadcast booth. It’s hard to think of a more well-liked player the past two decades in the sport. The question is simply whether he’s too green at this time to get such a big job.

Webber seems like the safest pick. He’s solid, has been famous since he was a teenager, and has been sort of the sixth man off the bench for TNT, replacing someone on an off-night for Inside the NBA as well as doing game work. Honestly, Webber seems like the person they’d be most likely to come back to should the spot come open.

This is the big leap of logic, assuming that A. Nash would retire to work in broadcasting and B. Turner would want to give him the job as a TV rookie. That said… he’s as charismatic a player as it gets, the most popular Canadian in league history (for whatever that matters) and he’d be a big name get to replace Kerr. Would he jump at the opportunity instead of stretching out his career one more year?

Here’s the three from long-range guess. Chuck is always going on about how he’s found studio work a bit stagnant, and not knowing how much longer he can do it for. Why not finally give him his wish, and let him call more games in-person, since he’s head and shoulders above the rest of the world as far as analysts go?

Sure, Turner would be breaking up the dynamic that’s made Inside the NBA the best studio show in sports. But there’s something to be said about going out on top and providing a new opportunity for your most recognizable personality. If moving Barkley to the broadcast booth keeps him at Turner for a few more years, it might be worth the risk.