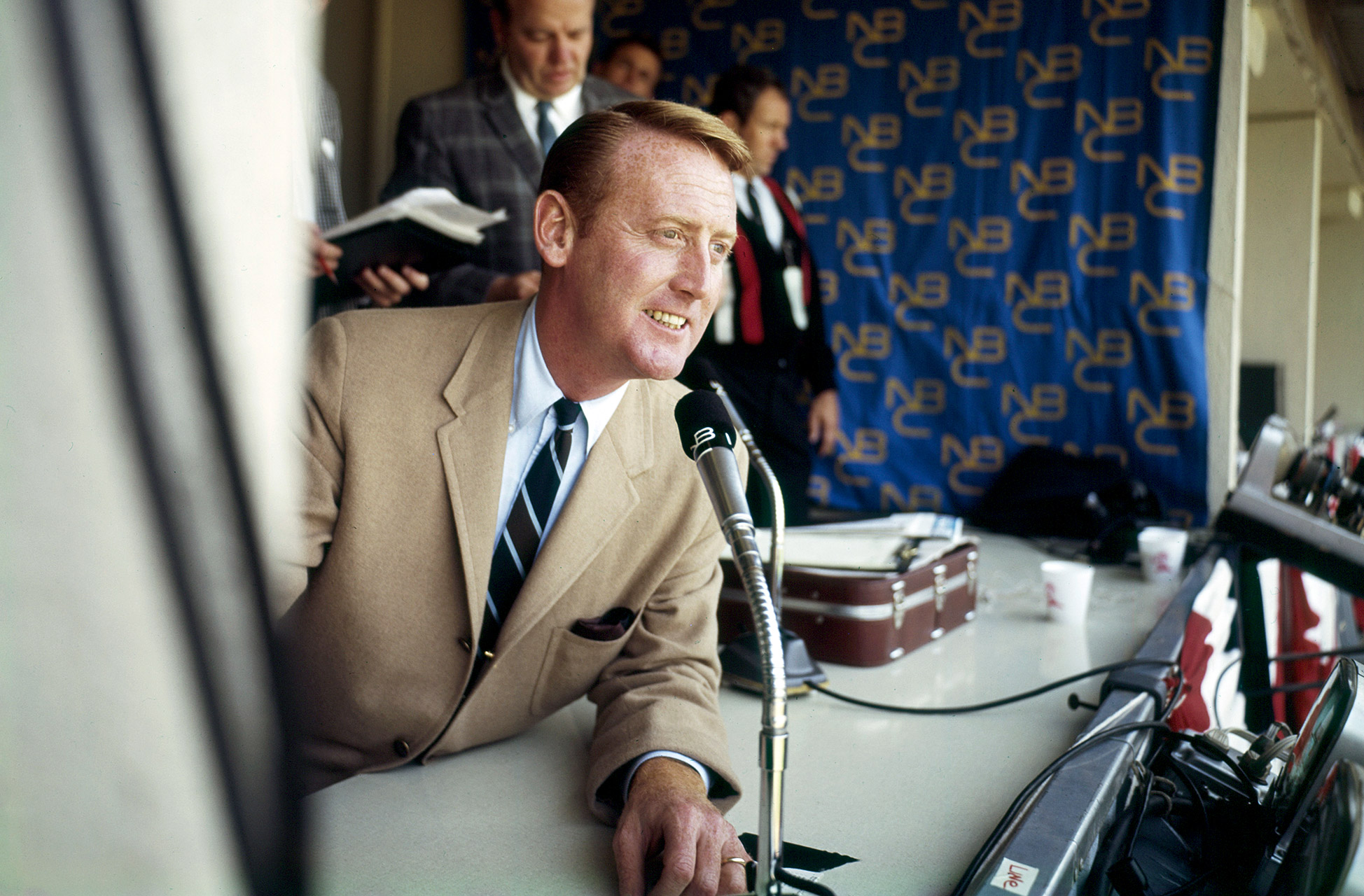 The following post comes to us from The Sports Daily‘s Brian Wright.

The Los Angeles Dodgers announced on Tuesday that long-time announcer Vin Scully will return in 2015 for his 66th season with the team. His reign of greatness in the booth will continue.

He started this gig back in 1950. The color television had yet to be sold. The Berlin Wall had not yet gone up. The Dodgers, then in Brooklyn, had yet to win a title.

Since, Scully has witnessed and spoken about a wide scope of baseball history (as well as some dabbling in football, golf and tennis). He’s been behind the mic for 25 World Series, 12 All-Star games and three perfect games. He’s called the play of so many baseball notables: from Jackie Robinson and Sandy Koufax, to Mike Piazza and Yasiel Puig.

That’s why this particular moment was so special.

It’s hard to find someone that has held the same job for as long as he has. It’s even harder to find someone who does his job so well. Among his many accolades, Scully was given a star on the Hollywood Walk of Fame and received the Ford C. Frick Award in 1982—recognizing his place in the broadcaster’s wing of the Baseball Hall of Fame.

Simply put, Scully is the announcer that every budding play-by-play person dreams of becoming. The only problem is, getting to his level is like climbing Mount Everest—if Mount Everest was twice as tall.

Among the countless moments that we’ve had the pleasure to hear him describe, here are the eight best calls from this beloved icon to Dodger fans by the quintessential voice of baseball.

8. Storytime with Scully
There are many reasons why Vin Scully is still the best in the business, even at age 86. It’s not due to his description of the important plays, but rather how he seamlessly weaves in stories—sometimes historical, sometimes about the players currently on the field—in between the play-by-play.

It’s why so many fans brought their transistor radios to Dodger home games and why so many today stay up past midnight to tune in via MLB’s website—even if it may be a semi-meaningless contest in June or July.

When he announced on-air that he was returning to the booth in 2012, he said, “You and I have been friends a long time.” That one-on-one connection between broadcaster and fan is often pursued, yet rarely achieved. That same connection is evident when he brings up stories of the past, usually prefaced with “Did I ever tell you about the time…?”.

Here is one of his best personal anecdotes about when he went ice skating with Jackie Robinson.

7. Bo Jackson’s home run—1989 All-Star Game
As the lead play-by-play voice of baseball for NBC Sports from 1983-89, Scully got the chance to call the All-Star Game. Several notables were on hand for the 60th edition of the Midsummer Classic at Anaheim Stadium. Among them, former president Ronald Reagan—a former sports broadcaster who was set to call the first inning with Vin.

National leaders aside, it was all set to be a showcase for two-sport star Bo Jackson, making his first appearance in this setting. Simply put, he didn’t disappoint.

Just three years later, he was on hand for another extraordinary accomplishment. Yankees pitcher Don Larsen threw the first (and only) perfect game in the history of the World Series, with the last out coming on a strikeout of Dodger hitter Dale Mitchell.

For years, this historical moment was accompanied by the radio call of Bob Wolff. Recently, however, the television broadcast—with Scully behind the mic for the top of the ninth inning—has surfaced.

5. Fernando Valenzuela’s no-hitter in 1990
Long before the Yasiel Puig craze, there was “Fernandomania.” To a city comprised of many with Mexican backgrounds, Valenzuela’s sudden emergence onto the scene in 1981 brought joy not just to that community, but to all Dodger fans.

Valenzuela remained consistent on the mound, becoming one of the winningest pitchers of the decade. But his finest outing happened in the next decade. He shut the Cardinals down on June 29, 1990, and the no-hitter was capped off by a double play by former teammate Pedro Guerrero. Another ex-Dodger, Dave Stewart, threw a no-no earlier that night.

Scully exalted soon after the finals outs were made: “If you have a sombrero, throw it to the sky!”

4. Bill Buckner’s error—Game 6 of the 1986 World Series
“If one picture is worth a thousand words, you have seen about a million words.”

Apt words amidst the insanity that followed the New York Mets’ 10th inning rally to avoid elimination and prevail in Game 6. It was a rally capped by Bill Buckner’s infamous miscue and a call that all Mets fans love (and all Red Sox fans loath).

It was a moment that—in its aftermath—didn’t need a voice. Scully, as he does so well, let the roar of the crowd and the images tell the story.

Viewers on NBC witnessed both exaltation from the Mets and the Shea Stadium crowd, as well as disbelief and despair from the Red Sox. Proof that the best announcers do more sometimes by saying less.

3. Hank Aaron’s 715th home run
Aaron’s pursuit of Babe Ruth’s all-time home run record reached its climax in the early part of the 1974 season. He tied the mark on Opening Day in Cincinnati.

Less than a week later, Aaron and the Atlanta Braves were back home at Atlanta-Fulton County Stadium. Serendipitously, the Dodgers were in town with Scully on his usual assignment.

No. 715 happened on April 8, 1974. L.A. pitcher Al Downing delivered a fastball, which Aaron promptly launched over the left field fence to an explosion of cheers from the partisan crowd.

After Aaron rounded the bases and was greeted by his teammates and his parents, Scully eventually interjected to recognize the social significance of this home run—still one of the greatest in baseball history.

2. Kirk Gibson’s home run—Game 1 of the 1988 World Series
The Dodgers were heavy underdogs against the powerful Oakland A’s, made more so by the fact that their top hitter, Kirk Gibson, was suffering from injured legs.

Trailing 4-3 with one on and two outs in the ninth inning, and dominant Oakland closer Dennis Eckersley on the mound, L.A. manager Tommy Lasorda sent Gibson up to pinch hit.

What happened next was moment made for Hollywood. The hobbled Gibson connected on a 3-2 pitch that sailed over the right-field fence—giving the Dodgers an amazing 5-4 win.

Scully, again doing the national broadcast on NBC, did what he does best. While raising his voice to the level of the moment, he kept it simple. Then, he went silent. Nothing needed to be said—and nothing was said for about two minutes.

He broke the silence with a statement that was succinct, accurate and fabulous: “In a year that has been so improbable, the impossible has happened.” That magic Gibson produced (and Scully described) carried over for the rest of the series, as the Dodgers won the championship in five games.

1. Sandy Koufax’s perfect game vs. Cubs in 1965
While the Gibson home run was the most memorable moment Scully happened to be a part of, his best performance came on Sept. 9, 1965, with the Dodgers hosting the Chicago Cubs.

Sandy Koufax, already with three no-hitters in his rear view mirror, was heading to the mound in the top of the ninth—having yet to allow a Cub to reach base. And thus came 15 minutes of perfection—both from the mound and the microphone.

Charles Einstein’s book, The Baseball Reader, transcribes that ninth inning radio call word-for-word. “As you read Scully’s spontaneous description, it will become hard to believe that this wasn’t written, but indeed the unrehearsed spoken word instead.”

Capturing the drama and building tension, Scully immaculately painted the picture of the moment better than anything that could have been shown on a television screen.

For anyone that loves the game and the art of broadcasting, this is nirvana.