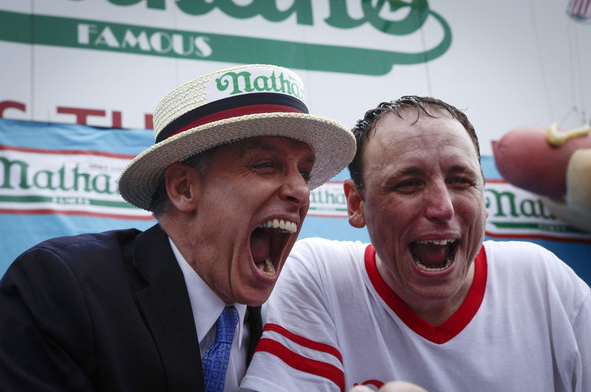 Imagine Don King and Ray Hudson fused into a single human being.

That’s what we have in George Shea, who serves as the host and comic relief for the annual Nathan’s Famous Hot Dog Eating Contest. Shea’s over-the-top introductions are as much a Fourth of July tradition as the contest itself.

He was at it again on Friday, bringing his usual verbal flourish and tongue-in-cheek humor to the Coney Island crowd and the ESPN audience.

We put together a highlight package of his most ridiculous intros:

Who knew there was a World Burping Championship?

Not to be outdone, George’s brother, Rich, added his own brand of humor in his role as color commentator. On the prospect of Joey Chestnut winning his eighth consecutive title, he said, “I am not prone to hyperbole, but if this happens it would be the greatest achievement in the history of man.”

All in all, another memorable broadcast for the Shea brothers, who make the hot dog eating contest appointment viewing every Independence Day.