At some point I imagine I’ll let it rip with a post on my personal attachment and history tied to Brent Musburger as the lead play by play announcer for ABC/ESPN’s college football coverage. Suffice to say, I’m a fan to the point where friends have heard the story of my affection for Musburger more than how their parents met.

When news of Musburger’s demotion was rumored, I took it in stride. I’m pretty fond of Chris Fowler, Rece Davis, and Joe Tessitore and with Musburger getting older and college football rights being spread to more networks, there needed to be some upward mobility. If there wasn’t, ESPN may have found some of their core younger talent taking a look at opportunities elsewhere. Perhaps it took me back to growing up a 49ers fan and seeing them send off Joe Montana and opt for Steve Young.

Fowler eventually got the nod, a decision I was lukewarm with at the time as I thought Tessitore was the most natural fit for a replacement to Musburger and a good reward for stomaching being paired with Matt Millen.

I’ve watched a limited amount of Fowler paired with Herbstreit and found it to be pretty meh thus far. Sure their banter in between plays was a more thoughtful kind of discourse, but the actual calls of big plays and the overall feel just don’t seem right. Apparently the promo department at ESPN feels the same way as they’ve been using “Big Game Brent” to hype games he’s not even involved with.

It’s subtle. You hear Musburger’s voice and for a second and you escape your weekday routine and dream of a fun Saturday night that will start with his patented “You’re Looking Live!” and will be filled with unexpected twists and turns and an ending for the ages.

But Musburger isn’t calling Florida State vs Notre Dame. He’ll be doing Georgia vs. Arkansas. Outside of the SEC Network’s debut game, it’s been quite a bit of riff raff in terms of quality of games he’s called. It’s possible that outside of Week 1, we won’t see Musburger call another regular season game with two ranked teams playing each other.

So “Big Game Brent” isn’t doing big games anymore and most fans aren’t happy about it. Not being the lead announcer was stomachable but I mean come on….. Sam Houston State and Louisiana Tech? If it were me I’d make it a point to show up sauced for those games and recite every single player prop and team prop that Vegas had on the board.

It’s hard to verbalize it specifically, but Musburger gives games a big game feel. You actively feel as if the games he’s doing will be talked about for years to come and something crazy is right around the corner. You don’t want to miss it even if there is nothing to be missed. In addition, his calls of big plays are and continue to be the best.

The biggest proof of Musburger’s big game appeal? ESPN using his voice to promote the biggest game of the week that they pulled him from. How would it make you feel if you got a demotion at the office and your boss still used your spreadsheet formulas?

When we talk about Musburger people say he’s folksy, poke fun of his not so thinly veiled gambling references, and that “he hasn’t lost something off his fastball” at his older age. Clearly, ESPN agrees to the point where they’re fine attaching his voice to promos to dangle that big game feel in front of prospective viewers despite the fact he’ll be calling a game featuring teams with four combined losses compared to two undefeated teams.

I wasn’t the only one perturbed by this or the fact we won’t be having Musburger in the booth for Notre Dame vs. Florida State. 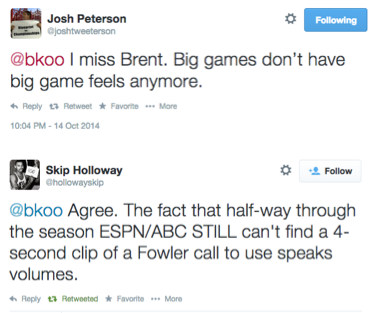 Despite the fact that I think you’d find a pretty strong consensus among fans that prefer Musburger, it’s highly unlikely we’ll see ESPN revisit this. I’d settle for Musburger to be the number two, three, or four play by play guy with ABC/ESPN rather than his current relegation to the SEC Network, but the reality is that unless one of those guys has some type of major issue that would prevent them from calling games, we’re just not going to see Big Game Brent do many big games on fall Saturdays anymore.

Instead we’re left with the haunting ghost of his voice for promos of games he won’t call and instead of the type of nostalgia they’re aiming for, it only makes you realize how dumb his demotion was to start with. If the suits in Bristol want to a big game to seem “big,” then trotting out their former big game announcer’s voice for a promo isn’t going to do it. It’s not fair to fans to hear Musburger’s voice promoting a game he won’t call and most of all, it’s not fair to Musburger.