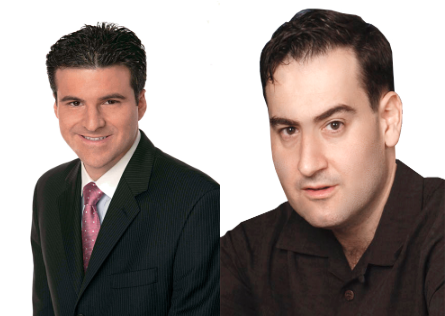 There are some things in this life that are just meant to go together.  Peanut butter and jelly.  Ham and eggs.  Biscuits and gravy.  Chicken and dumplings.  Come to think of it, most of them are food related.

And then, there are the Twitter feeds of Darren Rovell and Richard Deitsch.  They have a magnetic attraction to one another and every now and then the gravitational forces of the universe pull them together to meet… to fight on Twitter over completely random topics.  Seriously, a picture of a phone charger once launched these two into gladiator-like combat.  A phone charger!  That takes some kind of commitment to a greater cause.

We had feared that once Darren Rovell moved from CNBC to ESPN that his Hundred Years Twitter War with Richard Deitsch would come to a halt what with the network's social media policy frowning on that sort of thing.  Thankfully, for popcorn enthusiasts everywhere, the battle has continued to move forward because nobody really follows that anyways.

The fifth chapter in this storied rivalry emerged from what else, the weather in Sochi, Russia and a classic "Empty Crowd Shot" from Rovell.  Deitsch launched the opening salvo, and the rest as they say, is history.

Deitsch vs Rovell.  Rovell vs Deitsch.  Get your popcorn ready, it's a Winter Olympics Twitter War!

Sochi needs to do a better job at seat filling. At Giant Slalom today pic.twitter.com/w3XIjR6Bcn (via @pwm8side)

@richarddeitsch weather matters if you have baseball season tickets, not if you hold tickets to an Olympic event. Big difference.

@darrenrovell Your coverage of the Sochi Games from New Jersey, as always, is impressive.

@darrenrovell I'll let Tim Layden, who covered today's Giant Slalom for SI, know that you thought the weather was nice for crowds.

@richarddeitsch right, because your TV guide is so much better when it’s written from Russia.

@richarddeitsch Broke the speed skating uniform change standing in the Short Hills Mall in NJ. What story did you have in Sochi?

@darrenrovell I talked to your old boss Mark Lazarus. He said he misses the 15,000 people who watched your CNBC show.

@richarddeitsch you mean the show that I hosted for a year and that they committed to continuing had I not left?

Along with writing from here, I've been coordinating our web coverage. Want to say it's been a pleasure working with reporters who are pros.

Those were some uncharacteristically strong jabs from Rovell.  Usually Deitsch focuses on throwing the lofty haymakers while Rovell is more cutting and calculated with his shots.  Think the pure punching power of Manny Pacquiao versus the sweet science of Floyd Mayweather.  Yes, I just compared Deitsch-Rovell to Pacquiao-Mayweather, embrace it folks.

As always, Deitsch's levels of snark and biting sarcasm are off the charts.  The shot at Rovell's reporting chops was a crushing left hook.  (And for what it's worth, Rovell's claim about breaking the US speed skating suit story led to a separate back and forth with Michael McCarthy.)  The thunderous blow at Darren Rovell's old sports business show on NBCSN was right at the beltline.  That made me wince, and I just have to recap these things!  But Rovell came strong too, mocking Deitsch's daily TV Guide posts for an American audience from Russia.  I had thought Rovell would get the last word (again a change from previous fights) but then Deitsch unleashed his secret weapon – the subtweet.  That's like Ric Flair pulling the brass knuckles from his trunks to fell his opponent and then putting his feet on the ropes for good measure.

As for the merits of the argument pertaining to the subject at hand… both guys have a point.  (I can hear the groans echoing across the Atlantic.)  On one hand, if you have Olympic tickets, you would think weather wouldn't deter you from attending.  On the other hand, sitting comfortably back home, it's hard to know what the exact conditions are on the ground.

Both men are viewing this issue from their particular worldviews and an understanding of the other and more tolerance for diverse and differing perspectives would allow Richard Deitsch and Darren Rovell to come together in peace and harmony.

But what's the fun in that?

You decide who wins this Twitter War.  Vote in the official poll below…