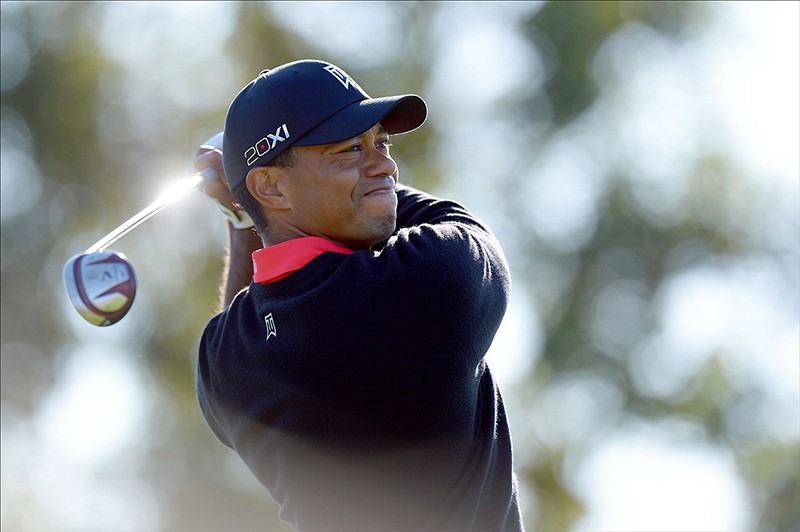 Tiger Woods is no stranger to media feuds, but this one will be the most controversial yet as he’s targeted legendary sportswriter Dan Jenkins with a first-person piece at The Players’ Tribune entitled “Not True, Not Funny.”

In the latest issue of Golf Digest, Jenkins published a satirical interview with a fake Tiger Woods imagining how an interview might play out.  The article isn’t online (UPDATE: Golf Digest has now very wisely posted a link because they could have never have dreamed of better publicity.) but you can see it here referenced on the cover of the December issue (weirdly featuring NFL backup quarterback Johnny Manziel).

Woods did not appreciate the attempt at satire, and he used Derek Jeter’s online players’ club to issue a seething response:

Did you read Dan Jenkins’ interview with me in the latest Golf Digest? I hope not. Because it wasn’t me. It was some jerk he created to pretend he was talking to me. That’s right, Jenkins faked an interview, which fails as parody, and is really more like a grudge-fueled piece of character assassination.

Journalistically and ethically, can you sink any lower?

Of course we know it wasn’t you, Tiger.  It’s on the cover that the interview was fake.

To question the journalistic integrity of Dan Jenkins, who at 84 years old has just ended his streak of covering 179 consecutive majors this summer is going to send major waves throughout golf.  Jenkins is universally regarded as one of the great sportswriters in the history of the industry.  His career writing about golf dates back to his days covering Ben Hogan at the Fort Worth Press.  He’s a World Golf Hall of Famer.

But he’s been a long-time critic of Woods, which is where this unusually public response may find its genesis.  Just take this 2010 Jenkins column after Woods’ personal scandal as an example:

I covered Tiger winning his 14 professional majors, but I can’t say I know him. I knew the smile he put on for TV. I knew the orchestrated remarks he granted us in his press-room interviews. I knew the air he punched when another outrageous putt went in the cup. That’s it.

I once made an effort to get to know the old silicone collector. Tried to arrange dinners with him for a little Q&A, on or off the record, his choice. But the closest I ever got was this word from his agent: “We have nothing to gain.”

This isn’t even the first time Jenkins has used satire to get at Woods.  He wrote a 2004 article making fun of Woods’ relationship with Mark O’Meara in a fake press conference.

Back to Woods.  He continued the criticism of Jenkins’ fake interview and even referenced the lack of interaction between the two over the years.  He also took the time to publicly call out Golf Digest for publishing the piece:

The truth is, Jenkins has no idea how I think or feel about any of the things he claims to know about, which is why he had to make things up. Frustration or resentment because I have not been more available to him should not give him a license for an underhanded attack on me as an athlete, as a professional and as a person. I guess Golf Digest’s editors believe this is a good way to sell more magazines. I’ll bet their readers don’t think so. Funny they didn’t think this poorly of me when I worked with the magazine. I have to say I was surprised when I saw this piece came from Jenkins, who is one of the most distinguished golf writers out there.

Woods ended the article by linking to a letter sent from his agent to Golf Digest referring to Jenkins as a “fabulist.”  This seems to be less about Woods’ dissatisfaction with the genre of satire than it is about settling an old score.

Woods’ ice cold relationship with certain people in the media who make it onto his enemies list is well-known.  Jenkins is a charter member.

What’s unique in this regard is Woods coming to Jeter’s website to issue a public response.  Woods could have easily used his own website or Twitter page or numerous other platforms to accomplish his goal here, but he chose to go to The Players’ Tribune.  The site promises that the Woods column is only the beginning of hearing from more players fighting back against the media, saying “This is the first in a series of columns we’re calling ‘Straight Up.’ It’s a place where athletes can offer their side on something that has been written or said about them.”

UPDATE: Jenkins tweeted out a link to the piece with this response on Twitter:

My next column for Tiger: defining parody and satire. I thought I let him off easy: http://t.co/E7e9imSKwO