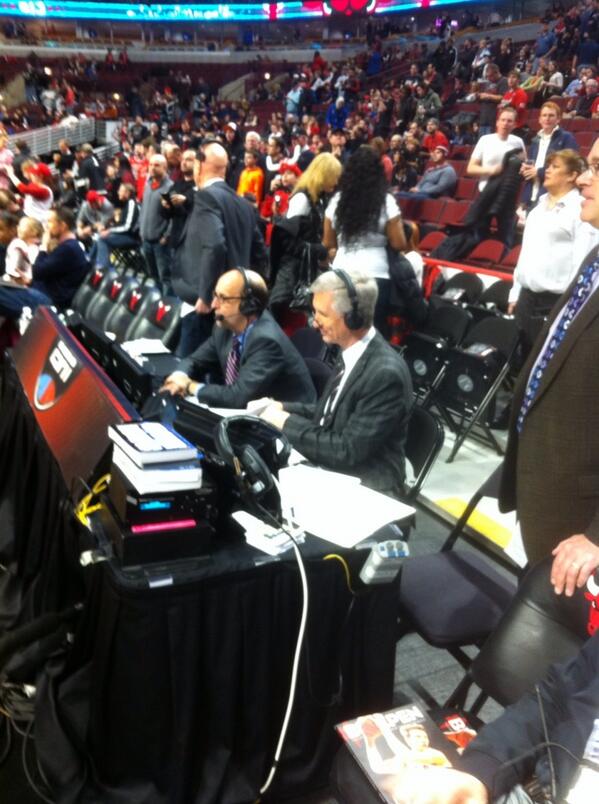 Ed Note: We're pleased to announce a new partnership with Ed Sherman and The Sherman Report.  Content from The Sherman Report will be syndicated periodically at AA with exclusive pieces from Ed as well.  The first of those is a behind the scenes look at the NBA on ABC with Jeff Van Gundy and Mike Breen.

CHICAGO — Veteran sports TV producers and directors always know to be prepared for the unexpected. However, nobody could have seen this coming.

In the endless, soulless winter around here, it seems like the last sighting of the sun coincided with the Cubs winning the 1908 World Series. Yet there was that bright star, in all its radiant glory.

However, the rare appearance created a problem for Jimmy Moore. The director of ABC’s coverage of the Bulls-Miami sent his cameraman out Saturday to get all those various shots of the city that you see during the telecast. They looked great except for one thing. It was cloudy Saturday, as it is virtually every day during the winter gloom in Chicago.

“I can’t use most of those shots now,” Moore said. “My guy killed himself yesterday getting them. But there were clouds. It’s sunny today. I had to send him out again this morning.”

Thus began ABC’s preparations for the nationally televised game from the United Center. Here is a behind-the-scene looks of what goes into a telecast.

“Yeah, I’m going to have to get in touch with ESPN’s HR about this,” Van Gundy cracks.

Van Gundy is just joking. Once a gym rat, always a gym rat; he knows it is a pretty good gig to get paid for talking basketball.

Producer Tim Corrigan meets with his announcers, Mike Breen and Van Gundy, at breakfast prior to coming over to the arena. The game obviously is the main thing, but there is much more expected for a national telecast.

“Our No. 1 job is to document the event,” Corrigan said. “On top of that, you have to make viewers care about the players they are watching. Take (Bulls guard D.J. Augustin, who has been a surprise player). Not many people know about him. You want to tell his story.”

Breen has an idea of the ground he intends to cover.

“With an ABC game, you have to do a little bit more in personalizing the players,” Breen said. “Obviously not LeBron James, but guys like Jimmy Butler, Mario Chalmers. You have to tell people who they are and where they’ve been.”

For his part, Van Gundy leaves the storytelling element to Breen and Corrigan. He is wired for spontaneous, not scripted.

“I was watching an Oregon game yesterday, and the announcer said, ‘He’s all hopped up on quack,’” said Van Gundy, who felt that was a prepared line. “I don’t think that’s something I would come up with.

“Mike is a great point guard for me. He knows if I feel strongly about something, he’ll ask me about it. It’s not scripted.”

Indeed, Van Gundy’s scatter-shot style is his best virtue behind the microphone. Breen knows to expect the unexpected, making the pair one of the best announce teams in the business.

“He can talk about the game to what he did last night to his favorite TV show,” Breen said. “He has a broad spectrum. He’s a big reader of US magazine. He likes the gossip column on Hollywood as much as he does on the NBA.

“When there’s a pause, and he says, ‘You know, I want to say something,’ I go, ‘Let’s see what’s coming out of his mouth next.’ His unpredictability is what makes it so much fun.”

Breen and Van Gundy talk to the coaches a couple hours before the game. Bulls coach Tom Thibodeau worked as an assistant to Van Gundy and the pair remain close. He isn’t surprised “Thibs” has the Bulls playing good ball despite yet another season-ending injury to Derrick Rose.

“His team is a reflection of his personality,” Van Gundy said. “Hard, tough, competitive.”

After doing a quick spot for the morning SportsCenter, Breen and Van Gundy settle into their position at midcourt. Shortly after noon Central time, the players come on to the court for the opening tip. Showtime.

First quarter: Corrigan and Moore will have 13 cameras and 15 recording devices at their disposal for the game. They call the shots from a production truck situated within the bowels of the United Center. In front of them are screens, computers and a myriad of buttons. If you didn’t know better, you would think they were launching a rocket, not televising a basketball game.

Early on, Breen shows he knows how to press the right buttons when it comes to Van Gundy.

After a player-official exchange on the court, Breen asks, “Did you ever try to be friendly as a coach to an official?”

“Most of them are good guys,” Van Gundy said. “There are some who don’t have great conversational skills.”

“I don’t suppose you’re going to name any,” Breen said.

Lisa Salters, serving as an on-court reporter, tells one of the stories that are planned going into the telecast: James’ quick trip to Cleveland for the retirement of Zydrunas Ilgauskas.

Word, though, filters in to the truck that Joakim Noah’s father, tennis great Yannick Noah, is at the game. Corrigan asks Salters, “Lisa, would he be a good interview?”

“Let me find out,” Salters said.

Little did they know how good it would be.

As the first quarter closes out, Van Gundy notes about Augustin, “That’s a season saving signing for Chicago.”

Breen, without missing a beat, says, “Oh, nice alliteration there.”

Second quarter: “We might do Augustin coming out of the break,” Corrigan said. “Nobody knows who he is.”

It doesn’t happen. Instead, Salters finds Yannick Noah in the stands. Using a double screen, Moore is able to show Yannick watching his son. Yannick then cuts off Salters in mid sentence and jumps out of his chair while watching his son make a terrific defensive stop followed by a hustle play resulting in a foul on the offensive end. Yannick’s animated reaction makes for great television, a sure SportsCenter moment.

During a break, Breen tells Salters, “To back off and let him go was a great decision.”

Corrigan says, “You’ve got to get a little lucky now and then.”

At the end of the half, Salters is scheduled to get a Heat player coming off the floor. She says she is going to go with Dwyane Wade, who has 17 points, rather than James, the usual go-to guy who was held to four.

“It’s better to spread it around if you can so James doesn’t have to do it every time,” Salters said.

Third quarter: Noah continues to be the focus. During an exchange with an official, the Bulls center picks up a technical. However, it isn’t clear what happened.

“Does anybody have what Noah did?” Moore asks his replay crew.

A few replays come up, but it doesn’t show much of anything. As they come out of commercial, Corrigan says, “I’m going to show Noah talking to (the official) Tony Brothers after the timeout.”

Meanwhile, James, still stuck in single digits, is having an extraordinarily quiet game. It hardly is the first time the Bulls have shut him down.

Corrigan tells Breen he plans to show a graphic of James’ worst shooting games this year.

Breen counters, “Do we have a graphic of what LeBron does against Chicago?”

Corrigan says yes, and Breen says they should use that one first.

The graphic comes up, and Van Gundy does his dissection of James, saying it isn’t just the Bulls defense. “James has been complicit today,” Van Gundy said. “He hasn’t been aggressive….I think he’s sluggish today offensively.”

Despite James’ off game, the Heat are in control. Butler, though, hits a three-pointer near the end of the quarter to pull the Bulls within 8.

Fourth quarter: During the break, Salters gets short, clipped answers with Thibodeau, an intense coach who isn’t a fan of the in-game interview.

“Two days in a row,” groans Salters, who did the Bulls game on Friday. “This guy is killing me.”

Corrigan says, “You got (Yannick). You had a good day.”

With the Bulls mounting a comeback, Corrigan tells the crew to put a camera on Yannick. He is rewarded when after Joakim blocks a shot, they show Yannick’s reaction: He waves his finger much like Dikembe Mutombo in the car insurance ads.

With just over 7 minutes left, the Bulls cut the deficit to 1 point. When James returns to the game, Moore, knowing he now has a game, says, “This is what we want.”

Augustin helps fuel the Bulls surge. Again, Corrigan says, “Let’s do something on Augustin. Nobody knows who he is.” This time, they do it with a graphic and Breen and Van Gundy documenting the surprise player.

With the game coming down to its climax, and the game tied, all eyes are on one player.

When Butler strips away the ball from a driving James, there is a collective “Whoa” in the truck.

Overtime: It is March now, and the dog days of January and February are over. The games start to matter more with jostling for seeding and home court advantage at stake.

“You can start to see the light at the end of the tunnel,” Breen said before the game. “There is a different vibe now.”

You could hear it in Breen’s voice as overtime is about to begin. “This is NBA basketball,” he says.

In overtime, it is the Noah show, both on and off the court. As Noah makes a big rebound basketball, Moore cuts quickly to a shot of Yannick jumping out of his chair.

Van Gundy then adds: “I love his utter disdain for the Miami Heat. It is so great to watch.”

During a break, Corrigan asks Van Gundy if he now considers Noah a top 10 player in the league. “I don’t know. Seriously, I don’t know.”

The league’s No. 1 player, though, still is the focus. As the Bulls dominate overtime in the 95-88 victory, Corrigan goes, “Get LeBron going out.”

The telecast then wraps up with Salters doing an interview with a sitting Noah, who is too exhausted to stand. Breen then signs off. In the truck, Corrigan and Moore know a good game likely will result in a strong rating.

Corrigan and the crew then quickly retreat to waiting cars to try to catch flights at O’Hare. As they walk outside, the sun still is shining.

All in all, a good day in Chicago.

Ed Sherman is a veteran sports media writer who writes at The Sherman Report as well as USA Today, the Chicago Tribune and the National Sports Journalism Center.  Follow him on Twitter @Sherman_Report.