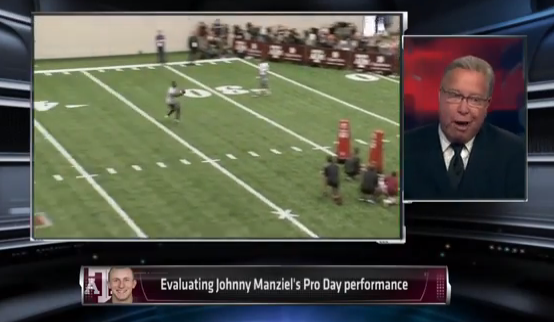 Remember back at the end of February when ESPN turned Ron Jaworski’s over-the-top thoughts on Johnny Manziel into the major news story of the day?  It was everything annoying about ESPN all wrapped up into one neat little package – celebrity obsession, making the news instead of covering it, embracing debate, and the ESPN Echo Chamber turning one analyst’s opinion into a 24/7 news story that everyone else had to pay attention to.  Even though Jaworski said those comments on Philly radio, ESPN unapologetically capitalized upon them.

Ron Jaworski originally said he would not draft Johnny Manziel in the first three rounds of the 2014 NFL Draft.  Of course, that position was ludicrous considering Manziel is a consensus Top 10 pick.  However, Jaws proudly stood by those comments on SportsCenter, Mike & Mike, NFL Live, and any other ESPN property that he could physically appear on without cloning himself.  After all, Jaws is tasked with being Bristol’s top quarterback guru for the (dramatic pause) National Football League.

In the weeks since though, the manufactured Jaworski-Manziel “controversy” has transitioned from a drama to a comedy as Jaws continually changes his tune on the former Heisman Trophy winner.  In fact, it’s become a full-fledged three-ring circus.  The only thing missing is an elephant juggling a beachball.

The backpedaling began after Manziel’s “impressive” pro day when Jaworski proclaimed on ESPN airwaves that he moved Johnny Football up his draft boards from a fourth round projection to a third round projection.  Because hey, completing passes against brooms shows what it really takes to play at the next level in the (dramatic pause) National Football League.

Tuesday, Jaworski appeared again on SportsCenter to talk about Manziel and rank his Top 5 Quarterbacks in the 2014 NFL Draft.  Inexplicably, he moved Johnny Football up his board again to #3 and ahead of Teddy Bridgewater.  Unfortunately for Jaws, there are more holes in this than there are in the plot of Sharknado.

1) Ron Jaworski “isn’t backing down from his statement” that he wouldn’t draft Johnny Manziel in the first three rounds but then says Johnny Manziel has “improved dramatically” in his mind.  All righty then.

2) Jaws admits that when he gave his initial thoughts on Manziel, he had only watched two games – LSU and Missouri.

3) ESPN’s top NFL quarterback analyst went on national television and delivered an authoritative opinion about a top prospect after only watching two tapes of games?  This makes as much sense as handing a starting job to Matt Flynn because he had that really good game that one time.  (Wait a second…)

Furthermore, LSU and Missouri weren’t just any two games – they were statistically the two worst games Manziel played in 2013.  Manziel averaged a 104 quarterback rating in those two games.  His season rating was a much more robust 172.9.

This is akin to watching Andrew Luck throw two interceptions in a loss against Oregon in 2011 and saying he would be a mid-round prospect.  Could you envision an NBA Draft analyst handpicking the two worst games of Anthony Davis’ tenure at Kentucky and concluding that he would be a draft bust?  Imagine Jay Bilas referencing Anthony Davis only managing 3 and 6 against Penn State and saying he’d never make it in the pros.

It’s not like Johnny Manziel is a mystery here either – he’s a Heisman Trophy winner!  There’s obviously plenty of good performances that outweigh the bad, and yet here we have Ron Jaworski admitting that he picked the two worst games of Manziel’s year on which to build his infamous opinion that he was a fourth rounder at best?  Who attaches a final grade to an exam after only checking the first two wrong answers?

4) Why is ESPN asking Jaworski to go on the air and give what are apparently incomplete talent evaluations and presenting them as the final authority on the matter?  It’s not only doing a disservice to the fans who are seeing Jaws’ QB rankings go back and forth like a game of ping pong, it’s doing a disservice to Jaworski himself.  Why not just wait until Jaworski’s rankings are done and then present a complete picture of the situation?  (Obviously, because that would be the sensible thing to do.)

Ron Jaworski has for many years been one of the most respected analysts at ESPN.  From his work on NFL Matchup to the studio to the NFL booth he’s always been a consummate professional and someone viewers could trust.  That’s why this Johnny Manziel saga (and the Colin Kaepernick one before that) is so frustrating.  He has to take some responsibility for emphatically stating an extreme opinion without being able to fully back it up.

This process is one of the problems with having so much time to kill between the combine and the May draft.  Opinions have to constantly be debated and discussed and scrutinized because we have nothing else better to do with our time.  What’s the point of sending Jaws out on SportsCenter to talk about the draft if his work is not even half done?  When he changes his mind so frequently and so emphatically it makes him look like he is making up stuff as he goes along… and that’s not the reputation Jaws has earned over the years.

These continually evolving QB rankings and Jaws’ love-hate relationship with Johnny Manziel is making a mockery of the situation.  One has to wonder if Johnny Football will eventually be Ron Jaworski’s #1 overall pick by the time the draft finally arrives.