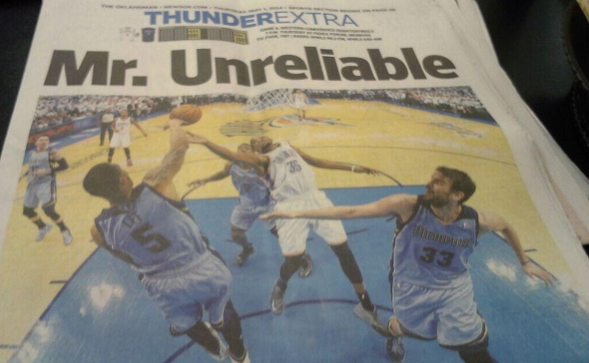 At the age of 25, Kevin Durant is a five-time NBA All-Star and a four-time league scoring champion. He’s led the Oklahoma City Thunder deep into the playoffs in each of the last three years. And yet in this year’s opening round matchup with the Memphis Grizzlies, Durant has struggled a bit, shooting just 40 percent from the field and failing to rise to the occasion in big moments.

That was enough for his hometown paper, The Oklahoman, to call Durant “Mr. Unreliable” on the front page of its Thursday sports section, about 36 hours after Durant missed what would have been the game-winning three-pointer in overtime at home.

In response, Durant took the high and humble road:

Durant on The Oklahoman's headline: "That's what they're supposed to write. I didn't come through for the team."

But the rest of the sports world knew it was a silly overreaction, including Durant’s mom:

As well as his brother:

It seems The Oklahoman has also come to terms with the fact the headline was too hyperbolic, with sports editor Mike Sherman issuing somewhat of an apology online:

We take great pride in our headlines about big sporting events and news in Oklahoma. Thursday’s headline in The Oklahoman on Kevin Durant’s performance in the Memphis series missed the mark.

The words were overstated and unduly harsh. The headline and presentation left the impression that we were commenting on Durant’s season, career or even character. We were not. We were referring only to the Memphis series.

The fact the headline and presentation left that impression with so many readers is proof that we failed.

This comes with the territory at times. Sports are emotional and so are people. People write headlines, not machines, and let’s be real: a lot of local sports writers and editors have rooting interests in the teams that represent their city. Whoever wrote this headline — and it likely wasn’t the article’s author, Berry Tramel — was probably fired up in the direct aftermath of a crushing loss.

That’s no excuse, because part of the editorial process requires professionals in this field to take a step back and consider potential bias or inequity. In this case, someone failed to do so despite having plenty of time to reconsider. At least the newspaper has admitted so.