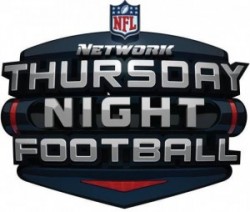 The National Football League is looking to sell half of the Thursday Night Football package that currently airs on NFL Network. For the last two seasons, NFL Network has aired 13 games. It appears that the NFL will increase the Thursday night schedule to 16 games meaning NFL Network and the winning bidder would split the package right down the middle.

Richard Sandomir of the New York Times reports that there would not be a shortage of bidders for the package.

Sports Business Journal's John Ourand tweets that this would be a one year deal that would be for the 2014 season.

An NFL spokesman confirmed to Awful Announcing that the league is seeking a new partner for the games:

"We want to accelerate the growth, quality and promotion of Thursday night NFL football. Bringing on a partner can help us accelerate our success across all the games. NFL Network has done a tremendous job building Thursday night and will retain games, but we are in discussions to air a part of the package with existing and potentially new broadcast and cable partners."

CBSSports.com's Ryan Wilson quoting network insider Jason La Canfora writes that the NFL is seeking roughly $800 million for the eight game package and the winner would likely air the first half of the schedule with NFL Network taking the second half of the season, although the winning bidder would probably want that portion.

The Times' Sandomir says that the NFL would prefer to see the games on a broadcast network on either one of its current partners, CBS, Fox or NBC, but would not rule out having them on cable, i.e., Fox Sports 1, NBCSN or TNT should Turner Sports put forth a bid.

The NFL spokesman told Awful Announcing that no postseason games would be part of the package so this bid would be strictly for the regular season.

Expect plenty of bidders for this package. NBC would love to win this to put the games on NBCSN and it would be full circle for the network formerly known as Versus. Back in 2006, the NFL almost placed Thursday Night Football on Versus for a pricetag of $400 million. The NFL eventually decided to air them on NFL Network and you know the rest of the story.

Fox Sports 1 would desperately want the NFL to add to its portfolio of MLB, NASCAR, college sports, UFC, and coming next year, U.S. Open golf and the World Cup.

Turner Sports has wanted to get the NFL back for TNT since losing the first half of the Sunday Night Football package in 1998.

And one cannot rule out ESPN putting in a bid to possibly place the games on ABC.

The package would be finalized sometime in the spring. We'll be watching to see who wins this latest round of the NFL's "Let's Make a Deal."