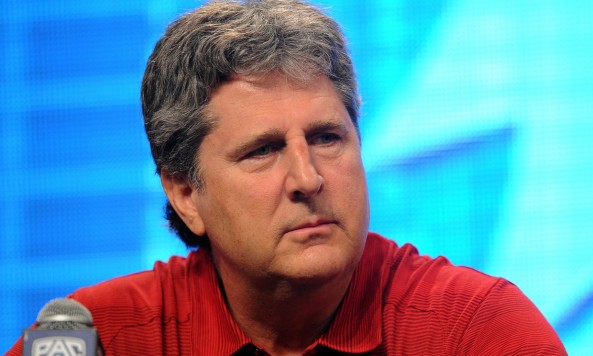 In 2012, Mike Leach did an interesting AMA (Ask Me Anything) on Reddit. He was back at it yesterday. You can read through the full AMA here, but here are some of the more interesting questions and answers from the session…

Question: I know you are big history buff, if you had to fill your coaching staff with historical figures who would you choose? For the sake of discussion you can’t pick a sports figure.

Question: If they made a movie about your life, who would play you (other than yourself)?

Leach: Maybe John Cusack. I think we have some similar looks and mannerisms.

Leach: The most exciting pirate is Edward Teach (Blackbeard). Probably the most productive one, and someone I would be fascinated to study more closely, would be Bartholomew Roberts.

Question: Coach, who wins in a battle, Godzilla or King Kong?

Leach: King Kong because he is much sharper looking and doesn’t have to rely on that bogus ray that shoots out of his mouth.

Question: How honored were you to meet the greatest coach of all time, Coach Eric Taylor?

Leach: Very honored. It was a lot of fun and he helped me find my way back to Lubbock, TX on the show. I also had the opportunity to meet director, Peter Berg, a true Renaissance man!

Question: Coach, there has always been a lot of talk about how hard it is to recruit to the Palouse, but you and your staff have been killing it so far this spring. What do you sell these young men on to come to Pullman?

We have just built the best Football Operations Building in the Pac 12 and we have quick, direct flights to many of the locations we recruit to. We are in a gorgeous setting with no freeways, in a place where a student-athlete can focus on his degree and football. This is led by our President, Elson S. Floyd who is celebrating his 7th anniversary as our College President, and our Athletic Director, Bill Moos who played here. Both of which talk to our recruits when they visit campus.

Question: What is your favorite sport to watch other than football? What teams/athletes do you root for?

Leach: Rugby is my favorite sport to watch. I root for New Zealand and Wales.

Question: The team is down by 15 with four minutes left when it punches in the ball on the outside zone read that hasn’t worked all day but finally beats the WILL who’s starting to dog it late in the game. Geronimo is the head coach. Does he go for 2 now, or kick the PAT and wait for the second opportunity?

Leach: Geronimo’s speed and tenacity in adverse conditions is going to allow him and his band of Chiricahua Apaches to score swiftly with that much time left. Illustrated in my book, “Geronimo: Leadership Strategies of an American Warrior,” they prepared for situations like this and were raised to respond to them starting as children. They would never flinch in a situation like this. Going for 1 or 2 would be based on their evaluation of the opponent, the terrain, and the resources they had to work with.

Question: Do you agree with Chip Kelly that the single biggest technological change in coaching over the past 20 years is instantaneous transfer of HD all-22 videos replacing dodgy film swaps by assistants at the airport?

Leach: I think that it is a big one because it has created a lot of involvement from fans and media being involved in the game several layers deeper. Basically, there is a lot more access to specific game footage than there has ever been and I think that is part of what has caused the game to explode in the fashion that it has.

Question: Of all the great QBs you’ve worked with, which one stands out to you as the most impressive as far as grasping and executing the Air Raid?

Leach: The best QB is always the one you are currently coaching!

Question: What does the eye rubbing/crying audible gesture about? I saw TTU QBs doing this and I think Wazzu QBs do it to. I think the coaches use this signal.

Leach: That is the signal for, sadly, our opponents are in trouble on this next play!

Question: What is your favorite tv show or book?