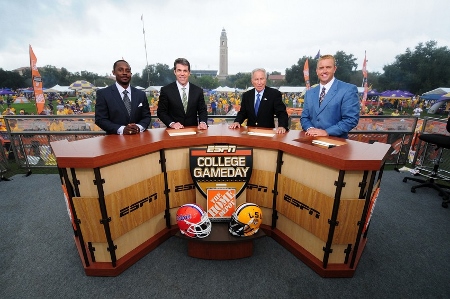 With the college football season kicking off in full tonight, we’re here to break down the nine biggest media questions for the upcoming campaign.  Sorry for breaking internet listicle law and not getting to ten…

The biggest media storyline for 2014 is in the main ESPN booth where Chris Fowler steps in for Brent Musburger alongside Kirk Herbstriet.  They are big shoes to fill.  Musburger is a legendary broadcasting voice who was still at the top of his game when ESPN shoved him aside to SEC Network.

Fowler is a great studio host… but can he deliver the goods in the #1 broadcast booth?  He’s already stated publicly he plans on a more conversational, perhaps less emotional broadcast than his predecessor.  Will that translate to the passion and pageantry of college football?  Will Fowler be an improvement upon Musburger’s work?  Or will fans miss the gambling references, tributes to women in the stands, and the general entertainment value Musburger brought to the show.

Fox was hoping that college football would be a major tentpole for Fox Sports 1.  Yet here we are at the start of their second fall campaign and the network is completely starting over.  No Saturday morning pregame show.  No Erin Andrews.  And a whole new cast of characters including Tim Brando, Dave Wannstedt, Bruce Feldman, Stewart Mandel, and others.

FS1 moves their pregame show to 12 AM ET on Fridays where they will have no other competition.  Their talent lineup looks ever improved with the addition of a veteran voice like Brando, respected journalists like Feldman and Mandel, and Rob Stone leading the main Fox broadcast group.  Oh, and there’s still Gus Johnson and Charles Davis.

The game lineup is better.  The coverage looks like it should be better.  The demand from viewers should be for Fox to deliver better.  FS1 isn’t a true freshman anymore.  If they can significantly improve their outreach to viewers and represent a legitimate alternative to ESPN within the college football space, it will go a long way in lifting the entire network.

3) Will CBS or NBC’s cable networks make an impact?

Quick – what college football rights do NBCSN and CBS Sports Network televise on a week-to-week basis?  I cover this industry for a living, and even I had to look it up.  (CBSSN covers the Mountain West, American, Conference USA, and Army/Navy.  NBCSN has rights to… the CAA.  I know you all have William & Mary at New Hampshire already circled on your calendars for October 11th.)

The truth is that the two cable entities are a non-factor when it comes to college football.  Their broadcast networks do well with the SEC and Notre Dame football respectively, but when it comes to the daily national conversation around the sport, these two are on the outside looking in.  At least CBS Sports Network is trying to expand their college football presence though, and that’s evidenced by sending their top team of Verne Lundquist and Gary Danielson to call Ohio State-Navy this Saturday.  That game alone got CBS Sports Network added to the Buckeye Cable lineup to thousands of Ohio sports fans.

Even before they launched the brand new SEC Network, ESPN faced complaints from other parts of the country that they were biased towards the conference.  You’d be hard pressed to find an ESPN analyst who didn’t extol the virtues of the SEC and the tiresome “1 loss SEC team versus undefeated non-SEC team” debate.

Now that the network has a financial stake in the league’s success, those ethical questions are going to be magnified tenfold.  Already we’ve seen SEC Network have a sustained presence on ESPN today with cut-ins to the SEC Nation set live at Texas A&M-South Carolina.  Will that be a regular phenomenon throughout the season and will the SEC see even more sustained coverage on ESPN as an entity existing almost above the rest of college football?

The impact is tangible.  And it’s not just from those watching ESPN’s journalistic integrity closely and seeing whether or not they can separate church (covering the sport objectively) and state (their business relationship with the SEC).  It’s from influencing the minds of the voters and the rankings, who then may influence the selection committee.

If ESPN pushes the SEC and the SEC Network hard on their airwaves to promote the network and the conference brand, look for complaints from outside the southeast to grow exponentially this season.