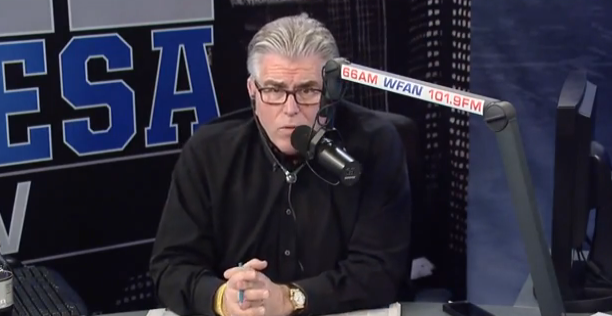 Tuesday presented a historic moment in the history of sports talk radio – Mike Francesa had a 30 minute segment about soccer.  The pope has long made his disinterest in soccer well known.  When YES was advertising the first NYCFC press conference, Francesa mocked the sport and said among other things, “My God I could care less what soccer team they own.  You couldn’t get me involved in that if my life depended on it.”

My, how times have changed.  With the 2014 World Cup setting ratings records once again for ESPN, the last person in America you would expect to jump on the World Cup bandwagon has finally come aboard.  Hell froze over, pigs flew, and Mike Francesa had an entire segment devoted to soccer on his radio program.

Francesa interviewed St. John’s men’s soccer head coach Dave Masur on the program yesterday, because who else would he get on his program, right?  Masur is a man who needs no introduction according to Francesa, but then he goes ahead and gives him one anyways.

Incredibly, the interview turned into a half hour tutorial as Masur (God bless him) taught Mikey about everything about the sport – from the fundamentals to who the best players really are to what the World Cup actually is.  Out of all the clips that have been featured over the years since Mike Francesa and Mongo Nation became a viral internet sensation, this is by far my favorite clip.  This was surreal radio.  It was like an out-of-body experience for anyone who watched or listened.  The only thing I could compare it to would be Rush Limbaugh getting some pointers on liberalism.

And the fact that it was syndicated on national television made it all the more delicious.  While ESPN was televising the World Cup, here on Fox Sports 1 was a nationally syndicated radio host getting a Soccer for Dummies crash course.

Below is the audio via the great @OrdioMongo and then the 12 Best Mike Francesa Soccer Questions.  And remember, these are all very, very real questions:

1) “Is the World Cup like Christmas for you?  Is that like the Super Bowl or the World Series?”

* You can see where this is going…

2) “Are the best players in the world, the guys who are international stars… are every one of them participating in this event?”

3) “If I brought you in and say, Dave, listen, I want America to win a World Cup in the next 3 World Cup events.  I’ll give you a blank check.  It’s not about buying the best players from other teams, I want to do it legitimately.  First of all is it humanly possible.  Money’s not an issue.  What would you do to get there if it was at all possible to do?”

* As if the United States could buy the citizenship of foreign players to come and play for our country.  Can Obama write a $100 million dollar check to Ronaldo to put on the red, white, and blue before we play Portugal?

4) “If you took an NCAA Tournament All-Star team, how good would that team be on a world – would they be competitive?”

7) “How many of these guys who are coaching these teams do you know?  Do you know all these coaches?”

* As if the head coach at St. John’s University has Roy Hodgson and Luiz Felipe Scolari on his speed dial.

8) “How do you calculate what’s going on, how do you know how many minutes they’re going to put on at the end?  That drives me crazy.”

10) “I saw a guy make a winning kick with a lefty kick, are there guys who kick with both legs?”

* WHAT IS THIS WONDROUS, MYTHICAL SPORT WHERE SUPERATHLETES USE BOTH OF THEIR WORKING LEGS FOR CONSTRUCTIVE PURPOSES?!?!

11) “For all of us who just don’t get it… what do we fool Americans miss about this sport?”

12) “Is there any special prize… What does the team get, what do they actually get if they win the World Cup?  Is it just a trophy?  Is there money involved?”

I hate playing the uppity soccer fan card at new fans learning about the sport during the World Cup.  The insular, territorial nature of soccer fans, as if there’s some test everyone has to pass to be worthy to get into the exclusive club, is one of the worst things about American soccer fans.  But…. given Mike Francesa’s past flippant stance towards the sport, I’m willing to make an exception this one time and laugh along as the sports pope marvels in wonder at some of the world’s best athletes being able to kick a ball with both their right and left foot.

In all seriousness though, if Mike Francesa of all people feels the need to talk about the World Cup, that’s a great day for soccer in this country.  Maybe Mikey can have on Roberto Martinez next to break down the touranment.  (“Tell me now where is Evahtin, exactly.”)

Now if only his callers can get in on the action and ask for Mike’s thoughts on Spain potentially playing with a false nine, then we’ll really start to have some fun.