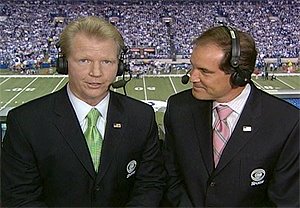 Last week we counted down the 9 Biggest Media Questions for the 2014 College Football Season.  And because we’ve agreed to abide by the Sports Blogging Charter of 2002, we’re contractually obligated to now give the same treatment to the NFL.  (With a bonus question, too.)

So here now is our countdown of the biggest media questions for the NFL season including the Redskins, Michael Sam, Erin Andrews, Thursday Night Football and a lot more.  And wouldn’t you know, we made it through an entire list without any mention of Johnny Manziel.  Well… except for that one.

1) How big will the Redskins nickname debate get?

It’s a controversy that has dominated debates everywhere from ESPN to Fox News and MSNBC.  It’s seen firm stances taken by everyone from Peter King to Bill Simmons to Mike Carey.  It’s also seen polling that shows the feelings of the American public doesn’t match that of the American media.

The Washington Redskins nickname debate is not going anywhere.

And although it’s seen much coverage in the last month, it will be intriguing to see how big the nickname debate becomes during the course of the season.  You can bet that there will be a direct correlation between the success of the team and the intensity of this debate.

But there’s another big factor that will ensure this remains a major story over the course of the season.  When an NFL announcer makes a serious effort to boycott “Redskins” over the course of a game it will be noticeable.  And make no mistake, over 16 games this season it will happen at least once this season.

People looking to just now hop aboard trendy PC movements aside, you would have to think Roger Goodell would stop and take serious notice when an NFL franchise has its name boycotted during an NFL telecast.

The nickname will change.  The media pressure and negative publicity will eventually become too much to bear for the league.  This season, and how much attention the debate receives, will go a long way in deciding how quickly that change will take place.

2) How will the media continue to cover Michael Sam?

The media has been a dominating force, often for the wrong reasons, in the story of Michael Sam.  Now that he’s been signed to the Cowboys practice squad, how will the media react?

On one hand, it’s highly unusual for any practice squad player to get any coverage whatsoever.  And once the season begins, there’s going to be so much news happening across the NFL that it’s going to be hard for anyone to have a dedicated focus to someone outside a 53 man roster.

On the other hand, Michael Sam is no normal practice squad player.

Additionally, this is the Cowboys we’re talking about – not exactly the most media-shy team in professional sports.

The major question will be whether or not the media can show some constraint when it comes to Sam and learn from the regrettable ESPN/Josina Anderson report.  It’s the media that is the distraction, not Michael Sam.  If Sam makes the gameday squad at some point this season, it will be one of the seminal moments in league history.  The media would be wise to allow that moment, if it happens, to breathe and exist on its own merit.

To be honest, the media can learn a lot from Jason Collins and the last NBA season.  You’ll remember there were no reports about whether or not he was showering with teammates.

3) How successful will Thursday Night Football be for CBS?

The NFL pulled off a brilliant coup with Thursday Night Football.  Not only do they get a full season of games to put on their own channel, but they got a network to pay them hundreds of millions of dollars to air half the season under a unique syndication arrangement.  Furthermore, they got CBS to sign a one-year contract so if and when it does succeed, the package can go to the highest bidder once again.

Thursday Night Football on NFL Network has been criticized for its sloppy play and lack of quality games.  But CBS has been given a good schedule for the first half of the season when they will air games to a nationwide audience.  While it’s doubtful that package will reach the heights of SNF on NBC and compete for the title of #1 in primetime, ratings should still be huge.  Just how big those ratings will be, with the NFL entering into the what is arguably the most competitive night on network television, will say a lot about just how dominant the league is as the top sports and entertainment brand in America.

4) Will America fall in love with The Bird and The Beard?

With the advent of CBS taking control of Thursday Night Football, Jim Nantz and Phil Simms are in line to announce more games over the course of the 2014 season than any pair before them.  Not only will they call the entire Thursday package, but they’ll also call most national doubleheader windows when CBS has the late afternoon showcase at 4:30 PM ET.

While that’s a great opportunity for Nantz and Simms, it also presents a terrific opportunity for when they will be taking Sundays off as Ian Eagle and Dan Fouts become CBS’s de facto #1 team.

The promotion of Eagle and Fouts to a playoff spot for CBS is well deserved after they’ve been the most critically acclaimed broadcast team working every Sunday.  Finally, CBS is rewarding the pair after several years of work that has earned a bigger assignment.  The pair have a fantastic chemistry and a great balance of insight and humor during a telecast.  It’ll be great to hear them call some bigger games for CBS this year and their promotion should be welcomed by fans.

5) How much pressure will be on Erin Andrews in succeeding Pam Oliver?

Perhaps the biggest and most publicized change this season in the NFL media is Fox Sports giving Pam Oliver’s job to Erin Andrews.  This has created controversy as Oliver has publicly opened up about Fox’s obsession with “young, blond, and hot” and her demotion after almost two decades of work.

Much of the attention has rested on Oliver, her disappointment after losing the job, and the double standards with ushering experienced women off the sidelines.  Andrews has conspicuously been out of the spotlight while this story has evolved.  When the season starts you can bet there will be observers closely watching Andrews’ work to judge if she can live up to the standard of her predecessor.

Andrews is used to the pressure and the spotlight, but it will certainly be magnified this year.