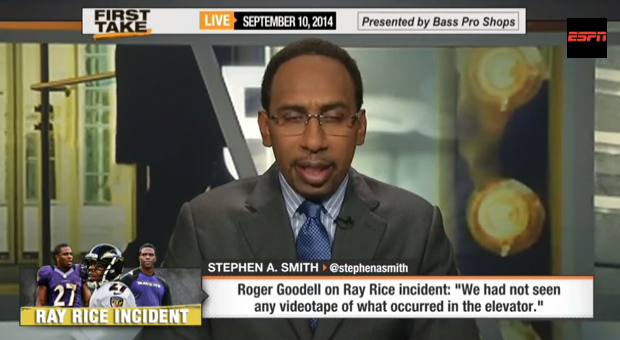 Stephen A. Smith just can’t help himself, can he?

A month after almost losing his job at ESPN over comments on women provoking domestic violence and being suspended, Stephen A. Smith has voiced his opinion that Roger Goodell’s job as NFL commissioner should not be in jeopardy.  Perhaps he speaks from a position of empathy.

Being the cool and calculating figure that he is, Smith delivered a very thoughtful, carefully-worded discourse on why Goodell should keep his job and why the National Organization for Women might be misguided on calling for Goodell to resign.

Actually…. scratch that.  Smith unleashed a bizarre and furious rant at NOW, criticizing the organization for having the gall to target Goodell.

Smith was so angry with NOW that he bulldozed right through Cari Champion’s attempt to calm him down and ranted through the closing credits.  It’s becoming more and more apparent that Skip Bayless is the sensible one on this show.  Chew on that for a while.

Smith said that NOW President Terry O’Neill was “off her rocker” and had “lost her mind.”

ESPN has not made video available, but here’s the audio that ended First Take today:

Has nobody here learned their lesson?  There’s nothing in this clip quite as offensive as the first rant that got him suspended, but it’s incredibly tone-deaf.  And the fact that Smith shows no signs of dialing back his commentary or generally thinking before speaking is mind-blowing.  Surely someone in the control room at ESPN had to be watching this unfold, buried their face in their hands, and thought to themselves, “please God, not again.”

To make matters even better, Smith once again doubled down on Twitter (as he did before) and even tried to use his rant as a publicity ploy for his radio show to get callers.

Not a damn soul is hiding this way. I dare — double dare — Y'all to call me with this B.S. y'all are spewing. Pretty Please. 888.MadDodg6

As if I wasn't pissed off enough, now the National Organization For Woman is calling for Roger Goodell's Resignation. $&@ Ridiculous. Oohhhh

I can't get to SiriusXM soon enough to do my radio show. I can't believe this. Talk to ya'll at 1pm. SiriusXM MadDog Radio (Channel 85).

Sending Stephen A. Smith out to talk about domestic violence again and again is one of the most insane things I’ve seen in television.  Expecting Smith to say something intelligent on this issue is like expecting Wile E. Coyote to get the best of the Road Runner.

Chances Smith is suspended by ESPN for this latest outburst? 25%.