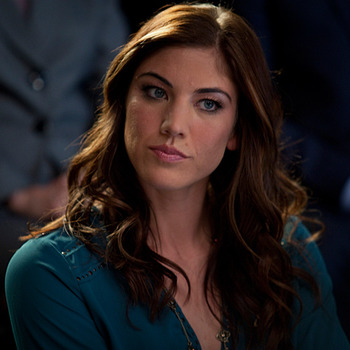 One of the biggest stars in her sport has been the subject of domestic violence charges for months now, and only just now are we trying to exert the effort to care about it.

In August, a day after her trial date was set on charges that she struck her sister and nephew after being arrested in June, US Soccer sent out a promotion praising goalkeeper Hope Solo and promoting her quest to becomes the USWNT’s all-time shutout leader.

Solo became the all-time USWNT shutout leader on September 13th after a game against Mexico and received public congratuations from the likes of Major League Soccer.

Congrats to @HopeSolo in becoming @ussoccer_wnt's all-time leader in shutouts with 72. The #USWNT won 8-0 vs. Mexico. pic.twitter.com/x0edNP0slF

On September 18th, she captained the USWNT in another victory against Mexico.

And the protests against US Soccer and Solo never got above a whisper.

But the tide seemed to change on September 19th.  That’s when the nation suddenly started caring about Hope Solo.

That day articles were posted in major publications by two of the country’s top female sportswriters.  Both Juliet Macur of the New York Times and Cindy Boren of the Washington Post touched on the Solo case and the lack of attention therein.  Both writers were strong in their rebukes of US Soccer’s silence.

Macur in the Times:

But look past the patina of glee and here’s what you will see: a team and a league — not named the N.F.L. this time — that are tone-deaf when it comes to domestic violence and how they handle players who have been accused of it.

It takes a lot to match the N.F.L. these days when it comes to missteps in the handling of players charged with assaulting family members and loved ones. But Thursday, at a time when domestic violence in sports is dominating the national conversation, U.S. Soccer did just that — again — by keeping Solo in goal when she shouldn’t have been anywhere near it.

While U.S. Soccer doesn’t have the same high profile as the NFL, how do the cases differ? Aren’t women’s soccer players just as much role models as male football players? The goalkeeping record is an an important one, both for Solo and for women’s soccer, but does it really trump an accusation of domestic violence? Why is the notion of awaiting due process so inconsistently applied? And why aren’t more people talking about the fact that domestic violence isn’t simply an issue of men against women?

Those articles seem to have kickstarted the campaign to begin to turn our attention to Hope Solo and the lack of action from US Soccer.  Everyone from espnW to Jezebel to the local media in Seattle turned their attention to Solo and the silence from the USWNT in the wake of the NFL’s domestic violence crisis.

As those articles made the rounds, questions were then asked of Nike and why they have stood by Solo after dumping Adrian Peterson.  Questions were asked of US Soccer about why they allowed Solo to not just play, but captain the national team.  Predictably, there has also been backlash to the backlash with responses on why Solo should not be compared to Rice and caught up in the nationwide crusade against domestic violence in the same way.

Although Solo’s case hasn’t changed since she was charged in the summer, there was certainly an evolution in intensity of coverage over the last few days.  Check out this Google trends chart for “Hope Solo domestic violence” and you’ll see a dramatic rise from the 19th to the 21st.

Why the sudden interest in Hope Solo’s case?  From a pure media analysis standpoint, it’s one of the most fascinating subplots I can remember in recent times.  Here we have a prominent athlete alleged with a crime who continues to play and set records while flying under the national radar for months.  And then suddenly, with the snap of a finger, the media has collectively agreed that she and US Soccer should fall under heavy scrutiny for her domestic violence case.

Just how much has the Solo case changed in the public eye?  Take a look at these two official US Soccer responses to Christine Brennan of USA Today.  Brennan was one of the only voices covering the Solo story back in August, before it became the scandal du jour.

US Soccer to Christine Brennan on August 19th:

“We are aware that Hope is handling a personal situation at the moment,” said Neil Buethe, U.S. Soccer director of communications. “At the same time, she has an opportunity to set a significant record that speaks to her hard work and dedication over the years with the National Team. While considering all factors involved, we believe that we should recognize that in the proper way.”

US Soccer to Christine Brennan on September 23rd:

“U.S. Soccer takes the issue of domestic violence very seriously,” U.S. Soccer president Sunil Gulati said in an e-mailed statement Monday night. “From the beginning, we considered the information available and have taken a deliberate and thoughtful approach regarding Hope Solo’s status with the National Team. Based on that information, U.S. Soccer stands by our decision to allow her to participate with the team as the legal process unfolds. If new information becomes available we will carefully consider it.”

Change in tone, much?  In the course of a month, dismissing Solo’s case as a “personal situation” became the very righteous stance of “we take the issue of domestic violence very seriously.”  And this new sentiment from US Soccer is solely due to the media pressure now placed upon them.

The increased media attention has been the only variable in Solo’s story since charges were filed.

After weeks of silence, US Soccer had to say something because of the growing media scrutiny.  And that’s what is really at play here.  The increased spotlight on Solo boils down to this – she is filling the media void.  With Ray Rice, Adrian Peterson, and Greg Hardy now all out of the league for the time being our focus and outrage has to be targeted at someone, does it not?  This story isn’t going away anytime soon and with the attention on domestic violence and the lack of developments from the NFL, we have to look somewhere else to keep the story moving forward.

Solo and US Soccer are an easy target because they got caught out while the nation started paying attention to domestic violence crimes and weren’t smart enough to realize that sooner or later we would come knocking at their door.  Call it the Twitter mob, call it the impact of new media, call it what you want, but it’s clear that mass media today operates in a pack mentality.  Today that pack is circling around Hope Solo.  It moves from story to story, developing an intensely driven hyper-focus on whatever issue or person seems to be the leading story that day.

Speaking of… does anybody remember Michael Sam?