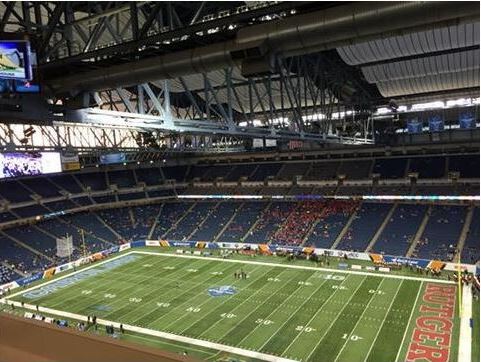 As we’re firmly entrenched in the bowl season, the early bowl games have not been drawing at the stadium. This year, there are 39 college football postseason, four more than last season. Consider nearly 20 years ago in the 1995-96 bowl season when there were just 18 games. With so much inventory, it’s not surprising that the interest for the games in their host cities isn’t that high.

For the new Camellia Bowl, the game was played in a stadium with a capacity of 25,000 and attendance was announced at 20,256. The inaugural Bahamas Bowl drew only 13,667. Some of the games are playing to sparse crowds as evidenced by the following pictures on Twitter.

Those are rather ugly scenes and for the early bowls, the attendance is down from previous years while the ratings are a mixed bag

For the new bowls, the numbers are as follows:

By comparison, the Texas State High School Football Class 6A, Division II title game had an attendance of 52,308 at the home of the Dallas Cowboys, surpassing many of the bowl games to date.

So what does this tell us? That ESPN likes to air the bowl games because it provides fresh content at a normally dead time of year for sports. After all, over 25% of bowl games are owned by ESPN. It may not like the lack of fans in the stands, but it does like seeing viewership of more than one million. Ratings may be down, but the viewership has remained consistent ranging from 1.1 million to 1.6 million. And considering these bowl games offer live event coverage, those numbers are going to better almost anything else ESPN would be able to draw.

As we approach the New Year’s Day bowls, attendance should go up for this week’s games as well as the traditional bowls such as the Cotton, Sugar, Fiesta, Rose, Orange and Peach. In addition, the ratings and viewership will see significant increases as fan interest goes up.

The early bowls in the college football postseason may not move the meter compared to the later games, but as long as ESPN is in the bowl business, it has a vested interest to keep as many contests up and running to feed an audience that appears to be hungry for football during the holiday season. And be prepared for one more bowl to enter the scene next year. As long as ESPN can make a profit from these games being televised, there’s going to be more of them. No matter how many fans are in the stands.