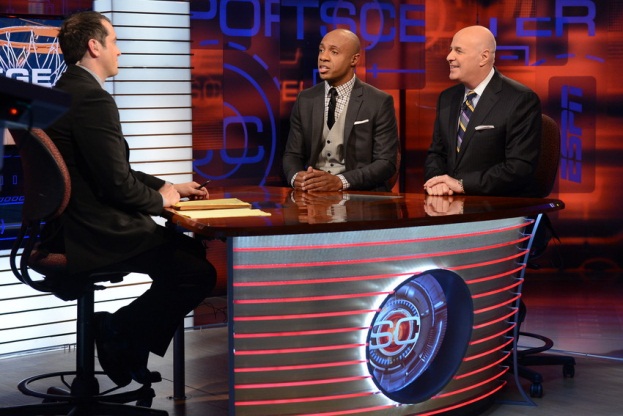 Williams was a former national champion and Wooden Award winner at Duke.  In his early 30s, he’s the veteran analyst of the pair working at ESPN since 2008.  In those six years, Williams has come a long way as an analyst and gradually climbed through the ranks in Bristol to earn this opportunity.

At the other end of the spectrum, the longtime coach in his late 50s finds himself as one of the newest rising stars of the industry.  After almost a decade at Virginia Tech, Greenberg has been an instant hit at ESPN after debuting in 2012 and his future appears to be bright behind the desk.

Greenberg, Williams, and the new GameDay crew will make their debut on November 18th at the Champions Classic in Indianapolis.  That night national powers Michigan State and Duke as well as Kansas and Kentucky will square off in a doubleheader.

The basketball version of GameDay has some years to go before it can match the cultural phenomenon that is the football version.  However, the roundball edition will be greatly helped this year by something that has been a hallmark for its brethren – weekly flexible scheduling.  As is the case throughout the fall, the basketball version of College GameDay will be announced the week prior as the show travels around the nation.

To get a sneak peek at the new version of College GameDay, I was joined on a special edition of the AA Podcast by both Greenberg and Williams on Monday afternoon.

On the podcast, Seth and Jay take us through their ESPN careers and getting the call to join GameDay and the different paths they took.  Also, there’s plenty of lively banter between the two on topics ranging from their on-set chemistry to the current state of college basketball and paying players.  They even delver into their relationship and and how it’s evolved after a rocky start.  (The story involves several missed calls from Greenberg to Williams after comments Jay made about Virginia Tech while calling a game.)  There’s also plenty of shoutouts for Jay Bilas… who we’ll try to make sure to invite to the party next time.  We also take a little time to preview the upcoming season as well.

It’s a small taste of what is to come throughout the college basketball season.  Hopefully you’ll enjoy the show.  Don’t worry Rece Davis, you have nothing to worry about….